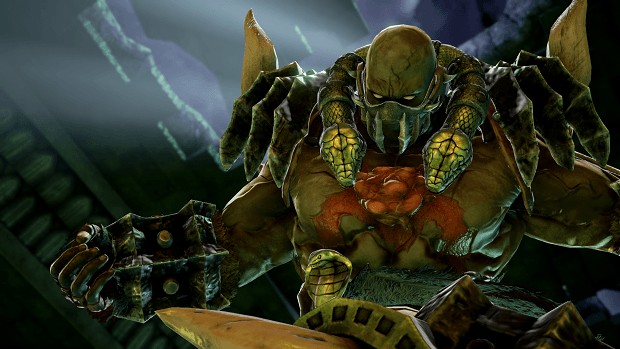 Our Soul Calibur 6 Astaroth Strategy Guide will help you learn everything you need to know about getting started with Astaroth, matchups, Soul Charge, Reversal Edge, alongside some tips and tricks to help you win.

This character is best known for his long-range of attacks and the damage that comes with them. In addition to a high damage on hit, his special attacks carry a good pushback effect even when blocked, allowing him to remain safe and unpunished.

He can also grapple enemies for extra damage. Thus, this “Demonic Guard” uses his overwhelming size and strength to remain a formidable foe.

Although you will need to move in close for grappling your opponent and make sure that they are not crouching, if you land one, the damage is immense.

For some good combos after the grapple, you can try Flight of the Wicked (HC + A + G) into Hades Cannon by inputting down and holding d + B. You can also perform Titan Bomb by inputting QCF + A + G.

For moving in, use the Bull Rush move by holding F + K. Hades Knee (f + K) can counter hit opponents and you can get additional damage with Brutal Grasp (d/f + A + G) that works on downed opponents too.

There are also grabs with armor properties called Revenge Grabs. These are invulnerable to a single hit of high or mid attack.

Perform either the Vicious Madness (f, F + A + G) or Cursed Earth (b, B + A + G) to grab your opponents even when they attack you.

Quick Attacks
Since Astaroth’s toolkit is comprised of mostly slow attacks and grapples, you need some quick attacks to ease of the pressure.

For this purpose, you have the Bear Fang (b + B) and Decimation (b + A, A). Holding the directional input on these two moves will turn them into break-attacks.

Another decent move is the Hades Divide (b, hold B + B) which unleashes a mid-strike good for counter-hitting and even has break-attack properties. For long ranges, you can attempt to use the Titan Ax (d + A + B) or Flip Titan Ax (u + A + B).

Lastly, since throws whiff on crouching opponents, you need to utilize some good low attacks. These include Bludgeoning Crush (d + A + G) and Drop of Lava (d/b + A + G).

Both of these have very little start-up frames, so you can use them to counter opponent’s unsafe moves.

Critical Edge Throw
The “Final Anguish” Critical Edge is a throw that deals devastating damage to standing opponents and has no grapple-break to neutralize it.

It may even hit crouching opponents, should they take too long to dodge the throw by crouching. The throw cannot be dodged any other way.

Soul Charge
In addition to getting more options to close in with the Cerberus Surge (QCF + A), this Soul Charging state also offers two new moves with revenge or armor properties.