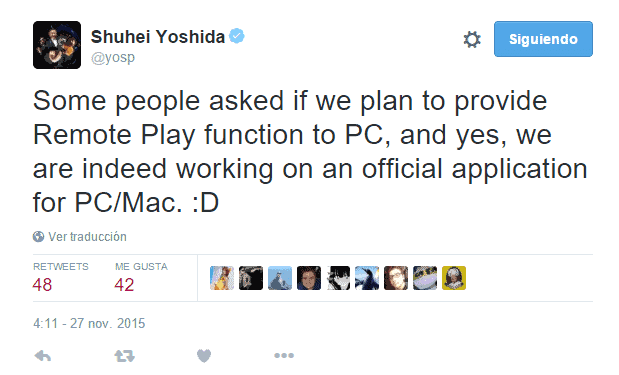 Since Sony announced PlayStation 4 remote play feature, many wanted to see a similar function for PC/Mac as well. PlayStation 4 games are already playable via PS Vita but it would have been great if PC users could also join-in without having to buy a Vita for Remote Play.

Recently, an unofficial app came out which allowed PC users to play PS4 games on their systems through Remote Play. A developer who operates under the name “Twisted” is behind this app. It brought PS4 to PC streaming to reality but it came at a price.

The app wasn’t free and Twisted said it was the only way to support his project, fair enough. However, his app may not gain the amount of success many thought it would because Sony has made a very exciting announcement.

According to the President of Worldwide Studios, Shuhei Yoshida, Sony is working on an official app for PS4 to PC streaming.

This puts a dent is Twisted’s unofficial app and the plans he had for it. Surely, Sony won’t charge for such an app and as we know, fans would prefer using an official piece of software. Now unless Sony screws it up somehow, Twisted should start looking for a different project to work on.
About the Author