Sony’s Facebook Team Taunts Microsoft for Xbox One Being 720p 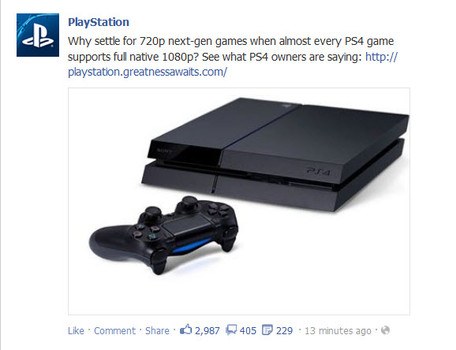 Earlier on the PS4’s launch day, Microsoft congratulated Sony for the launch of the PS4 while Sony’s Facebook Marketing Team did the complete opposite by taking a shot at Microsoft just hours before the Xbox One’s global launch.

The difference has been a favourite topic amongst the console players vying to make their choice look superior to the competition but it is the first time that Sony has used it in it’s marketing strategy.

Although it was later taken down and congratulatory tweets were made by Shuhei Yoshida and Adamn Boyes on Xbox One’s Launch, another veiled and timid shot took its place on Facebook; touting the PS4’s built-in game-streaming on Ustream and Twitch taking after Microsoft’s recent announcement about livestreaming not being available to Xbox One until early 2014.

For now, Xbox One players can record and share their gameplay videos on Xbox Live or transfer them to their Skydrive Account.