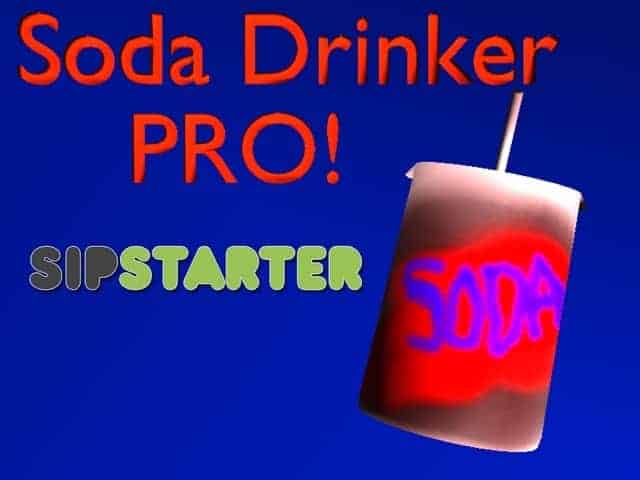 Developer William Brierly has taken to Kickstarter once more for the quirky simulation game, Soda Drinker Pro. This oddest of phenomena is asking for $15 to run its beverage-enjoying adventure to the next level.

For the uninitiated, Soda Drinker Pro is a low resolution first-person game where the main goal is to drink a nice refreshing cup of soda, while walking to quickly hand-painted levels.

That’s really it; you walk around and drink soda. Sometimes you pick up a new cup and hear your conscience elatedly echo: “Bonus soda!”

You could connect Soda Drinker Pro to a Dadaist commentary. It rejects the normal convention of games, from their appearance to their goals, in an pattern of nonsensical designs.

Its Kickstarter project has a low goal, but it does have a breakdown of costs for transparency. Here’s a list of what the $15 will go to:

Soda Drinker Pro is built on the Unity engine, which offers free alternatives for development, which could justify the lower price tag. Still, man-hours will be put in to create new levels and characters for people that pledge to the campaign.

Naturally, this timed pitch is related to the recent roaring success of a Kickstarter campaign that offered potato salad for a $10 initial goal and is now raking in tens of thousands in funs. It’s taken us potato salad to know how to “hack” Kickstarter.

Case in point: With the campaign just started off, Soda Drinker Pro already achieved its funding target of $15, with one backer at $50. More than likely, the contribution is made by William Brierly or an acquaintance, to be assured of any additional backer money.

Moreover, in the psychology that an initial goal is both low and proven successful already, many fair-weather donations can be attracted, which could be intimidated by higher goals.

For instance, the developer previously tried a regular pitch for Vivian Clark, a game hidden inside of Soda Drinker Pro, but it failed to gain momentum for a $20,000 target.