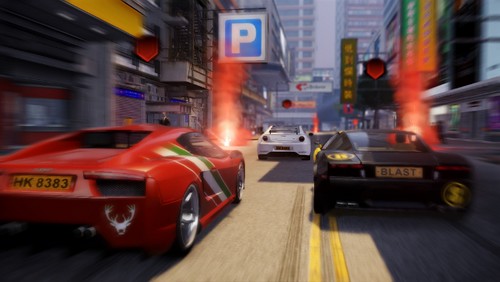 The Sleeping Dogs Street Races can be perilously exhilarating. If you win, you get a hefty cash reward and bragging right, but if you lose, you stand to lose your ride, your life or worse – Your money.

You’re introduced to the system in the “Hotshot” case, and as long as you’ve got a vehicle fast enough, you can participate in any of the races.

A few things to remember, deviating too much from the course can get you disqualified, though there are some side streets you can take advantage of to get a lead.

Rendering your car or motorbike unrideable will get you disqualified, and so will stepping out of the vehicle.

Once you’ve joined the racing scene, you’ll have access to the C-class car races after inheriting a formerly impounded race car, and B-class bike races after you earn your first safehouse and receive your starting motorcycle. For the rest of the races, however, you’ll have to cough up some cash and get an appropriate ride.

No Sweat
Found at North Point, this C-class race is pretty easy, the only thing to watch out for is the road center divider near the end, when you exit a thin alley into the street.
Reward: $10,000

Mailman
This race starts near Soho, and you’ll be wise to get a car with good handling, because the beginning of the race has you dancing through narrow single lane roads with lots of tight turns.
Reward: $10,000

Lost
This one is your first B-rank race and starts in Aberdeen. There are quite a few curves in this one, and most have a significant amount of civilian traffic in them.

Watch out for the stairs on the sidewalks in the beginning of the track, as it’s an easy place to start barrel rolling badly.
Reward: $15,000

Detour
Detour is a B-class circuit through Aberdeen that starts at the harbor and ends at the harbor. There’a short stint on the freeway, but the most hazardous part of the course is the end, where you need to avoid pedestrians and navigate stairways.
Reward: $20,000

Crippling Road
Another Race in North Point, this B-class is pretty straightforward. Since you start on a four lane road, feel free to put the pedal to the metal and get a good lead before you get back to the two lane streets.
Reward: $20,000

Midtown
This is your first A-class race and takes place on the busy streets of Central. Plenty to be worried about in this one as you’ll spend plenty of your time on four-lane roads and the freeway where there’s always the potential for a disastrous accident that’ll lose you the race. You could die too, but that’s unimportant.
Reward: $25,000

The Queen
An annoying A-rank race that traverses the road between Central and Aberdeen, there’s a real potential of going through several A-class cars on your journey to complete this.

The mountain road has an obscene amount of brutal curves and it’ll take all your driving skill to avoid turning that million dollar Mercedes into scrap metal.
Reward: $25,000

Unconventional
Another A-class through Central, the only noteworthy thing on this one is the jump halfway through where you have to hit a stairwell just before an ally just right or you’ll faceplant straight into one of the buildings to the sides.

Besides that there’s an area under an overpass with several support pillars ready for you to run headlong into.
Reward: $25,000

Summit
Another in-betweener, Summit takes you from Central to Kennedy Town. The start is similar to the Queen, with a lot of curves in all the wrong places.

The latter half is all straight though, featuring a stunt ramp jump to the freeway right at the end which will make you 25% more awesome.
Reward: $25,000

Wall Street
Another annoying A-rank through Central, The biggest dangers on Wall Street are the other drivers, who will sometimes ram you mid turn, completely messing everything up. Besides that you should watch out for the sharp turns near the end.
Reward: $25,000

Dock Yard
The Dock Yard is the first motorbike race and is a B-rank in Kennedy Town. It’s pretty good as far as introductory races go. Be careful not to hit anything too hard, as it’s much easier to be ejected from a motorcycle than a car, and that will result in disqualification.
Reward: $20,000

Indecision
Indecision is a B-class in Aberdeen and this time you’re up against some tough turn. Be sure to have good handling of your vehicle as ending up in the wrong lane or on the sidewalks can get you unhorsed in a big hurry.
Reward: $20,000

Starboard
This A-class starts on Central docks, so be careful not to lose your bike in the water. Aside from that, there’s a section going through a shopping mall and some jumps. It ends in relative ease on the freeways where you have plenty of space.
Reward: $25,000

Alley Press
In my opinion the toughest bike race, this A-rank is a circuit around North Point. The beginning is the hardest, starting in narrow alleys where pileups occur frequently. Try to take the lead early, or hang back and wait to zoom past the inevitable crashes.
Reward: $25,000

Early Grave
The last A-class race starts in a graveyard in Kennedy Town and ends at the docks. A pretty straightforward level, you should have no problem with it after Alley Press.
Reward: $25,000