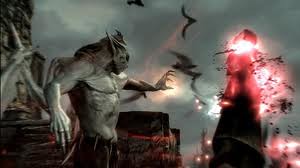 Oblivion gates were the signature features of The Elder Scrolls: Oblivion, and for Skyrim it is the wide variety of Dragons that you find, most of them hostile, while a handful being helpful and wise.

Being a Dragonborn, even the mightiest of the dragons know not to mess with the likes of you, but what of the new Legendary Dragons? Does the Dragonborn have the guts to take him on?

The Legendary Dragon type is an all-new Dragon variant in the Dawnguard expansion for Skyrim with black and golden skin, and though they mostly behave like other dragons (you know, the flying, the attacking, and the dragonbone-dropping), they have considerably more health, more powerful attacks, and are much, much rarer than any of the other Dragons – even more than the Ancient Dragons.

Alongside large amounts of health and rarity, Legendary Dragons breathe both Fire and Frost, and also use the Drain Vitality Shout.

For encountering a Legendary Dragon, ensure that your character is at least above level 50, otherwise this dragon type won’t appear.

However, even above level 50 there is not guaranteed location of its occurrence; the Legendary Dragon appears randomly.

Considering very little difference to other dragons, its immense rarity, and large level demand, one wonders why anyone would care to fight the creatures. Well, the answer lies in the Achievements list. Yup, there’s an Achievement for defeating the Legendary Dragon, and also a reward of a whopping 40 Gamerscore.

A good way to actually increase the chance of encountering a Legendary Dragon is to fast travel repeatedly between cities till one spawns, provided you have the level and the patience.

Defeating the dragon is similar to the rest – it’s best to concentrate on ranged weaponry (provided you have awesome aim) and the dragon-crippling, human-made shout that works oh-so-well to bring them to your level. After that, it’s a matter of correctly using shouts and dealing some awesome damage.

Do note, however, that the Legendary Dragon will take a considerably larger amount of time defeating that other enemies you’ll find.