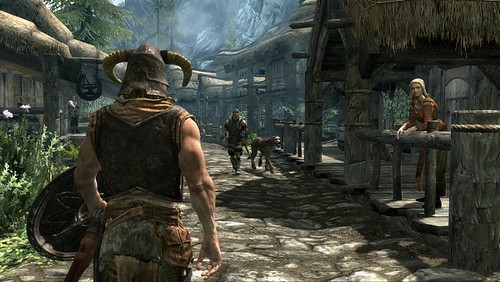 There are still a good six months till the scheduled release date of Skyrim, and Bethesda has been periodically providing new information about the game to intensify the urge to play this game.

Out of the many elements that make Skyrim oh-so-delicious, we decided to elaborate more of these, just to titillate our impatient nerves even more.

We won’t be seeing an addition or subtraction to the selectable races in Skyrim. That means there will be ten races in the game. Unlike in Oblivion, and much like in Morrowind, Skyrim is a place which does have a bit of racism in it. For example, Elves or Mer won’t easily earn the trust of the inhabitants of Skyrim, because the place is the home of the Nords, who believe that Tamriel should be ruled by Nords only.

We’ve already mentioned there will be around 120 different dungeons in Skyrim and around a 100 or more Points of Interests. Among these points of interests will be encounters with the Nine Divines and the Daedra, some of whom will offer side quests.

Nearly half of those dungeons will be relatively short – round about 15 minutes or so, whereas the larger ones will take around two or three hours to complete. Regardless of the length of the dungeon, there will be a sense of accomplishment after finishing one; with larger dungeons having greater and more satisfying rewards.

There will be a large variation in the creatures in Skyrim. Giant spiders, wolves, beasts, elks, deers, giants, mammoths, dragons and fuzzy little rabbits; Skyim has them all. Difference lies in which situation each creature is found.

Different creatures will depict different preferences in habitat; for example, mammoths will be found near giants, and giants will have their own preferred environment which they live in. Furthermore, certain other creatures will prefer dungeons and caves, while others will prefer the icy peaks of Skyrim.

The alchemy skill was long considered tedious by many players. Thankfully, it has been given a revision, and will work differently from Oblivion. Crafting skills and cooking will be presented in the form of menus, which will be streamlined for the ease of the players. Additionally, traps will play a much larger role in the game than they did in previous Elder Scrolls games.

NPCs will be more involved in the dynamism of the world. They won’t look like elements just used to decorate or populate the cities and towns; they will have a sense of personality and objectivity in them.

The new Radiant AI technology will provide with a much better AI experience and NPCs will be busy in regular mundane tasks such as cooking, working on leather, blacksmithing etcetera, unless disturbed. Additionally, even the smallest decision a player makes will indirectly or directly affect NPCs nearby or far away.

I can’t think of anyone who knows about The Elder Scrolls games and is not excited about Skyrim. A quick reminder that the game is scheduled to be released on 11th November, 2011 (11/11/11).