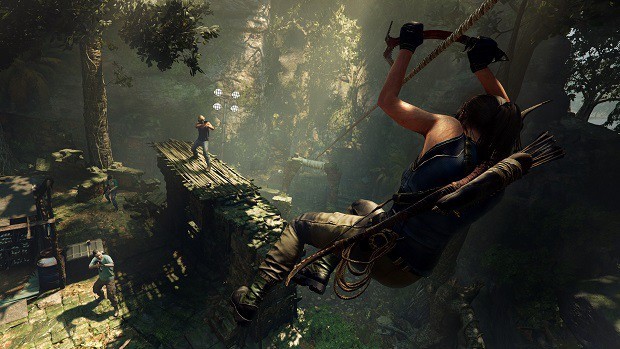 Porvenir Oil Fields is not a large chapter but it does have a few places which can confuse even the veteran player of the series occasionally and our Shadow of the Tomb Raider Porvenir Oil Fields Walkthrough Guide will ensure that it does not happen for long.

There is only one objective that you need to complete throughout this level and this to find Jonah. This will not be easy as you will need to go through a lot of different enemies to get to him and will have to kill a lot of Trinity soldiers in your path.

Let’s go ahead and see the easiest way to complete this chapter as well as find all the Documents, Relics, and Murals in the area.

2 guys move around while the other 2 stand on the side. Use the bushes and the mud to eliminate the soldiers who are moving before picking up the Mason Jar on the crates to get their attention and then taking them out.

After that, you will climb the ledge and move right to take out a few enemies. Then move across the water and take out the moving soldier before eliminating his partner.

If they do not move towards you and rather move to the group of soldiers, then toss a bottle from the rock to get their attention and take them out one by one.

The Beach Base Camp

You will now need to move further inland by climbing the waterfall and following the objective markers to the cliff.

Leap and use the Grapple Axe to get to the next ledge before climbing and then moving to the right to get onto the plateau. Here, you will enter the Beach Base Camp where you can increase skills and rest up.

The best skills to prioritize are melee and stealth since they are going to be used more often. You can also find 2 Documents here. One inside the camp and one in the rope line which leads up to the camp.

The next 2 soldiers have Thermal Goggles so you need to prioritize them. Make sure they do not scan vegetation that you are in or use the walls as cover.

There are 2 more soldiers with them which you can take out by using a distraction around them. Once you have taken out the enemies with the goggles, you can also use the vegetation to your advantage.

Going through the gate will lead to another group of enemies. They also have Thermal Goggles but you can use the mud to negate their thermal vision.

Now, all you need to do is to wait for the right time and take out the enemies one by one. After that, use the generator on the left side to have the enemies investigate it and then take them out one by one.

Continue onwards to the next path and wait for the next Thermal Goggled soldier to move before killing his comrade. After that, take out the soldier with the Thermal Goggles when he returns.

Put them together near the wall and then take out the remaining two enemies using the good old bottle on the crate as a distraction and separating them.

Continue on the checkpoints and leap to the craggy wall before rappelling down and learning the recipe for Fear Arrows.

These arrows can be crafted if you have Dart Poison, Cloth, and Silent Arrows. These arrows make the enemy randomly fire his weapon with fear and take out other enemies nearby.

Eventually, the enemy infected by the Fear Arrow also dies. Try to focus on enemies with Assault Rifles to wreak maximum havoc.

After you have found the arrow, go to the cave which has a large shrine. The shrine will have a Mural behind it which you can find before you continue on the main story path.

Once you have found the Mural, remember that there is a Document close by. There is no need to tell you how to find it since it should be quite obvious.

Once you have found it, continue on the main story path and take out the enemies ahead. The guy in the middle will be the best target for your fear arrow before you move on with your quest before taking out more enemies.

Now that you have the Fear Arrows at your disposal, you can easily take out groups of enemies using the aforementioned technique.

However, stealth is still the best option as there are mud patches nearby you which you can use to get up close and distract them one by one to finish them off.

Once you have taken out all of the enemies in the first group, you can do the same with the second group as well. Prioritize the guy with the Thermal Goggles first and then take out the remaining guys whichever way you want.

Remember that it is possible to exit the area without engaging in battle again but you cannot exit the area if you are still in combat. So, decide your approach and stick to it before moving forward.

Now, you will be coming up to the Destroyed Bridge Base Camp. Here, you can find a Relic near the campfire. You can also find a Document near a flaming pipe right before you get to the base camp.

Soon, you will come upon an oil refinery and will need to run away from the helicopter. Spring as much as you can and go from one obstacle to the next.

Make sure you do not stop or you are dead. Use the walkway and your Grapple Axe to get to the ledge before scrambling up the tower and then shimmying onto the pipe.

Use the Tightrope to get to the next walkway and get to the tower before jumping on the path that should be quite obvious to you now. Climb up to the top to successfully evade all enemies.

Now, you will have an assault rifle and will have to fight 7 different Trinity soldiers. Make use of the explosive barrels and tanks. Take them out using them and remember to push forward using natural cover as much as you can.

Advance to the tank and go deeper into the refinery. When the helicopter joins in, simply seek cover more actively and keep on using the barrels to take out enemies.