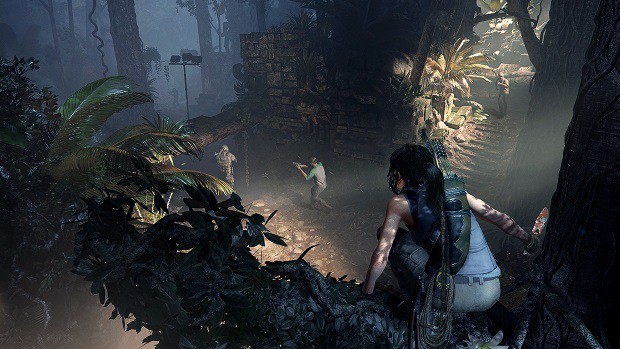 San Juan may not be that big of an area but it is still quite complicated as it has you going through numerous different trials and fights. Do not fret though, as our Shadow of the Tomb Raider Mission San Juan Walkthrough will guide you through it all.

In Church of San Juan, you only have 2 main objectives as you course through the area.

One of them is to find the Silver Box and the other one is to defeat all of the Trinity Soldiers in the area. Let us go ahead and see how you should do that.

After investigating the 2 Murals hidden behind them, interact with the Mural to the right of the stairs on the ground floor, and then find the far wall to get another Mural which has a secret.

Stations of the Cross

The stations can be found by following Jonah around. Pull the cart backward to find the second one and interact with him at the statue to find the third one.

All you have to do is to pick the right station and interact with it. Specifically, you need to reflect the light upon the mirror which contains a woman holding up a cloth to Jesus.

When you enter the final part of the puzzle, all you have to do is to move the mirror in the left in such a way that it lights up the middle option and then interact with it.

Get to the other side then and move the light to the far left option. Interacting with it will display a cut scene where you find the box of Ix Chel and then the entire place breaks down.

Swim safely to outside then and you will find that Amaru has captured Jonah. There will be a cutscene then.

You will be running into some enemies. Use the good old distraction method to separate them from one another and take them out one by one.

After taking out the first group, move forward and you will run into another group of soldiers. Take one of them out when they separate using stealth and then kill the other one using a bottle to draw his attention.

The primary method of killing these enemies is the same. Use distraction and stealth to take them all out one by one.

The group of 8 soldiers that you come against soon after the aforementioned section has the same characteristics and all you need is to separate them from one another, which should be obvious by now.

The final battle does not require stealth, as you will be using your weapons. Take out the soldier with the shotgun first using the explosive barrels and all the explosives that you have at your disposal.

After that, take out all of the enemies to end this area, go ahead and a cut scene will be triggered.

There will be a huge chase scene and you will need to run from the flood coming from above and you will end up riding in a boat with Jonah heading back to Paititi.