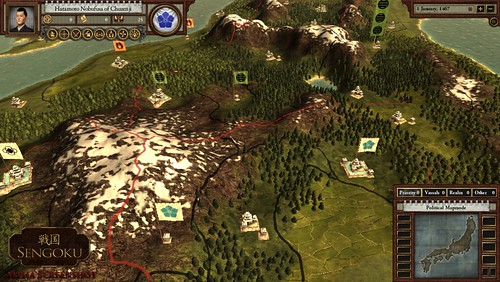 At a first glance Sengoku might seem like Shogun 2: Total War due to using the same setting and world map and thematically, you’d be right. However, the similarities are superficial and it’s in the mechanics that the game differentiates itself from the competition.

Shogun 2 is primarily a turn based game whilst Sengoku is a game which plays in real time but you can vary the progression of time or pause it (using the interface or the space key).

In addition to this, the game makes a bigger deal of indirectly managing parts of your empire through vassals and also has a system for agreeing to enter into plots against your enemies.

There is also an honour system in which special actions will use up honour points (especially if you get discovered doing something dishonorable).

If your honour drops below zero your character commits Seppuku, but know that you can continue to control your empire via your sons and daughters (who can force your current leader to commit Seppuku thereby restoring some honour to the next leader). 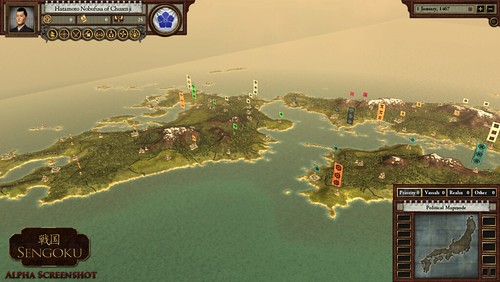 The game has an emphasis on characters with ratings in areas such as diplomacy and martial (warfare) with special traits that are sometimes good, mixed or bad such as the ‘inbred’ trait.

You will still find yourself embarking on construction projects but not research. There does seem to be less control and notably less clarity of control over the raising and composition of armies – You don’t specifically choose whether you want a primarily mounted army or bow wielding (etc) and it’s difficult to be sure how many troops you’re going to get by raising a levy/army until you’ve done it and this is an area I am a little concerned about.

If you’re interested in playing a game that gives you a different approach to the wars of feudal Japan, then this just might be for you!