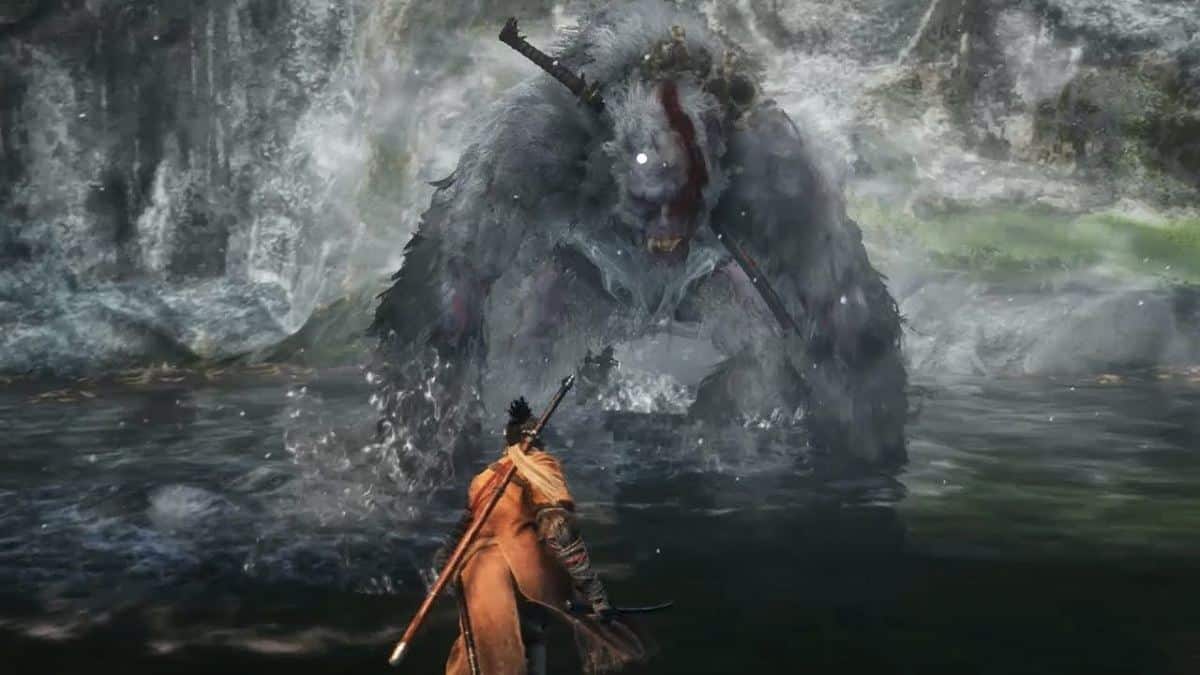 Prepare to face a white King Kong because he will make your life miserable. There are two phases to deal with in Sekiro Guardian Ape fight and both of them are equally challenging. Guardian Ape in both the phases is super agile and his combos carry over across the map.

Additionally, to make matters worse, both phases have completely different movesets so you have to memorize movesets for both the phases. Luckily, there is not too much variety in both phases. Guardian Ape repeats 2-3 attacks and occasionally throw in an unblockable so it is not too much to worry about.

Jump down in the pond where you will find Guardian Ape taking a bath. Unfortunately, since there is no way to perform a Stealth Deathblow on him, the beast will spot you from a mile away when you are getting closer.

For interrupting his bath, you will be severely punished. However, this Guardian Ape Boss Guide will help you avoid that. Additionally, in the area, you will notice there were many trees to grapple on. My suggestion during the first phase is to never use them.

Starting with Phase 1 where you have to mainly rely on the Firecracker Prosthetic Tool. For most of the part, you have to block his melee moves. When he is done with his combos, you can pop a Firecracker on him to stun him.

While stunned, you can get in a few hits on him. Additionally, while it is not advised too much, you can try to get a hit or two in the openings after the boss is done with his attack. However, this is a risky maneuver since the boss hits like a truck.

I suggest this because you cannot spam the firecrackers all the time, there is a certain cooldown on when he gets stunned by the Firecracker, typically about 30 seconds so in the meanwhile, get some hits in by other means.

Another good thing about the fight is that during Phase 1, the boss gets stunned automatically when 25% of his health depletes. Therefore, he will be stunned three times during the fight when his health drops to 75%, 50%, and 25%. When stunned, you can get quite a few hits on him.

Work on him with the strategy above, but watch out for the unblockable moves. Initially, he will be using an Unblockable Grab where he sweeps his hand across the floor in front of him. To avoid it, simply jump backward.

Jumping is more effective at dodging this move. At a later part of the phase, when his health is considerably drained, he will use another unblockable move where he jumps in the air. To avoid this, either jump away or just run away. Although it can be difficult to run away when you are locked onto the Ape that is why jumping away might be a better choice.

The last attack you have to watch out for is his filthy fart combo where he farts, then instantly jumps, and throws his shit at you. He does this after the combos that leave him back turned against you. He baits you to attack his back and just as you pop a few hits, he will catch you with his fart.

Avoiding the fart is not too difficult but avoiding the shit is damn near impossible! After farting, he dashes forward and jumps, turning his body around, midair, and throwing shit at you with near-perfect accuracy. This shit tracks you in the air too so the only way to deal with this is to push forward with him when he dashes so that when he is in the air, you are right below him.

Moving on to the second phase, usually, people consider this a more difficult phase but it is much easier. The main technique here is to keep a moderate distance between yourself and the Guardian Ape. While at that position, you can avoid quite a few moves.

Starting with his favorite screaming move. Do not know how he screams without a head, but when he does, it causes Terror Build up on you and when the Terror Meter is fully filled you instantly die so it is very important to keep an eye out for it. At a moderate distance away from the Guardian Ape, the full body of the boss is visible so when he attempts to scream, the animation is clearly visible.

Furthermore, you will have to avoid it by only a few jumps backward since you are already far away from him.

He also jumps and lands on the floor with his chest on the ground and performs a slash which we avoided in the same manner – just by jumping backward.

Firecrackers do not affect Guardian Ape during the second phase. Therefore, the main approach to deal damage to him is to wait for his combos where he slashes away quite a few hits. At the end of the combo, he will perform an overhead hit.

It is crucial that you deflect that slash. The final slash is not very difficult to deflect, as it comes out super slow. Identifying the slash is also very easy since before performing that slash, Guardian Ape raises the sword over his head and the camera zooms out. The unique zooming out the animation of the camera gives away the move.

When you deflect the move, the boss drops down stunned and you can deal damage. However, it might be some time when the boss performs this move so until then, just keep a distance and hop around, waiting for the combo. This battle does require patience, but to speed things up, you can attempt to deflect each hit of his combo since they are slow and fill his Posture Meter up rapidly.

We hope our Sekiro Guardian Ape Boss Fight Guide helped you. If there is anything else that you would like to add, be sure to let us know!