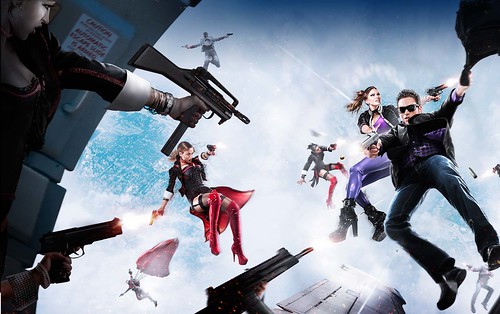 Saints have arrived and they are ready to rock Steel Port in Saints Row: The Third. If you are experiencing any technical difficulties in causing mayhem in the city, you should refer to the Saints Row The Third Crashes and Performance Fixes below to resolve the conflict and continue your mission.

1# Saints Row The Third Crash After 100% Loading
If your Steam is installed to any drive other than ‘C’ on a multiple hard drive setup – You will encounter this crash and fix is to either move the installation to your C drive or copy ‘Saints Row: The Third Initiation Station’ folder from ‘Steam\steamapps\common’ to your C drive (Simply put it on your desktop. Run InitiationStation.exe from the desktop and problem should resolve – game should load fine.

3# Sound Stuttering
Set your audio quality to 41Hz – You can do that by going into PlayBack Devices > Speakers > Advanced and choose it from the drop down menu. Or set the sound to stereo quality in your Audio Control Manager.

4# Initiation Station Messed Up Textures and Character Skins
Go to your NVIDIA Control Panel and change Anisotropic filtering to “Application-controlled”. If you are forcing any other graphics setting using Nvidia or Catalyst Control Panel, set them to default application control as well.

5# Saints Row: The Third Freezes
If you have a Quad Core processor – Open up task manager and click the Saints Row The Third executable. Now set the affinity to use only cores 0 and 1 or simply run the game in two cores to resolve the random freezes and crashes.

7# Saints Row: The Third ATI/AMD Performance Fix
If you are experiencing performance issues running the game with AMD cards – Use 11.10 drivers and when new drivers are release (Expected in few days) switch to those, since they will most probably be optimized to run Saints Row The Third.

Nvidia users can download the latest beta driver to fix any performance issues they are facing.

8# Saints Row: The Third Low Frame Rates (FPS Fix)
You can tweak the graphics variables in the ini configuration file below to squeeze all performance from your machine.

10# Game Doesn’t Save
It does save when Mission Complete message pops-up. Other than that, your character status and check points get saved regularly but when you quit prematurely, you will start from the mission save.

12# Low Sound When Playing The Game
You most probably have a micro-phone plugged-in and Windows is reducing the sound volume by 80%. You can change by going to System Settings > Sound > Communication.

13# Black Screen With Music in The Background
Tweak this ini configuration file to use your native desktop resolution and refresh rate.

15# How To Make Saints Row: The Third Full Screen
If your game loads in Windowed mode, you can select Full Screen under Video Options to make it load in full screen, next time you launch the game.

16# Out of Sync Cut-Scenes
Possibly a driver issue – Update your video card drivers to the recommended drivers in the article above.

If you face any other issue, let us know in comments, and we will try to help you out.