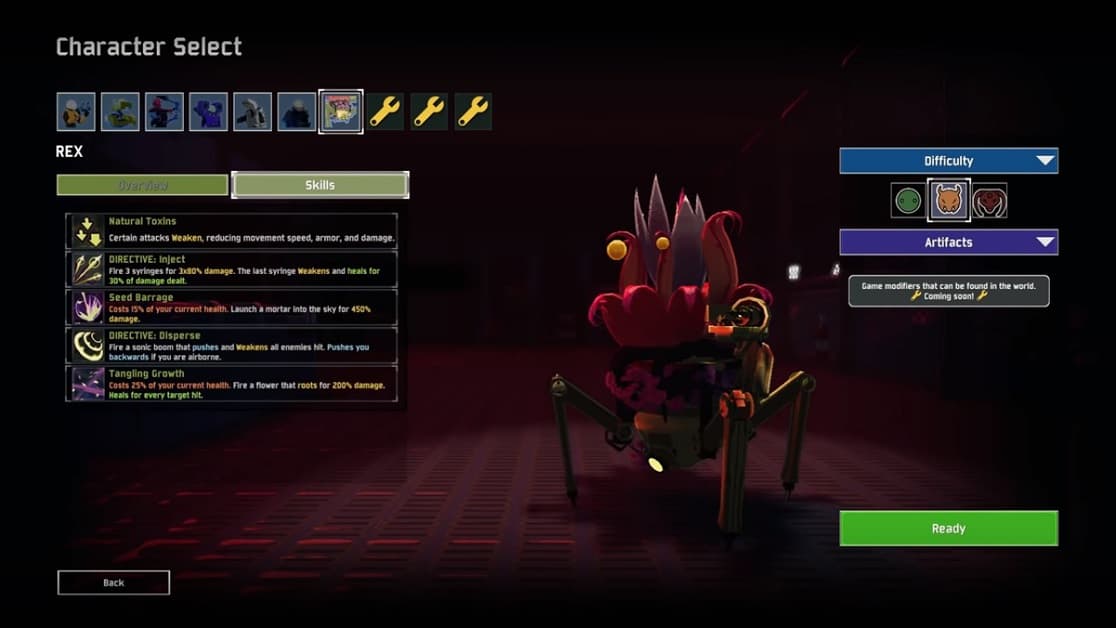 To help you understand Rex’s abilities and mechanics in Risk of Rain 2 so you can play him properly, we’ve prepared these Risk of Rain 2 Rex builds and loadouts to walk you through all the information you need to know about him.

Rex, the plant-robot hybrid, has improved quite a lot in RoR 2 and has gone from being subpar to a very useful in the game.

Rex has several unique abilities and mechanics which set him apart from the rest of the characters in the game, which is why it’s important to have Rex on your roster.

How to Unlock Rex
Right at the start of the game, walk around to the backend of the escape pod and press the use key to interact with it.

This will open up a hidden compartment in the pod which contains some equipment that is needed to unlock Rex.

One important thing to keep in mind is that if your health drops below 50% while you have this equipment on you, it will actually kill you. So, remember to keep your health in check.

Now that you have the equipment, make your way to Stage 4 (the Abyssal Depths) and head up to the second-highest platform.

You’ll see Rex sitting on this platform. All you need to do is to interact with Rex to unlock him.

Do note that this cannot be done with MUL-T as he has a different drop pod from everyone else.

What Makes Rex Great
The main thing which sets Rex apart from the rest of the characters in Risk of Rain 2 is the fact that he can heal himself and also apply debuffs to his opponents.

When you hit an enemy using Rex’s primary attack, Rex will gain HP equivalent to the damage to dealt to the enemy.

This attack will also weaken the enemy’s armor, allowing you and your teammates to deal more damage to them.

This healing does come at a cost though. To compensate for his continuous healing, Rex’s other abilities will chip off some of his health when they are used.

This means that you’ll have to be careful with the use of your abilities. Another thing to be wary of is that One-Shot Protection does not work on him if his health drops below 90%.

If you’re playing the Monsoon difficulty, then Rex is a great character to use. This is because there is practically no way to restore your HP in this difficulty, so Rex’s healing abilities come in extremely handy.

Furthermore, because of Rex’s armor reduction, your entire team will be able to dish out more damage to the enemies.

Because of this armor reduction, Rex has the greatest early-game DPS out of all the characters in RoR 2. This makes Rex a very good choice for a support character.

Despite the fact that this is a passive, it does not seem to work with all of Rex’s abilities.

This ability serves as Rex’s primary way to restore HP and to Weaken the enemy. The three syringes fired by this ability do 80% damage each, but they have a 0.5 proc coefficient. Meaning, it has a 150% chance to proc.

This attack is a bit difficult to land as the syringes aren’t fired instantly and they travel relatively slow; so if the enemy is far away, there’s a high chance you will miss.

Seed Barrage deals a ton of burst damage and has a tiny 0.5s cooldown (making it spam-able), but it costs 15% of your health per use. Drill on the other hand has a six-second cooldown but it does not use up any of Rex’s health.

This is an easy choice as Bramble is basically just an upgraded version of Disperse. Disperse is a very bad utility so there’s no reason for you to not equip Bramble Valley.

Special Ability – Tangling Growth
Costs 25% of your current health. Fire a flower that roots for 200% damage. Heals for every target hit.

What makes this AoE ability really powerful is that it grabs the targets, pulls them towards the middle and keeps them there.

This enables Rex to easily use his other abilities on the targets to deal more damage.

Best Way to Use Rex’s Abilities
The following rotation will allow you to use Rex’s abilities in the most efficient way you can.

Start off by using your Tangling Growth at the targets. Then, Weaken as many of them as you can using Bramble Volley.

As you’re healing, spam Seed Barrage on the targets and periodically use Directive Inject to heal up quickly and to Weaken the enemies even more.

Best Items to Use with Rex

N’kuhana’s Opinion: The damage dealt by this ability scales with Rex’s healing.

Ukulele: Increases the proc chance of the Primary Ability.

Primordial Cube: Groups up the enemies, which helps you use Tangling Growth properly.

Razorwire: Can be procced by yourself.

Worst Items to Use

The following abilities should NEVER be used with Rex. They practically make him useless.

Brittle Crown: If you deal damage to yourself, this ability gets rid of all of your money.

Transcendence and Wake of Vultures: Instead of gaining health, these abilities make you gain shields. Rex cannot heal his shields.

Tech Savy Build
If you want to play with a more equipment-oriented build then first thing we recommend is getting the Soulbound Catalyst.

The Fuel Cell is another item that is ideal for an equipment-oriented build since cell it gives reduces the cooldown on activatable items by 15%.

Agile Build
One issue with Rex is that this character is slow. If you want to speed him up a bit then you can make use of a few items. Paul’s Goat Hoof will give Rex a speed boost.

You can also take an Energy drink to help with this.

Now you need to improve your mobility so get the H3AD-5T v2. We recommend getting this because it will get rid of fall damage and allow you to stay aerial for much longer.

When you slam down, you will deal a ton of damage to enemies in a 5 meter radius