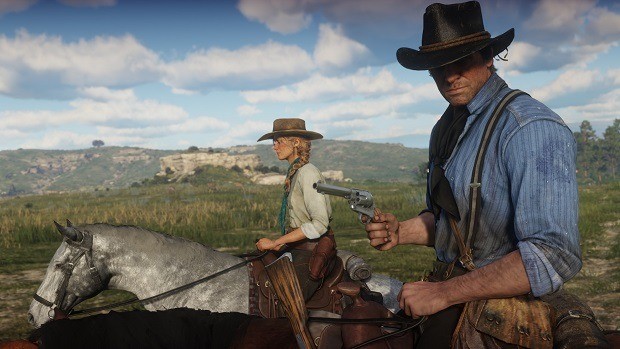 As you can see the game is using a mouse cursor confirming that it is a PC version of RDR2. Not only that, the video also reveals Graphics settings for Red Dead Redemption 2 PC like anti-aliasing, v-sync, texture quality and more.

This video, more or less, confirms that Rockstar Games is already working on the PC version Red Dead Redemption 2. However, until the game is officially announced, take it with a grain of salt.

It seems that Rockstar Games is replicating the GTA 5 development cycle for Red Dead Redemption 2. GTA 5 originally launched for Xbox 360 and PS3. Eventually, the game was released on PS4 and Xbox One with enhanced visuals and a first-person perspective. Following that, GTA 5 was released on PC.

This leaked Red Dead Redemption 2 PC gameplay suggests that the studio is now working on the PC version of the game. Also, it’s going to be interesting what visual enhancements the PC version will bring since the console version is already a technical marvel.

Aside from the RDR2 PC version, there are hints suggesting that Rockstar is also working on Red Dead Redemption remake. The hint for the remake comes from a glitch in RDR2.

If the report is to be believed then the studio might release Red Dead Remake alongside Red Dead Redemption 2 PC version.

Speaking of the game, Red Dead Online is currently in beta on PS4 and Xbox One. Despite that, the devs have enabled microtransactions in the game. What’s interesting is that you need to pay $600 to unlock everything in Red Dead Online.

Red Dead Redemption 2 is an open-world action adventure game developed by Rockstar Games. The game is available for PS4 and Xbox One.