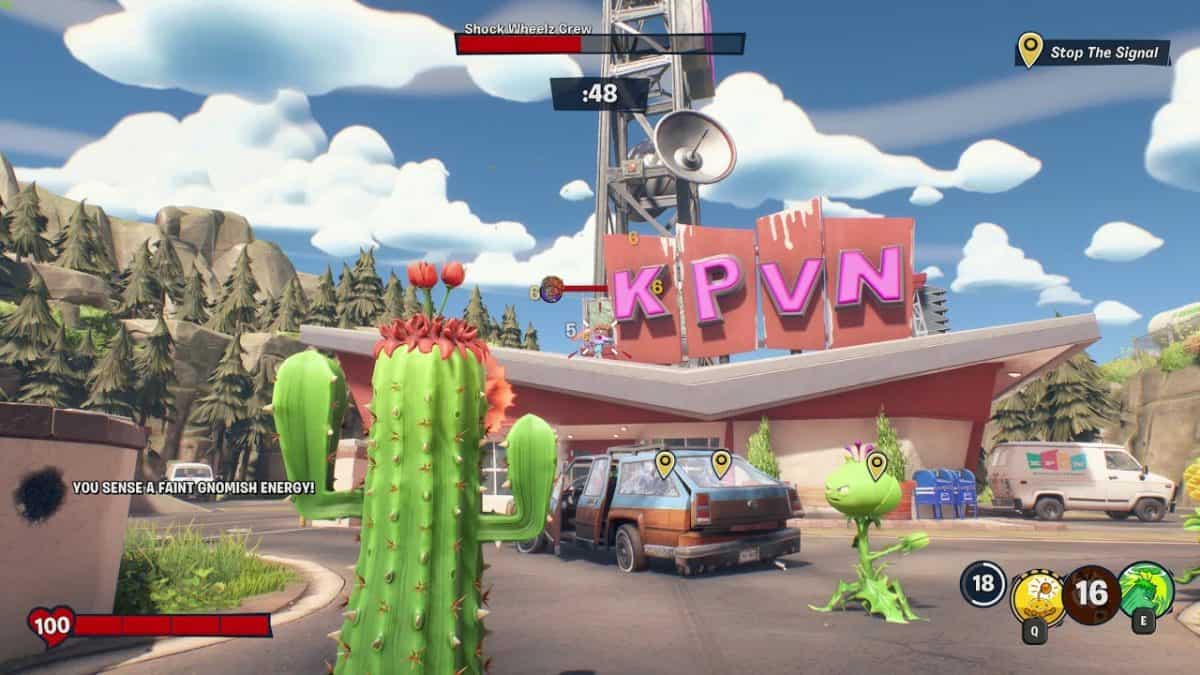 One of the key side activities available to players in Plants vs Zombies Battle for Neighborville is the task of hunting down certain characters who have a hefty bounty placed on them. There are several bounties spread across the Town Center, all difficult and challenging in their own right. This guide will explain how to complete the Bounty Hunts and what exactly you’ll gain for doing so.

These bounty hunts are all essentially boss fights, so be sure you’re leveled up and have the proper character equipped before jumping into the fray. To start the fight, go to the specific location and look for a glowing, golden box and open it. This will make the character spawn into the area and the scuffle begins! You will have to complete the battle in a set time limit, therefore you have to be on the offensive at all times; no time to dawdle.

Captain Featherbrainz
This bounty can be located near Pressure Pier, near the beached ship. A relatively simple fight that can ultimately work against you if you’re not mindful of all the various aspects. Firstly, Captain Featherbrainz himself will be shooting at you, and once you’ve dealt enough damage, he’ll retreat into his colorful barrel; while inside, you cannot hurt him.

Meanwhile, birds from above will start attacking, simultaneously 1 or 2 All-Stars may weigh in as well. You must defeat all the birds and All-Stars before Captain Featherbrainz will leave the safety of his barrel. Captain Featherbrainz has no other attack outside of shooting you with his pistol, so remain mobile and it’s unlikely he’ll hit you. He’ll retreat into his barrel again and the whole process starts all over again.

Beating Captain Featherbrainz will earn you the following:

Byte Knight
Go to Uno Taco, close to the Museum. Head to the roof of Uno Taco and cross the plank to the roof of the other building; the chest that activates the hunt is there.

As soon as the fight begins you’ll notice that Byte Knight is impervious to all damage (indicated by his rainbow-colored exterior). The only way to damage him is to locate a ring of light somewhere nearby.

Only within the ring does Byte Knight become susceptible to any sort of attack. However, Byte Knight excels at close range combat, so be very careful; try to maintain enough distance to remain within the ring and not give him too much room to attack. He can use some long-ranged attacks, so be wary of those.

The ring will actually move around, so be mindful of your surroundings and quickly move from one area to the other when the ring changes positions. You must lure him to the ring, and also keep a close eye for any grunts in the area, they make the fight more difficult than it has to be.

You will get the following rewards for completing this bounty:

They are located behind the KPVN Tower. When the battle commences, a group of TV-Heads will take the stage. They will all be impervious to damage, and you must wait for their invulnerability to wear off. Once it’s gone, destroy all TV-Heads, this will spawn in the actual Shock Wheelz Crew.

The Crew will try to blast you will beams of electricity, so be sure to dodge and get away from them when it seems they’re about to attack. However, try to stay on the offensive as much as possible as they’ll leave the scene and more TV-Heads will spawn; you will have to repeat the process to spawn in the actual Crew and damage them as much as you can while they’re present.

This is especially difficult to do if you’re playing solo as the whole process is very time-consuming, time is not a luxury you can afford to waste. However, if you manage to complete it, you will be rewarded the following:

Can be found near the log cabins, by the lake (Weirding Woods). Queenigma is never truly impervious to damage like the Hunts preceding her. However, when she’s performing her special attack, she takes less damage than what she otherwise would. While performing her special attack, she will move swiftly to and fro, emitting a noxious, purple gas; this gas will completely obstruct and warp your vision, making you practically blind for a short period of time.

Many grunts will attack you in that time period, so keep moving, alternatively, you can attack in all directions with the explicit purpose of taking out enemies. Once she’s performed her special attack, do as much damage as possible. A relatively easy boss fight, just make sure not to that you aren’t facing overwhelming odds when blinded.

Solar Sisters
Close to Camp Near-a-Lake. This may prove to be one of the more difficult fights. The Solar Sisters are a set of flowery siblings that fire relatively weak shots at you. It’s not their offensive capabilities that prove to be the greatest challenge, it’s the fact that they can heal one another and keep the battle going for long enough that you run out of time.

The best way to approach this fight is to not kill any of the sisters. Instead, lower the health of each sister down to the point where only a few additional attacks will beat them. They only begin healing one another (or themselves) when they’ve completely been depleted of their HP. Bring the HP of each sister down to as little as you can and kill them all in quick succession, preventing them from healing one another.

Wild Bunch
South of Z-Tech Factory. This is a relatively simple battle with just a single caveat: Don’t touch the Squash. When the battle starts, a group of malicious flowers will erupt from the ground and begin firing at you. None of the flowers are of much threat, you can beat them easily.

However, what is a problem is the giant, green squash that is following you around. Touching or being touched by the squash will immediately end the Hunt as the squash explodes and instantly kills you. Run around the area, maintaining a safe distance from the squash and killing all enemies. Once the enemies have been killed, the bounty hunt is complete and you earn the following rewards:

Tiny
West in Mount Steep. A zombie much larger than your average undead, this creature is accompanied by two Champions and wields what can be described as a minigun. As long as the two Champions are around, Tiny is impervious to all damage. Therefore, you must beat the two Champions and then turn your attention to Tiny. Try to keep your distance and be mindful of his minigun – it packs a punch!

The Champions will regain their HP and Tiny will once more be invincible. Repeat the cycle until the enemy is down for the count. Finishing this bounty hunt rewards:

Bomby Dearest
In front of the Olde Cheese Factory. Get ready for a bullet storm, because that’s pretty much what this whole fight is. The actual bounty is only on the head of a large zombie (with a smaller zombie strapped on its back) carrying a bomb; do not get too close to him unless you want to get caught up in an explosion. Bomby won’t really do much outside of slowly walk towards wherever you are.

The real challenge comes from all the support he gets from various champions and TV-Heads. You need to alternate between firing and killing all extraneous enemies and shooting Bomby and diminishing his HP.

Ninjimp
In the Steep Mines, north of the map. Arguably the trickiest Hunt out of all of ‘em. The boss itself is not too much of a problem; it’s a tiny ninja – agile and swift – accompanied by two copycats.

All 3 will simultaneously attack you, however killing the copycats is incredibly easy… and that’s exactly why this is a tricky fight. Killing the copycats results in you failing the hunt. You cannot, under any circumstance, kill them.

The way to go about it is to test the waters and use your weakest attack and figure out which one of them is the real Ninjimp. It usually takes a few hits to kill the copycat, so 1 hit won’t kill it but it will reveal whether it is or isn’t a fake. You’ll be able to figure it out by looking at their health bar; if one shot greatly reduces their overall health, then it’s not the real Ninjimp. Focus fire on the actual Ninjimp and keep attacking him and him alone until it goes down.