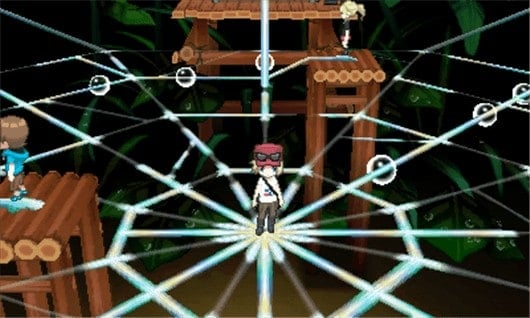 Like its predecessors, Pokemon X and Y have multiple numbers of gyms. The latest installments features eight different gyms spread across Kalos Region.

Each gym in the game has its very own leader and utilizes a certain type of Pokemon. Besides this, each gym also has a bunch of trainers which players need to encounter before heading towards the final battle.

This gym comprises of Bug-Type Pokemon and its leader is Viola.

In order to get to the gym, you will have to jump down to get on a think spider web. You will encounter different gym trainers along the path who will challenge you for a battle. The first trainer that you will encounter will be Youngster David.

Ladyba
Youngster David uses Ladyba which is Bug/Flying type Pokemon. It uses Tackle, Supersonic, and Comet Punch against your character. This level 10 battle is fairly easy to complete and you will be moving on towards the next trainer in no time.

Spewpa
Youngster Zachary has Spewpa which is also a level 10 battle. Spewpa is a Grass-Type Pokemon which has the Shed Skin ability. You should expect Tackle, String Shot, Harden, and Protect from this Pokemon.

End this battle quickly to get to the final trainer before facing the gym leader herself.

Lass Charlotte uses two Pokemon against you which are Kakuna (Level 7) and Combee (Level 9).

Kakuna
Kakuna is a Bug/Poison type Pokemon who possess the Shed Skin ability and will use Poison Sting, String Shot, and Harden against you.

Combee
As for Combee, this Bug/Flying type Pokemon has Honey Gather ability at her disposal and has Sweet Scent and Gust as her moves against your character.

After completing these battles, make sure to heal your Pokemon before taking on Voila.

Surskit
Surskit is a Bug/Water type Pokemon which has Water Sport, Quick Attack, and Bubble as her moves. Along with this, it uses Swift Swim which increases its Speed during rainy seasons.

Vivillion
Vivillion is Bug/Flying type Pokemon which has Tackle, Harden, and Infestation moves and uses Compound Eyes or Shield Dust as her abilities.

Note: You will often see Voila using health potion on her Pokemon. Take them out quickly so that she is unable to revive them.

Successfully defeating the gym leader will get you the Bug Badge and TM83 Infestation.