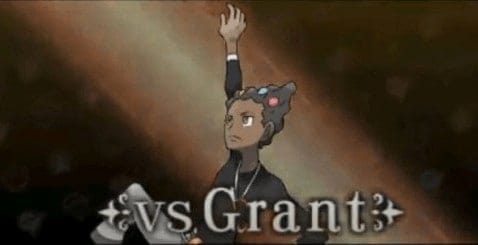 The second gym in Kalos Region is Cyllage City Gym which is led by Grant and only uses Rock-Type Pokemon. Different rocks and sandy paths make up the gym with Grant waiting at the very top. Prior to reaching Grant, there are different gym trainers that you will encounter on your way.

Dwebble
Dwebble is a Level 21 battle which is Bug/Rock Type Pokemon. Dwebble uses Rock Blast and Feint Attack against your character. It also possesses Sturdy ability.

Relicanth
Relicanth is a Water/Rock Type Pokemon which is a Level 23 battle. Along with having Swift Swim ability, this Pokemon is able to use Water Gun, Rock Tomb, and Yawn moves.

This is an optional gym trainer and can be avoided. As for the battle, it uses Roggenrola.

Roggenrola
This Rock-Type Pokemon is a Level 24 battle which utilizes Smack Down, Mud-Slap, and Headbutt against his opponents.

Rising Star Monon has Solrock and Lunatone at its disposal. Some brief attributes of these Pokemon can be found below:

Solrock
Solrock is a Level 22 Pokemon which is both Rock and Psychic Type. It has the Levitate ability and uses Psywave, Rock Throw, and Fire Spin during the battle.

Lunatone
Lunatone is almost identical to Solrock in terms of level, ability, and moves except Hypnosis which it uses instead of Fire Spin.

Defeat this trainer to get to the last trainer of this gym; the only hurdle between you and Grant.

Onix
Onix is a Level 21 Pokemon that has Rock Head ability at his disposal along with Bind, Rock Throw, and Tackle as his moves.

Nosepass
Nosepass is also a Level 21 Pokemon which has Sturdy as its ability and Thunder Wave, Rock Throw, and Tackle as his moves.

Rhyhorn
Rhyhorn is a Ground/Rock Type Pokemon which is at Level 21. In addition to having Lightening Rod as his ability of choice, it has Rock Tomb and Stomp as his moves.

Defeat this trainer and get to the top of the mountain to commence the final battle.

Amaura
Amaura is a Ice/Rock Type Pokemon at Level 25. He uses Aurora Beam, Rock Tomb, Thunder Wave, and Take Down as his moves and Refrigerate as his ability.

The best way to take down this Pokemon is by using Fighting-Type or Steel-Type Pokemon to do the maximum amount of damage.

Tyrunt
Tyrunt is also a Rock/Dragon Type Pokemon with Rock Tomb, Bite, and Stomp. It has Strong Jaw and the best to take him out is either by using Ice- Type, Steel-Type, Dragon-Type, or Fairy-Type moves.

Successfully defeating Grant will award you with Cliff Badge and TM39 Rock Tomb.