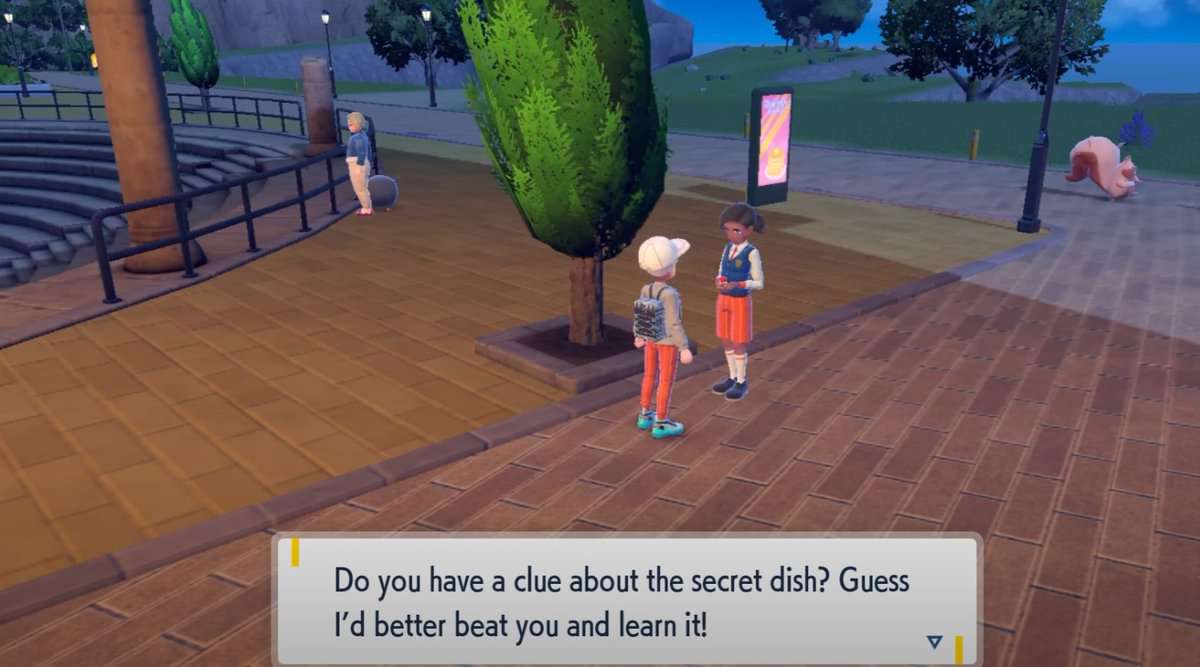 The sixth gym that the players will visit in Pokemon SV is the Medali gym, whose leader will be Larry. The very-average Larry presents a battle that is relatively easier. So, you can relax during this gym battle, and slam him with your Pokemon’s most powerful attacks.

In this guide, we’ll show you to solve the Medali Gym Challenge, and how to defeat Larry in Pokemon SV with ease.

Finding the required clues will take you on a journey all around the place, requiring you to battle with multiple trainers, to get the next clue in the puzzle.

Firstly, players should find a child named Adara near the restaurant and defeat her in battle after which she’ll provide you with the first clue to the puzzle. Adara will tell you to choose the “odd one out” from an ice cream stand. Upon inspection, you’ll discover the odd one out to be grilled rice balls, with lemons on top.

Secondly, you’ll come across a kid named Santiago, who will provide you with another clue, bringing you one step closer to solving this puzzle.

When you’ve successfully defeated his Dunsparce, he’ll tell you to listen closely to the blue bird Pokemon. The blue bird is the Talkabilly which is sitting on the Pilot’s head nearby, which will eventually say “medium”.

The last hint you’ll receive is through a trainer called Gisela, who is located outside the town. Upon defeat, she’ll provide the player with the second clue, asking them to search around a “dark area surrounded by stairs”.

Now, that you have al the clues, put all the pieces together and order the right recipe from the waiter at the restaurant, which will start Larry’s battle.

How to defeat Larry in Pokemon SV

Before heading into battle, it is recommended to make sure that all your Pokemon are at least level 36, since this will help even the odds against Larry’s evolved Pokemon.

Since this is a Normal-type gym, using fighting-type Pokemon against Larry will grant you an upper hand in the battle.

The Pokemon that you’ll have to battle against are Komala (level 36), Dundunsparce (level 35), and Staraptor (level 36). This is why, having a Fighting-type Pokemon, and Steel and Rock-type Pokemon as a backup will create the perfect team that’ll lead you to an easy victory.

The first Pokemon that Larry will bring out is Komala. The moves this normal-type Pokemon can use are Yawn, Sucker Punch and Slam.

Using any fighting-type Pokemon would easily be able to defeat Komala, however, it is possible by the end of the battle your Pokemon might fall asleep due to Komala’s ‘yawn’. Make sure to use an awakening once you’ve moved on to the next Pokemon.

Dundunsparce, the second Pokemon can be defeated in a similar fashion, since it is also a normal-type Pokemon. This Pokemon from Larry’s team will use Drill Run, Glare, and Hyper Drill against you, which are highly effective at dealing damage, so make sure you remember to heal once in the battle.

Once you’ve defeated the second Pokemon, if you have your best Pokemon out for battle, swap it out with your second choice. This is because at the s tart of the battle, Staraptor will terastallize. This means that the damage its attacks will deal will be significantly increased, taking out your Pokemon with one attack.

Terastallize your Pokemon as well, and use your strongest attacks against Staraptor, but be ready to lose this Pokemon mid-battle as well. However, you can use a revive to bring your best Pokemon back, and finish off Staraptor, which by this time already has a significant portion of its health drained.

A few things to remember is to make sure that you consist of your team of Fighting, Steel, and Rock Pokemon since Normal-type Pokemon are weak against them. However, if you have any other type of Pokemon available you can use them as well. But don’t use Grass or Ghost-type Pokemon against them. And lastly, be ready to lose at least one Pokemon during this battle, so choose your Pokemon wisely.

There are several Pokemon that you can use to counter Larry’s Pokemon. Fighting-type would be the best as the are able to deal 2x damage to Normal-types.

Added to that, since normal-type deals ½ the damage to Rock and Steel-type Pokemon, they’re also a preferable choice.

The above Pokemon can be used against Larry, however, any other Pokemon from Fighting, Steel, and Rock-types can be used. Just make sure that they’re above level 36 before you head off into battle.

After the player has successfully defeated Larry and completed the Medali gym in Pokemon SV, they will be rewarded with TM25, and a gym badge. TM25 is a normal-type move, which doubles the damage if your Pokemon is poisoned, burned, or paralyzed. As for the badge, if it’s your fifth, it’ll allow you to control Pokemon up to level 45.