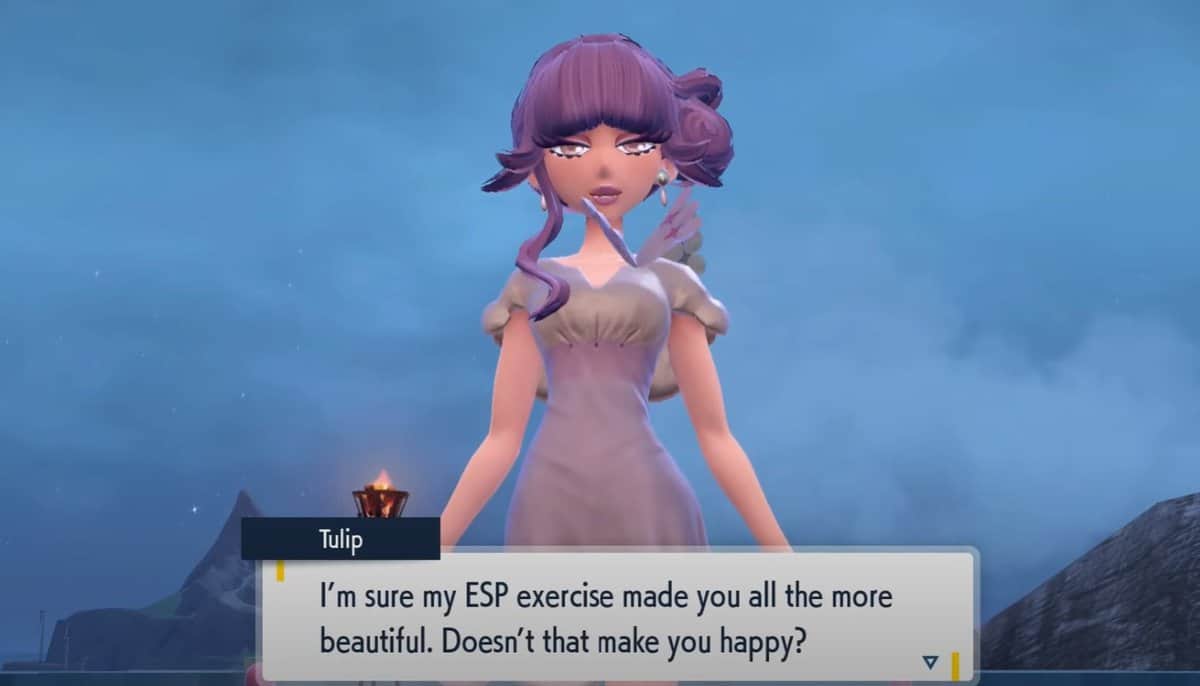 Pokemon Scarlet and Violet allows players to do whatever gym battles they want in their preferred order. However, there is a difficulty curve for every gym battle and if we follow, the Alfornada gym would be the seventh one we face in Pokemon SV.

It houses the second most difficult gym leader in the game. Southwest of the Paldea gym is where you can locate Alfornada. Tulip, the gym leader is a Psychic-type gym leader, and she packs quite a bunch. You must adequately prepare for this battle so here is a guide on how to defeat Tulip, the Alfornada gym leader in Pokemon SV.

The Alfornada gym challenge in Pokemon Scarlet and Violet is simple enough to get through, you have to press buttons to match the emotions of Medicham and Dendra and you are on the clock for this one.

You’ll then battle two trainers the first one will throw out a Level 43 Gothita (Psychic type) and a Level 43 Kirlia (Psychic/Fairy type).

After the second round of ESP training, you fight the second trainer who brings out Level 43 Grumpig (Psychic) and Level 43 Medicham (Fighting/Psychic). You receive a total of 12040P from defeating both trainers.

How to defeat Tulip in Pokemon SV

Tulips team consists of mostly psychic-type Pokemon coupled in with some fairy types. If you’re adequately prepared for each Pokemon she brings out this fight should be a breeze.

The order in which she brings out her Pokemon are:

This is the first Pokemon Tulip fights with. It’s a Normal/Psychic type Pokemon and throughout your fight with Farigiraf she’ll use Crunch to attack with. She’ll also use Reflect which would increase Farigiraf’s defense by a bunch.

Use special attacks during the Reflect phase to avoid the defense and use the Pokemon moves/types: Bug, Ghost and Dark to do double damage to Farigiraf.

Gardevoir is the second Pokemon Tulip brings out. Gardevoir is a Psychic/Fairy type which means it won’t be weak to dark like the rest of the Psychic types and Dark damage will do normal damage. However, you can still use Bug and Ghost-type moves to do double damage.

Dazzling Gleam is a common move Gardevoir will do so pick a Pokemon that is resistant to Fairy type damage. Once you defeat Gardevoir the third Pokemon in Tulip’s Roster will come out.

Despite its similarity in terms of looks to a peacock bird, do not confuse Espathra for a flying type. Espathra is a psychic type and is the third Pokemon in Tulip’s roster.

Espathra is quite tanky so try to use a dark-type Pokemon to get critical hits in. You should be able to beath Espathra relatively easily using a dark type like Zoroark.

Florges is Tulip’s final Pokemon and the most difficult to defeat. If you have a dark type Pokemon you’ll likely have them defeated with one move on Florges part. This attack does 2x damage to dark type and its called Moonblast.

Your best move is to either get a super tanky Pokemon or a fast and high damaging Pokemon that you can use to kill Florges in one hit. Meowscrada is an ideal candidate for the second option. Once you defeat Florges you will have defeated Tulip and the Alfornada Gym.

Tulip has mainly Psychic and Fairy-type Pokemon which makes it easy since you can use basically any Dark/Bug-type to do a ton of damage. Here’s Tulip’s roster in Pokemon Scarlet and Violet:

You can use any Dark/Bug-type or even switch it up with a Ghost type to defeat Tulip. Below you’ll find our suggestions to take out Tulip’s team in Pokemon Scarlet and Violet.

Once you have defeated Tulip’s Pokemon roster you’ll get 8100P and the Alfornada Gym badge. The extra benefit of the gym badge will be that catching level 55+ Pokemon will become easier. You’ll also get TM120 Psychic.