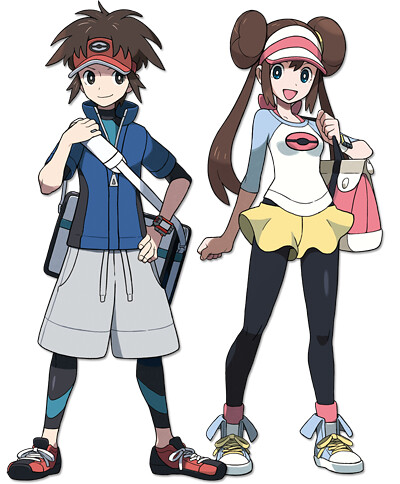 Route 4 (Black 2/ Petilil)
Location. You can trade this one with a guy who is inside a building, Eastern side of the Route 4. You can trade a Cottonee (found in Castelia City’s grassy area) for a Petilil.

Route 4 (White 2)
Location. A man on the Eastern side of the Route 4 will trade his Cottone for a Petilil.

Route 7
Location. A man inside the small house of Route 7 will trade Gigalith for Emolga – which you can find on the route.

Seigaiha City (Tangrowth)
Location. You can trade a Mantine to get a Tangrowth to a guy in Seigaiha City! You can find Mantines at the Undella Bay and Route 21 in dark spots (Spring, Summer, Autumn)

Route 15 (Rotom)
Location. You can trade your Ditto for a Rotom at the small mobile house. Ditto’s are found at Giant Chasm.

These Pokemons are just given to you as a gift, by the certain people when you meet them. You don’t have to catch these!

Zorua
Location. Zorua is gifted to you in Driftveil City and is the only Zorua of the game.

Eevee
Location. You will get this Eevee in Castelia City by talking to Fennel’s Assistant who is in the building next to the gym.

Deerling
Location. The nature of this gift is different so save before you are taking it from the Seasons Building of Route 6, a scientist will give it to you.

Dratini / Gible
Location. When you have defeated Banjirou (Black Skyscraper / White Tree Hollow) Go to Sangi Town, Alder’s House…he will give you a Shiny Dratini for Pokemon White 2 or Shini Gible for Black 2.

Happiny
Location. You will find her in the house between Nacrene City and Route 3. She is given as an egg by a girl inside!

Magikarp
Location. Magikarp can be found on the Marvelous Bridge where a man will be selling it for 500 PokeDollars. It’s a scam but, we are forced to ‘catch em all’

These Pokemon are the species which are extinct now but are discovered via making the use of some special fossils. When you have obtained these fossils you can give them to the woman at the right corner of the Museum (Nacrene City).

The first two fossil Pokemons are Archen and Tirtouga which you will get when you enter into the Nacren City’s Museum. Lenora will give you two fossils (Plume fossil and Cover fossil) you can revive Archen from Plume and Tirtouga from the Cover Fossil.

There are 7 more fossils in the game, you can get them by talking to the man in the lower caves of the Twist Mountain. He gives you a fossil each day!

Unique Pokemons are not as good as the legendary Pokemons but they are still unique and are obtained via different ways!

Minccino
Location. This Minccino has a rare ability known as Skill Link! It is hidden between two trees shown by Bianca when you visit Route 5 for the first time. All pokemons which are in the hidden holes are unique!

Mandibuzz and Braviary
Location. At times you will find the rare Mandibuzz and Raviary on Route 4. Black 2 will have Mandibuzz with weak armor on Thursdays whereas a Braviary with Defiant is seen on Mondays in White 2!

Volcarona
Location. A rare pokemon! You can catch it deep inside the Relic Castel! You can only reach to his area via the Relic Pass.

Haxorus
Location. Excluding the four Event Legends, when you have seen all the 297 regular Pokemons of the Unova Pokedex, go to Professor Juniper, and you will get a permit. Take it to the Cargo Service situated in the Mistralton City, so they take you to a place known as Nature Sanctuary. You will see the Haxorous there!

Shiny Pokemon
Location. You will notice some out of the ordinary pokemons as these pokemons will have shiny sparkles around them (some are only shining during battles) After catching it, you can confirm if it’s a shiny one by looking at the Pokemon’s summary, the shiny ones have star just next to their image. These are very rare and are often found randomly in the wild.

Shining Charm
Location. You will obtain the key “Shining Charm” when you have seen all the 649 pokemons! The chances to meet a shining charm are now 3 in 8196 or 1 in 2371.

Gift Shiny Pokemon
When you have been to Black Skyscraper/White Tree Holllow and defeated Banjirou. Move towards Sangi Town, Alder’s House. He will give you a Shiny Gilbe (Black 2) or a Shiny Dratini (White 2). Professor Juniper will give you a license item which gives access to the nature sanctuary that holds a Shiny Haxorus, after you have seen all 300 of the Unova dex pokemons.

Masuda Method
Location. There is also a chance (1 in 1366, 1 in 1024) to raise a Shining Charm. You can raise such a Pokemon if you have two Pokemon from two different language versions in the game.

Note: This method does not work for the Pokemon obtained via Platinum, HeartGold, Soul Silver and Diamond. You will have to trade with another real person!

These Pokemon are very special, even the characters and the story you move around will mention such Pokemons. They are very strong, unique and hard to catch.

Kyurem
Location. Legendary Kyurem can be used as a regular Kyurem or you can merge it with Zekrom and Reshiram to make it Black or White one. You need to catch Zekrom or Reshiram from Dragonspiral Tower first, then go to the Nortern cave of the Giant Chasm and find Kyurem there.

The Three Flying Legends
The three flying legends are not in Black and White 2 but you can transfer them from the Pokemon Dream Rader of Nintendo 3DS via the Unova link. These are Tornadus, Thundurus and Landorus.

Legends from the past
You can also grab pokemons from the older generations as well! Some of them might need some formalities to be completed before…

Regirock
Location. The Regirock is found inside the Mysterious Door of the Clay Road. You should find a hidden switch inside it (six steps to right and nine steps downwards from the circle of the entrance’s door).

Registeel
Location. Capture Regirock and you will get a key that unlocks another legendary pokemon on the Clay Road (Registeel for Black 2, Regice for White 2) Save your game after you have left the ruins and from the main menu go to Unova Link>Key System and then Key Settings.

Now select the last option “Mysterious Door” and switch it to the newly unlocked room. Load the saved-file and make use of the switch which changed the ruins to see Registeel inside.

Regice
Location. Capture Regirock and you will get a key that unlocks another legendary pokemon on the Clay Road (Registeel for Black 2, Regice for White 2) Save your game after you have left the ruins and from the main menu go to Unova Link>Key System and then Key Settings.

Now select the last option “Mysterious Door” and switch it to the newly unlocked room. Load the saved-file and make use of the switch which changed the ruins to see Regice inside.

Regigigas
Location. Regigigas is located in the basement of the Twist Mountain but you will have to capture Regirock, Registeel and Regice before you can go to Regigias and try to capture it.

Latios and Latias
Pokemon Black 2 has Latios whereas the White 2 has Latias, they are located at the Dreamyard!

Mesprit
Location. Mesprit is a legendary Pokemon from Sinnoh, you will have to visit the Heart Cave and you will then see the locations of all three Sinnoh legends. Mesprit is at the Celestial Tower.
Level 65, Type: Psychic, Ability: Levitate

Azelf
Location. Azelf also belongs to the Sinnoh, visit Heart Cave and then you will see the location. He is in the Northern region of Route 23.

Uxie
Location. After you visit the Heart Cave, you can see it next to the Nacrene City’s Museum/Gym.

Cresselia
Location. Another Legend from Sinnoh, once you have obtained the Lunar Wing you can find it on the Marvelous Bridge.

Heatran
Location. Travel to Route 18 and then find the Magma Stone, take it to the basement area of Reverse Mountain so you can catch this Legendary Pokemon from Sinnoh.

There are certain events which give you a gift Pokemon. When the time is right, go to the Mystery Gift Menu (Main Menu) and select receive gift. The pokemons can be obtained from any man at the Pokemon Center (in-game) you will also get a Wonder Card with your Pokemon.

Piplup
Event Date: Japan (2012 July 20 – August 9)
This legendary/special Piplup has two special moves, Sing and Round. The nature will be random and it will have a Classic Ribbon attached to it.

These Pokemons are only available in their particular games, you can only do the trading via Pokedex to get them in your sequel.