Nvidia And AMD GPU Prices Still 15% Above MSRP, What It Means For Next-Gen GPUs? 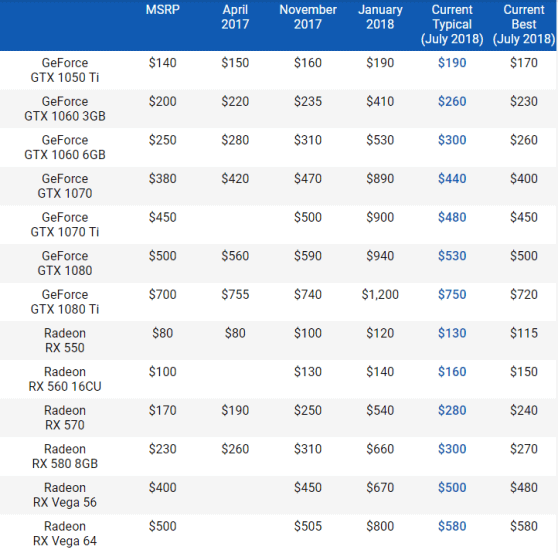 With the downfall of Cryptocurrency, the GPU prices have come down as the shortages had caused the prices to go sky high. However, despite the state of crypto mining and GPU prices coming down, most of the Nvidia and AMD GPU prices are still higher than their MSRP.

Techspot just recently did a comparison of Nvidia And AMD GPU prices before and after the cryptocurrency mining downfall. While the analysis is a lengthy one but you can see the gist of it in the image below.

According to the analysis, most Nvidia and AMD GPUs are still being sold at a higher price compared to their MSRP.

Most of the GPUs saw a 9% drop in their price and despite that, the prices for Nvidia and AMD GPUs are still above their MSRP.

As for the AMD GPUs, the lineup is still 15% above their MSRP and the report suggests that like Nvidia’s low-end and mind-rage GPUs prices for AMD’s low-end and mid-range GPUs aren’t coming down.

The reason why the prices for mid-range and low-end Nvidia and AMD GPUs are above their MSRP is that of the higher cost of GDDR5 and HBM2 compared to the prices at launch.

However, this is the opposite of the recent report that GPU prices have gone down an additional 18%. According to the report, GPU prices went down between 8% and 18% depending on the GPU.

With GPU prices being high, the GPU sales might be low, however, this will present a problem for the consumers as currently a bulk of current-gen GPUs are still in the market and AMD and Nvidia will not launch their next-gen GPUs before clearing out the stock for the current-gen GPUs.

This is not the only reason for the increase in GPU prices as there is a certain sector in the GPU market where GPU prices have increased and the credit goes to GeForce Partner Program(GPP).

What do you think of AMD and Nvidia GPU prices still being above their MSRP? Let us know your thoughts in the comments below.