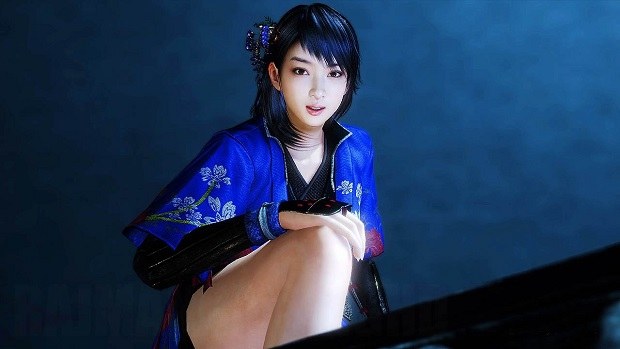 The Defiled Castle in Nioh basically tasks you to go through a series of double-doors and destroying Purple Crystals while gathering loot and defeating a ton of yokai monsters. This Nioh the Defiled Castle Walkthrough will take you through the mission and defeat the two bosses which are featured in the mission.

After the mission begins, find a Shrine in the left-hand side of the area.

If you head towards the balcony on the opposite side, you should be able to come across a locked double-door. At this point, you need to head back and take the stairs on the right-hand side.

Go up the stairs from the pool and you should come to a room with a Purple Crystal.

Head left after destroying the Purple Crystal and inside a room with a monster and Dung Ball x1. Head down the hall and take a right to get to the locked double-door you saw earlier. Unlock the door to find a new shortcut.

Now head back to the hallway and inside the water-filled room and head up the steps to fight a monster.

There is some loot in the area so make sure to grab it before heading up the stairs to the top. Head right from the intersection and towards the balcony on the upper right-hand side.

Make sure to destroy the Crystal Cluster, kill a monster, and drop down on the right-hand side of the balcony.

Continue along the wall to find a ladder and head right towards another door to speak with Ryunoshin. From there, head right to the door and towards the double-door to get outside.

Now head up the steps and turn left, right, and left again to come across some stone steps.

You’ll come across multiple monsters along the way in addition to a yokai at the very top. After dealing with the enemies, open the double-doors on the left-hand side in order to face Honda Tadakatsu.

This is one of the easiest boss battles in Nioh and can be completed without any issues.

In order to defeat Honda Tadakatsu, you need to destroy 3 purple orbs scattered around the arena. Do that and you’ll immediately defeat this easy boss.

After defeating the boss, go through the double-door on the right-hand side.

Defeat the enemies in there and go through the sliding door to destroy the Purple Crystal and continue left until you get to a staircase. Go up the stairs and into a hallway. Now open another set of double-doors and destroy another Purple Crystal.

After heading up the ladder, go through another double-door and defeat enemies inside followed by appeasing a Nurikabe.

You should be able to find a Shrine on your right-hand side. After praying at the Shrine, take the ladder up and into a hallway.

Open up the final set of double-doors and face the final boss of the mission; the Okatsu.

This boss is incredibly fast and has an unblockable glowing attack. One important thing to keep in mind is that she can quickly close in the gap and deal a ton of damage which is why you always need to be on your toes.

On the positive side, unlike other human bosses in the game; you can hit Okatsu with long combos. Therefore, try to conserve your Ki and continue attacking her until she gets out of range or dodges away from you.

I recommend saving your Living Weapon for the second phase of the fight in order to quickly end it.

Lastly, remember that it’s an incredibly hectic and difficult fight which is why you should expect to die several times. Don’t get frustrated if you fail to get her in your initial attempts.