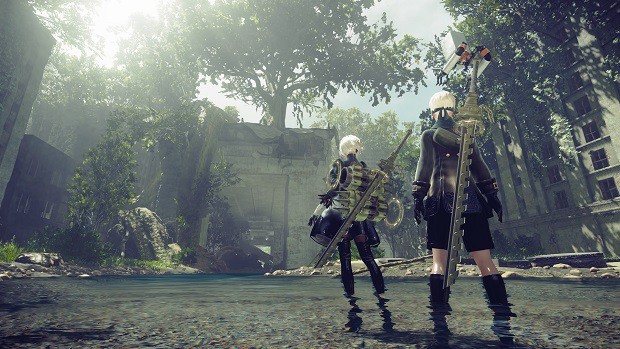 This NieR Automata Walkthrough will guide players through the Machine Village and help them find loot items scattered through the area while also completing quests.

Machine Village in NieR Automata is yet another non-combat area in the game where players can purchase stuff, pick up and complete quests or simply just explore.

In this NieR Autoamta Walkthrough, we’ve detailed everything you need to know about progressing through the Machine Village while completing all the optional activities.

The area starts soon after the completion of the Amusement Park section of NieR Automata. Players are tasked with investigating the village of machines.

They need to cross the bridge and talk to Pascal, a friendly Medium Biped. Speaking to Pascal twice will end up giving players Fuel Filter. An Access Point to the right of the biped will update the map for the player.

After talking to Pascal and updating the map, players can go up the ladder and enter a little shack on the left to open up a chest which contains Skill Salve. Going down the other ladder from the roof, players will come up on two platforms with a loot chest that contains Small Recovery. After picking this up, they can cross the bridge to the southeast.

Having crossed the bridge, players can talk to the two machines they encounter and receive the Sartre’s Melancholy quest. After picking the quest, players can go down the ladder to meet Pascal once again and pick up another quest, Lost Girl.

A loot chest in the lower right corner here contains a Small G Luck+ while another ladder leads down to a shack with Animal Bait inside it.

After picking up the loot, if players go back to where Pascal was, they will find a shop which sells various items including HUD mods and weapons.

The fuel filter which players received from Pascal needs to be delivered to Anemone back at the Resistance Camp. Players can take a shortcut now and instead of going south from the entrance of Machine Village, they can go southwest down the ramp to reach City Ruins. Players will be able to push the giant metal cube blocking the path to open up a shortcut.

Once players are back in the Resistance Camp, they can give the fuel filter to the resistance leader but it is recommended to complete all other side quests from the camp first.

If players have done all the other quests, especially The Manager’s Request, they will be able to enter materials storage. Passing through the locked gate, they can go down the ladder and open the chests for Impact Bracer and Large G Luck+ while a pole to the left reveals some coordinates. These coordinates are required for Resistance Disappearance quest.

After giving the fuel filter to Anemone, players will get Viscous Oil which they need to take back to Pascal. Once players have returned to the village and handed over the oil, they will get a new mission from the Operator warning them of a Goliath-class machine in the City Ruins.

Players can use the shortcut they created earlier to go to City Ruins and fight the Goliath. The strategy for this is the exact same as the one from the very first mission of the game, Abandoned Factory.

This is all we’ve on our NieR Automata Walkthrough Guide. If there’s anything else you would like to add, let us know in the comments section below!