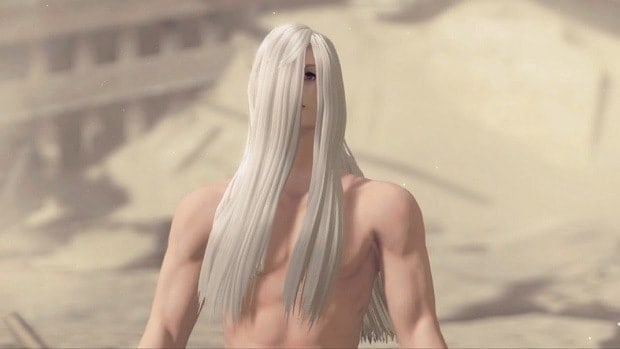 In our NieR Automata Adam Boss Battle Guide, we’ve detailed everything you need to know about exploiting Adam’s weaknesses and completing the boss battle.

Adam in NieR Automata is another easy boss battle. Adam starts the boss fight at Character Level 1 and won’t attack you. However, as both you and 9S continue to attack, he’ll start deflecting/dodging your attacks and will grow stronger.

As mentioned earlier, Adam starts the boss fight at Character Level 1 and won’t attack you. However, as both you and 9S continue to attack, he’ll start deflecting/dodging your attacks and will grow stronger. During his evolution, he’ll also get new attacks.

He’s capable of absorbing your bullets in a black shield and will unleash the absorbed power; dealing a considerable amount of damage.

You can, however, move away from him or dodge at the last second to avoid getting hurt. He will now go airborne but can be gone after with heavy offensive.

Apart from the aforementioned attack, he can also fire all the absorbed bullets back at you that also deal a massive amount of damage.

One of the best ways of avoiding both these attacks is to get behind him. He also has three types of kicks:

Finally, NieR Automata Adam can teleport to inaccessible areas and execute a couple of attacks from there. After teleporting to a location, Adam will either send orbs at you or create pillars directly underneath your position.

These can be dodged as before they appear, you can see a light coming out of the floor. He will hover around the arena firing at you so ranged is an option here with your PODs.

In order to dodge the pillars, try to look for a bright spot and move away from it. In addition to this, I highly suggest locking onto him at all times and have a constant damage source while he’s not accessible.

Once he comes down to the ground, keep on shooting and damaging him with your attacks until he is dead. Stick to these strategies and you should be good to go.