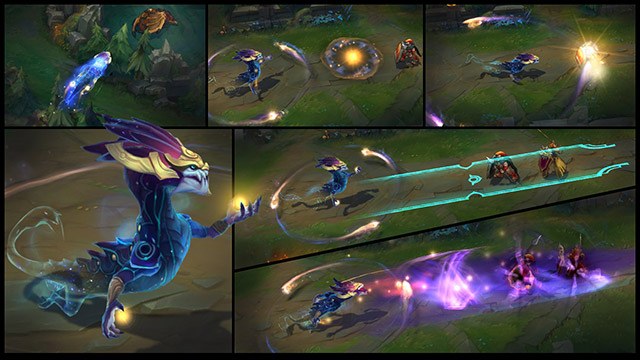 A celestial being that looks down at terrestrial life and revels in their fear, Aurelion burst onto the League of Legends scene only five days ago, with his debut trailer being released on YouTube’s League of Legends account.

Aurelion Sol’s abilities focus on him being a mid-range mage, being a mix between up-close and personal fighters like Aatrox or long-range heroes such as Kindred. His powerful celestial magics allow him to call the power of the cosmos against his opponents in the Rift.

Aurelion Sol’s abilities start off with “Center of the Universe,” with a trio of stars that constantly orbit him, dealing area-of-effect damage to any other hero that gets too close to him. With his “Celestial Expansion” ability he can increase his stars’ power, though this costs mana and the ability can only be kept up until Sol disengages the ability or runs out of mana.

Sol also has Starsurge, where he fires the core of a newborn star in a certain direction. The star continues for a while before exploding, but Sol can also stay close to the star as it moves, strengthening it and increasing its blast radius and damage. The star can also stun those caught within its blast when it explodes.

Aurelion Sol’s abilities even extend to his movement. His passive ability “Comet of Legend” has him build up speed the longer he travels in the same direction, but he loses speed on sharp turns.

Some of the speed he builds up is stocked as Escape Velocity, but those are lost any time he takes damage, so be careful. When Sol has enough Escape Velocity built up, he can activate “Comet of Legend” in order to pull in his stars and take off. He can fly a long distance with that, but he can’t turn and taking any damage will bring him down.

Sol’s final ability is “Voice of Light”, an attack where he blasts a massive beam of starfire at enemies, damaging and slowing anything that it hits. If any enemies are within the radius of his stars when he shoots, they’re also knocked back to the outer ring.