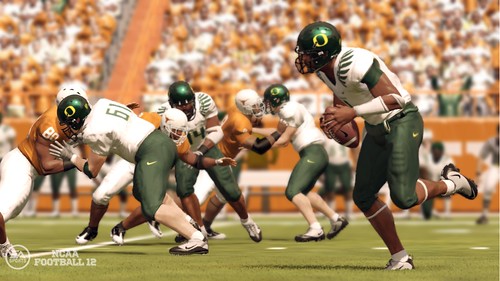 I hope you have enjoyed NCAA Football 12 but if you are new to the series, and would like to get your basics right, continue reading.

If you have are facing any difficulty in the offense, this guide will give you the basic understanding of what you should do in which scenario.

Everything you do on the field during an offense move counts toward the success of your attack. Even getting the basics right will make you a good players especially in competitive matches against your friends.

Time Your Move
It’s all about timing your moves and known when to make a run in NCAA Football 12. Play and test different combination and make sure you know which buttons to press and fun when you are planning an attacking move. Practice, Practice and more Practice.

Juke – When You Can
You can cut the defenders approaching you when making a run by a Juke. It’s a dangerous move and if you can’t keep your momentum you will surely be in trouble.

You can easily make the defenders miss with Juke but it requires great skill and agility to keep your momentum. So make sure you practice it a lot, if you want to successfully reach the end zone. You can Juke by moving the thumb stick left or right on your controller.

Spin and Cover Up
You can do Spin by pressing B on your Xbox 360 controller and corresponding button on PS3. It’s a great move to beat the defenders but requires timing, perfect timing.

You need to execute this move only when a defender has an angle locked on you and if you end up using it in the crowd, make sure you cover up the ball immediately. You may lose the ball during the Spin if the defender makes a contact.

Using The Highlight Stick
You can use the highlight stick to gain some extra yards and beat the smaller defenders but its effectiveness depends on the elusive and trucking rating of the player.

Use the truck move if you have momentum going forward; use the elusive move if you want to avoid getting blocked by running backs. You can execute it by pressing up on the right thumbstick of your controller.

Aggression is Good, Only When Used Tactically
It’s good to be aggressive at times, heck it’s sometimes the only way out. Stiff Arm is one of the most aggressive moves in the game and your only hope to block the tackles while running along the sidelines. Always be ready for a Stiff Arm when running since it can make or break the game for you.

You can only use this move limited number of times, which makes it even more important to use it for the right situation. The trick is to time your Stiff Arm to the tackle animation. You can use it by pressing A on Xbox 360 and X on Playstation 3.

Don’t try to beat the defenders by choosing the gap, use Hurdle to get past the cut-down defender. Timing is very important here, if you miss timed, you may lose the ball.

Dive
Dive as a last resort near the goal line in hope of a touchdown. Dive will leave you unable to continue your run so it should be absolutely the last option.

If the defender times its tackle right, you can lose the ball even in air but it’s already your last option to gain some extra yards in the hope to reach the goal line so you should go for it.

Protect The Ball, Run Down The Clock
You can protect the ball by pressing RB on Xbox 360 or R on Playstation 3. Protecting the ball is crucial in late stages though you will run slow but you will avoid the tackles and keep the ball in turn keep your lead intact.

Pitch It or Fake It
Know when to Pitch the ball and when not to. Master the Pitch and you will become one of the feared players in the game. Get the defender to commit to Quarter Back and then shoot the ball but make sure you don’t get it wrong; you don’t want to do that during a tackle animation. You can Pitch the ball by pressing the LT button on Xbox 360 and L2 on Playstation 3.

Know when to fake the Pitch; you can use it to force the defender to commit himself to the running back. Fake the Pitch as soon as the defender locks on your Quarterback, though don’t rely on the Quarter back to carry it, they have low carry rating. You can fake the Pitch by pressing LB on Xbox 360 and L1 on Playstation 3.

You can use the following inside running game strategies to break the defense of the opposing team.

HB Iso
Use your fullback on the middle linebacker and attack the middle of the defense with a run.

HB Dive
Middle inside run without any lead blocker to create more opportunities to pass and forcing your defense to spread out. Make sure you cut-back when needed and gain few extra yards that the defenders will allow you due to the defense spread. Don’t make multiple attempts to cut down the defense instead, look for a decent gap to run away.

HB Draw
This attacking run is used when the defense is expecting a pass. It would make them think you are dropping back, only to surprise them in the middle with this run.

FB Dive
It’s quick middle inside run from the fall back to surprise the defense. FB is a blocker to start with, so it would an unexpected attempt to gain the yards.

QB Rush
Spread your receivers into the wide areas of the field making defense think you are going for a pass. It will force them to vacate the middle box area and once they do, go for a run.

QB Sneak
A short yard play, in which your quarterback runs to get the TD and get the short yardage we need. Avoid the nose tackles and use your center to push forward. When you cross the line, protect the ball. It will help you gain extra yards you need and keep you safe from the line breakers.

These offense moves help you take advantage of the outside field and surprise your opponent.

Only thing in your way are the safeties, if somehow you can miss them, you are gain extra yards. The outside run will force the defenders to spread out, giving you enough opportunities to send the wrong way.

There are several options available to you, choose one that is best suited for your style of games. They all require an active role of RB and QB though, so you will need great focus on what’s happening in the field to make the correct decisions which will ultimately decide the fate of this attack.

You can check these offensive plays from the options menu; it will help you decide which one to choose, in response to the situation you are in.

Every offensive play use either short passing game or go for the down field, choose whichever you are good at. Practice it in the practice mode and see the difference.

In short passing game, you need a fast QB, strong RB and TE, a good offensive line and patience, lot of it. If you have all these, you should use short passing and keep the ball moving similar to a running attack, wait for your chance, and send the killing pass. You will need a lot of patience to successfully pull this off while running down the clock.

In deep passing game, you need a quarter back with good throw, three good offense players who can break the defense line, ability to make blocking adjustments on the fly and the ability to make an interception.

If you have all these, you can go with deep passing. It’s a high risk move nonetheless but rewards are also high. You can stretch the defense with the runs of your offensive good players and when joined together, they should penetrate any defense. If you have the strongest offensive players on the field, you should go with the deep passing.

Pick a formation that helps you learn the defensive positions of the opponents. Send a man to attack at the start of the game and see which positions in the defense open up first.

It’s a great way to devise your strategy by learning the defense patterns of your opponent. Make adjustments to your field in response to the position of the safeties, you should learn that after few initial random attacks.

Note the response of the opponent, when you send five receivers on the wide, see how it tries to counter it. See if you can fake this move by exploiting the middle. Take full advantage of the size and strength of your team. Practice and Practice more.

Practice all types of defense against your plays in Practice mode and make sure you can execute your attacking moves with success in practice mode before you attempt them during a match. It’s always handy to have an extra TE or RB to block when under pressure.

Add hot routes to your attack, they will help you make quick changes on the passing plays. Sometimes an extra route is all you need to break the defense.

Don’t hold your own offense tips that you use in NCAA Football 12, sound them off in comments. Make sure you are sharing the general tips, not team-specific strategies.