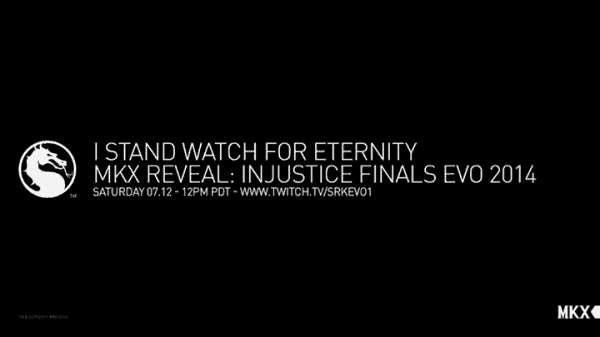 NetherRealm Studios might very well reveal another Mortal Kombat X character during ‘Injustice: Gods among Us’ EVO 2K14 grand finale on Saturday, Jul. 12 at 12:00 PM PDT, as teased by the newly released image.

So far, the confirmed characters are Cassie Cage, D’Vorah, Ferra/Torr, Kotal Kahn, Scorpion, and Sub-Zero. The image leaves plenty of room for guessing this mysterious character and from what everyone is gathering; the new character may be either Fujin or Raiden.

The quote in the image reads,

I stand watch for eternity.

If you have played previous Mortal Kombat games, you must know that both Fujin and Raiden watched over Earthrealm and are immortal. But we cannot rule out the possibility of the Elder God, Shinnok. So what’s your guess?

You will be able to Livestream the proceedings throughout the event, using Twitch. Head over to EVO 2K14’s official website for more details.

Mortal Kombat X is expected to release somewhere in 2015 for PC, Playstation 3, Playstation 4, Xbox One, and Xbox 360.