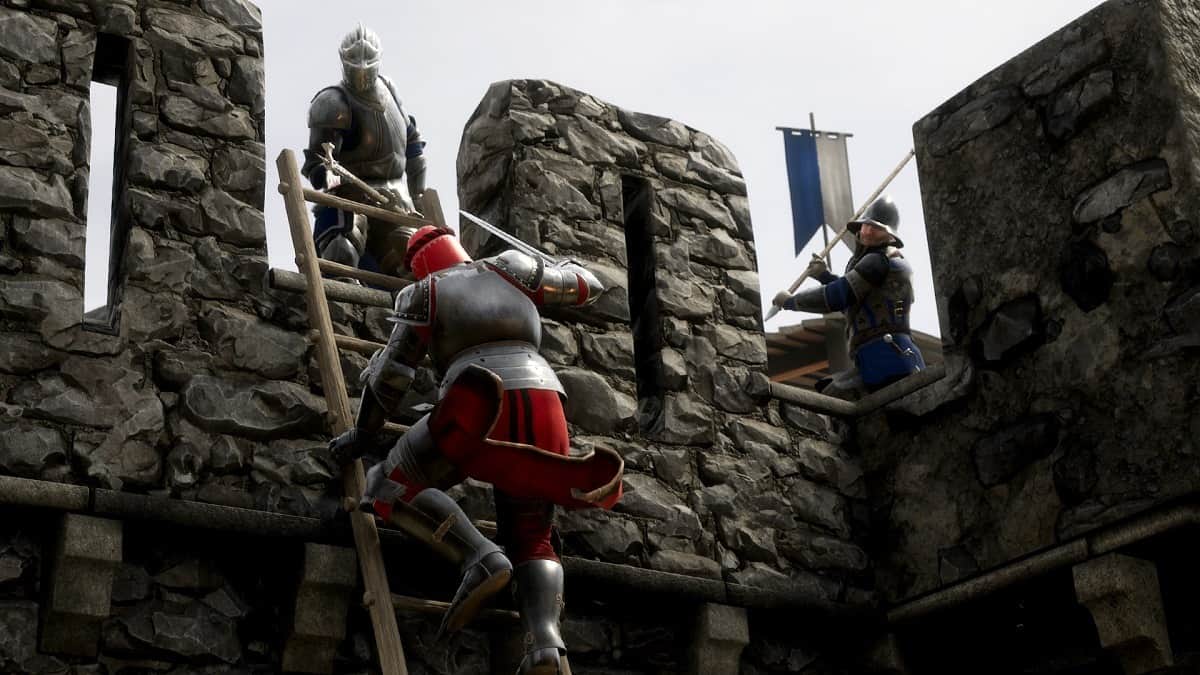 Cast aside Chivalry: Medieval Warfare for the gritty new multiplayer hack & slash title, Mordhau. Focusing on tight skill-based combat, you’ll need to be aware of every mechanic that goes into the gameplay of Mordhau. In our Mordhau Combat Guide, we discuss tactics and tips on how to excel at combat and achieve victory.

Your position and movement in a one-on-one duel will dictate a large part of actual fighting in Mordhau.

Naturally, either you’d be pressed for offense or retreating as a defensive measure, depending on your HP and the strength of the enemy you face.

When you’re being aggressive, you’ve to mean it by moving towards the enemy. Strafing sideways while attacking isn’t a good tactic and will leave small gaps for your opponent to make use of.

Similarly, for a defensive maneuver, move backward so to fend off the pressure by physically putting distance between you and the other combatant. Moving away from the enemy will also help you find cover or move to the safety of your allies.

Most of the time, when your foe sees you pace backward, they’ll try to get you with all the strikes they can get, burning their stamina down. At this point, you’ve got a chance to turn the fight in your favor and deliver strikes of your own.

Another neat little trick involving your movement is to fake a retreat. Basically, stop fighting your foe for a split second and run away as if you’re fleeing the fight.

The opponent will naturally chase after you and continue to deliver strikes if you’re within reach, depleting their stamina bar. Now you can quickly perform a 180 and perform a sword slash for an unexpected attack.

This tactic works well against heavily armored foes since they move a lot slower compared to you, so you can always play around with speed and take advantage of that upon a reversal attack.

Mordhau, like any other realistic combat game, favors those who cause their opponents to think twice before making a move.

The name of the game is to constantly vary your movement and attacks, so to create a non-rhythmic exchange with the enemy.

Keep them at their toes, by hitting from different angles, mixing it with heavy and quick swipes of your sword and parrying their moves to continue the cycle until you’ve dealt with the opponent.

Most beginners will resort to the ‘ol left-and-right or right-and-left swipe of the sword while they move sideways as well.

This becomes predictable quick and if your moves are telegraphic in nature, that will mean sudden death if your opponent can pick out the pattern. Avoid such maneuvers to avert a quick death.

You can follow up a sideways slash (left mouse-button) with an overhead (down on mouse wheel) or a long-ranged poke or stab (up on mouse wheel). Alternatively, you can kick your opponent that’s also useful when overcoming their guard/shields.

Mixing it up between these four motions is crucial to always keep an upper hand on the opponent in any fight you take part in.

As an extension of the “unpredictability” factor described above, it’s most fitting to allow your enemy to make the first move. The first attack can be described as their first mistake since they’ll always be on the side of failure on this one.

There are a few reasons for that. Firstly, upon executing a strike, their stamina depletes a little. This means they cannot afford to sprint away and make themselves a vulnerable target as you chase after them.

Moreover, after whiffing a strike or just having their attack blocked, they’ll have to recover that will take up a short period of time for you to attack.

Lastly, having your opponent strike first means you can make a good read or even an educated guess allowing you to parry and perform a counter.

All of these unfavorable scenarios for the enemy player automatically puts them on the losing side of this duel. Most players have a select few attacks that’re their favorite and they’ll continue to throw those out.

Therefore, reading the opponent will let you in on their playstyle making the fight a whole lot of easier.

In the case that an enemy holds their ground and won’t attack first, provoke them into making the first move. This can be done by throwing knives or other projectiles that triggers a response from the opponent.

Stick with your Teammates

No matter what your strengths are, a 2 vs 1 fight is always an unfair and unwinnable one. This is because teamwork is encouraged so whether you’re rushing forward or retreating to safety, you need one of your pals to back you up.

Always go for a sole player or better yet, outnumber him with one of your teammates.

Even when attacking as a team, the same “unpredictability” factor comes into account because it’s much difficult to defend against multiple types of strikes than a single one.

You and your teammate should vary their attacks so if one goes with an overhead, the other can perform a stab or a kick so to throw off the opponent in the fight.

Moreover, both you and your comrade should attack from different angles so to rotate around the enemy and baffle him with the position and direction of the attack. After all, the opponent can only hold his shield in one direction.

Your playstyle and teamwork are also correlated in a way that the former should complement the latter. A bow and arrow user won’t have much in terms of defensive options so it’s fitting to pair up with an armored knight.

Similarly, a shielded ally can help you with your spear-playstyle so you can dart around enemies and stab them while your teammate blocks any incoming damage.

The foe will think twice before attacking since he not only has to defend against the spear but the sheer power of the sword. Archers are very useful at delivering lethal hits on armored enemies, thanks to their accuracy and precision for weaker parts.

With that said, an archer should always be accompanied by a suitably armed and armored teammate since archers pretty much suck at close-quarter combat.

Therefore, character diversity in a team is the way to go since it has incredible strategic value and potential. Remember, there’re counter-characters for every class so the entire team sticking with one character and playstyle isn’t a good idea.

Eventually, you’ll come across an enemy combatant charging towards you while on horseback.

That’s almost always true since such players won’t think twice before attacking as naturally a horse will fasten the combat and have them rush to get kills.

The counter to such opponents works in the same way as the Berserker for all of you Gears of War players.

Basically, you lure a horseman to charge straight towards you as you have your back against a solid obstacle like a wall, door boulder.

Then you simply sidestep onto the left or the right at the last second to have the equestrians clash into the obstacle and losing their entire momentum.

This will allow you with the opportunity to get decent hits on the horsemen since he’ll be very vulnerable after coming to an abrupt halt.

It goes without saying, when facing horsemen, it’s best to stay out of open fields where you’re just a sitting duck (or a moving one) for the riding gentlemen to take care of.

Quickly sprint and find a solid cover to be used as the eventual demise of the horseman.

If you’re on the horse instead and want to utilize it to best of its ability, it’s advised to analyses your surroundings before galloping.

You don’t want to crash into a wall and suffer for it, instead use the different speed of the horse for different occasions. The forward key has three functions, depending on how long you hold it. The horse can thus either walk, trot or gallop.

The speed of the horse is very closely associated with its strength or health. Horses do not regenerate health and come in three variations: light, medium and heavy.

Here, the medium horse can take more hits before being down, compared to the light horse, but will also be slower. Same is the case for the comparison between heavy and medium or heavy and light.

Momentum-based strikes are key to dealing hefty damage from horseback, so make sure your horse is galloping when you pick out an enemy target.

Scattered across the maps across different game modes, you’ll find mounted weapons you can interact with. These include catapults and ballista. The former can be adjusted in terms of position and the angle can be controlled with the mouse wheel.

A ballista projectile will stun enemies (even when it misses) and put them in a ragdoll state which has a pretty long recovery so they’re vulnerable to follow up attacks.

For the ballista, it will always be stationary and works in a similar fashion to a crossbow, albeit a powerful one. Again, the range can be adjusted depending on what’s the angle you chose with the reticle of the ballista when targeting an enemy.

Although the multiplayer is and will be the real reason we bought this game, you won’t get good at it without practicing all the above concepts in-game.

You can do this and learn more by playing through the single-player content like tutorials or the Horde Mode against the AI.

Practicing the moves while in the game will allow you to get comfortable with your movement and maneuvers overtime. Furthermore, you’ll pick up new strategies as you observe different enemies’ attack patterns and look for their vulnerabilities.