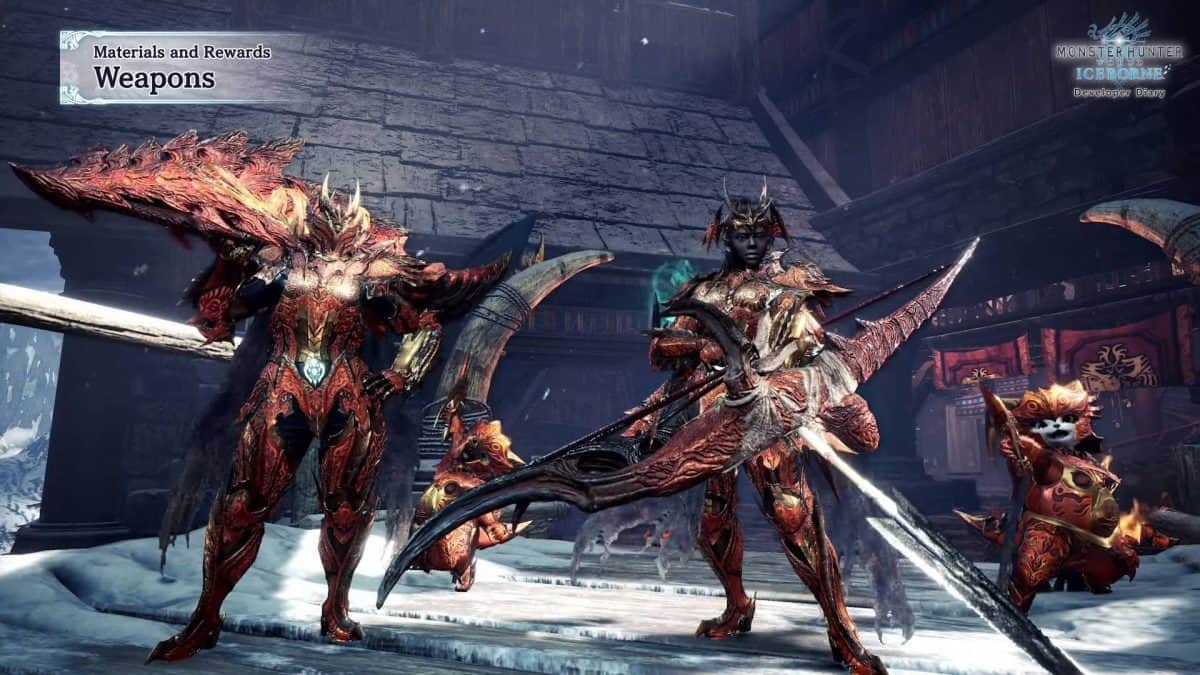 These Awakened Weapons distinguish themselves from other weapons in the game, and offer a variety of new tricks to players… assuming that players are able to get their hands on them in time.

In this guide, we will talk in comprehensive detail about the Safi’Jiva weapons and every bit of information related to them.

Safi’Jiva Event
These are an entirely new system of weapons with seemingly unlimited customization options that can augment and buff the weapons in a plethora of ways.

However, these awakened weapons are only available during the Safi’Jiva event, so make sure not to dawdle and get to it as soon as you can, lest you venture further without the aid of such magnificent weaponry.

Now you’re probably wondering what this event actually entails. This event, which begins on 13th Dec 2019 and lasts until 5th January 2020, features Iceborne’s second siege monster – the “mature form of Xeno’Jiva,” rumored to be called Safi’Jiva by the community.

Now don’t fret over the dates too much. Capcom has confirmed that the event will return eventually, however, the dates have not yet been disclosed, so ‘soon’ can mean many things. Best to play it by ear and participate in the event right now.

Fun fact: you can actually battle the creature in Practice Mode. Assuming that you’ve completed the Master Rank 24 Special Assignment “Across the Lost Path.”

You unlock a great deal more by completing this assignment, so definitely do that before the event starts.

To give you a little taste of what to expect – the creature is an odd mix between a Xeno’Jiva and the Behemoth (from the Final Fantasy 14 crossover).

It’s a large dragon-esque entity that shoots beams from its mouth, swipes its claws at you, and has a propensity to tackle you when you’re too close. Like Behemoth (but unlike Xeno’Jiva) you can also mount it.

Once you’ve dealt the creature enough damage, it will retreat to a different location and absorb energy from the ground.

The battle is divided into phases, and you’ll go through several different regions. You just need to follow it down to lower sections whenever it leaves by manually attaching to a wing drake at the edge of the arena.

We won’t spoil the whole battle for you, but you get the kind of endeavor this whole thing is now. Head into practice mode and try this out for yourself.

The reason why we’re encouraging you to do all this is so that you can obtain the unique items from the monster during the event. These are rare, useful items that will aid you immensely as you journey further into the depths.

How to Get Awakened Weapons
The event is similar to the Kulve Taroth, in that the Safi’Jiva randomly drops loot as Siege rewards. This loot is what we so desperately seek.

Unlike Kulve Taroth, however, they do not have random stats based on rarity. Every single Awakened Weapon comes with identical stats as the next.

Furthermore, you are guaranteed one weapon of the same type as the one you use to slay the Safi’Jiva; you can get the exact Awakened weapon you desire if you plan it out properly.

Once you have the weapon you want, you can pump a new resource called Dracolite into each one. Doing so randomly rolls perks for you to select from.

You can mix and match up to five of these abilities onto the weapon at will — upgrading some of them up to five levels.

The one randomized feature of the Awakened Weapons is their element or status. Although each weapon of a given type will deal the same amount of damage, what kind of element or status effect they’ll have is completely up to chance. It’s actually possible for a weapon to have every single damage type.

You’re only allowed to take pick up from a few dropped items. At the end of the run, you may be given the option of several different Awakened Weapons, but you can only choose to appraise and keep a few of them.

Dracolite
Alongside the Awakened Weapons, players will also get their hands on a new item: Dracolite. These function in the same way as Armor Spheres, except they upgrade weapons instead.

They are of 4 different varieties (based on the information currently available):

With the aid of Dracolite, players can level up their Awakened Weapons, with each individual level offering a different benefit.

Instead of boosting the stats of that weapon, a new level instead offers players 3 Perks to choose from.

These Perks can be extra damage, Bonus Affinity, even entire armor sets. The more basic skills can also be upgraded from Level 1 to Level 5.

If you equip bonus elemental damage, for instance, you can roll for the perk again and again to raise it to Level 5.

Note that you can only equip 5 Perks at any given time. This may seem like a hindrance, but you are allowed to change them at any point. You will need more Dracolite to keep rolling for more Perks.

You get a little bit of Dracolite just for “repelling” Safi’Jiva for the first time, after the Master Rank 24 Special Assignment “Across the Lost Path.”

But wait, there’s more! You actually have the option of not picking any of the 3 Perks offered to you, instead you can opt to ‘Store’ these Perks.

Each Perk has a Rarity Level, and by storing these Perks, you increase the odds of obtaining an ultra-rare Perk when you raise your Awakened Level further.

And that’s all there is to it. By fighting Safi’Jiva, it will drop loot (which includes Awakened Weapons and Dracolite) and you can use that loot to obtain new Perks and Abilities.