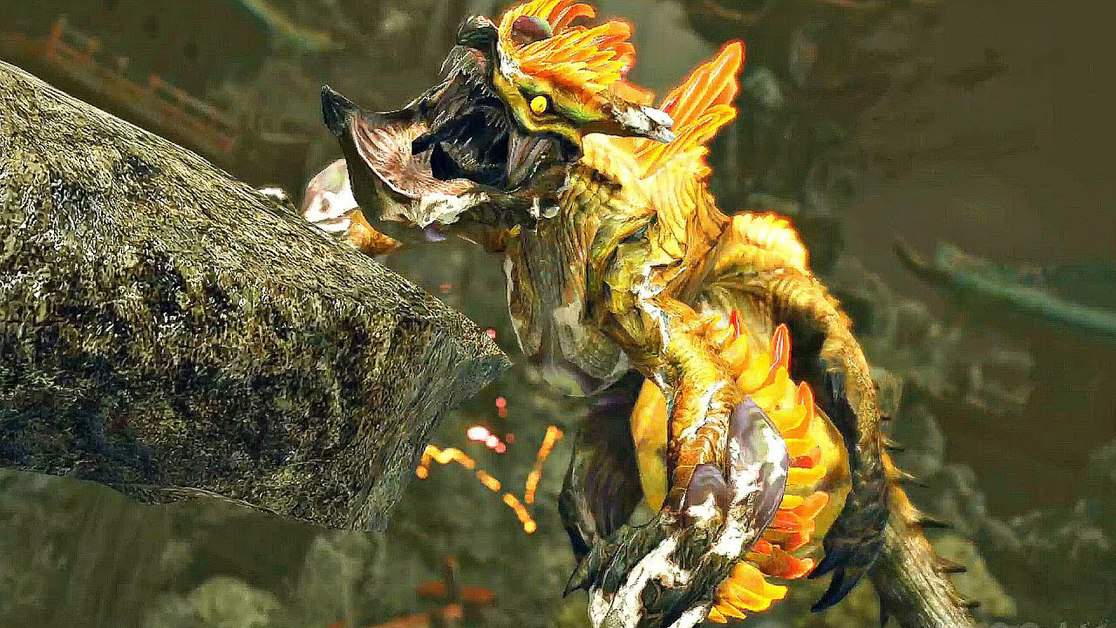 Let’s talk a little about this monster’s specialties and weaknesses first. According to the game’s description, this monster has thundersacs that glow as they contain an electrical charge. These organs of Thunder Serpent Narwa generate a strong magnetic field that lifts the creature and everything around it high up in the air.

Thunder Serpent Narwa can be found in Coral Palace, and it isn’t very friendly when approached. It belongs to the Elder Dragons species, and its main weaknesses include Dragon and Ice. This monster is resistant to Fire, Water, and Thunder.

Now let’s talk a little about combat and then jump into the walkthrough guide for defeating Thunder Serpent Narwa.

For combat, it is suggested that you use wyvenfire, dragonator and ballista or cannons while fighting this monster in enraged mode. It is also recommended that you jump on higher platforms and avoid hit with nova attacks as much as you can.

As for hunting information, attacking the thundersacs of this monster will help you discharge and ground the beast faster. The bottom sacs are the main weak points of this monster.

Hunter should attack these sacs when they are not covered with fins to ground this beast effectively. One good move would be to use the levitating terrain while taking down this monster.

The boss fight will start with a cutscene where you will first see the frightening Thunder Serpent Narwa. The monster will roar in rage, and the battle will begin with a time limit of 50 minutes.

To get started, you should open up the Supply Box by pressing A and load yourself with Ammo and Power Coating. Now take the shortcut one, and after a cutscene, you will find yourself standing right in front of the Thunder Serpent.

The boss fight is divided into three phases.

The monster will begin attacking you with its robust and broad area attacks by shooting lightning from its tail. Grab your hammer and attack it on its glowing area from below.

Attack the face to cause maximum damage. The thunder serpent will fall on the ground giving you full opportunity to strike its head with your attacks. The cut damage will be 70 for the head; the Blunt damage will be 75, while the Ammo damage is 45.

Strike the glowing sacs whenever you get the chance while also dodging its electric attacks. Ammo attacks are a great way to attack while avoiding as they help you attack while maintaining an adequate distance.

The thunder serpent will also suspend itself in the air for a while, which again will give you an excellent opportunity to attack the sacs on the underside.

Attacking its horns will also cause 90+ damage. The key to attacking this beast is consistency. Attack the weak parts whenever you get the chance.

The beast will create its magnetic field to enable floating at one point. This will be the point when you unlock the Splitting Wyvernshot.

The beast will be enraged and powerful during this time, so you need to dodge as much as you can. During the first phase of the fighting, the ground breaks multiple times giving refuge to the thunder attacks.

This won’t cause major harm to the player, but it would be best to defend yourself. Moreover, Machine cannon and Ballista spots will emerge from time to time on the ground.

Shoot the cannons at the beast whenever his underside sacs are pointing towards the cannon platform. The monster will fall on his back, and you can get on his level and attack his sacs.

Keep fighting Narwa until it is stunned and then spot the three spikes in a wall towards the left side. Utilize the controls nearby and fire a mortar round at the beast; this will inflict massive damage.

In phase two, you will observe Narwa’s attacks becoming more aggressive. During this phase, you will need to watch out for its electric breath attack. This attack covers a 360-degree radius around the monster’s body, but it is comparatively easier to dodge. Once you see these rings form around Narwa’s body, run away from it to avoid it.

Narwa’s limbs and tails will become charged, and now you can target these areas for maximum damage. As you attack Narwa, platforms will begin to rise from the ground. Some of these platforms will have Machine Cannons and Ballistas to shoot the beast.

This phase will come to its conclusion once you have unlocked the Dragonator. Like the previous phase, stun Narwa with your attacks and then head on to the spikes on the wall to activate Dragonator. This will cause massive damage to Narwa.

Narwa will get even more aggressive during this phase. Again you will observe platforms appear from the ground, and you will have to utilize the cannons to attack Narwa. Narwa will occasionally do its tailwhip, which will cause a medium amount of damage. The body of Narwa will once again get charged. Once Narwa rests its charged stomach on a platform, you can quickly attack it. Hunters can also ride on the Palamute to run faster towards Narwa’s exposed weak points.

Narwa will also unleash its expanding ring attacks, which players will have to dodge. The rings will be unavoidable at some instances of this round, and you’ll have to choose which damage you want to take or not.

You will also observe many cannons appear on the platforms towards the end of round three. Utilize these cannons and continue hitting Narwa till its HP runs out to defeat it.

Once the HP depletes, Narwa will fall, and your main quest will be completed. Keep an eye out for the items that Narwa will leave behind during and after the fight. Items like Narwa’s claws which you will obtain while hitting Narwa are rare items to collect.