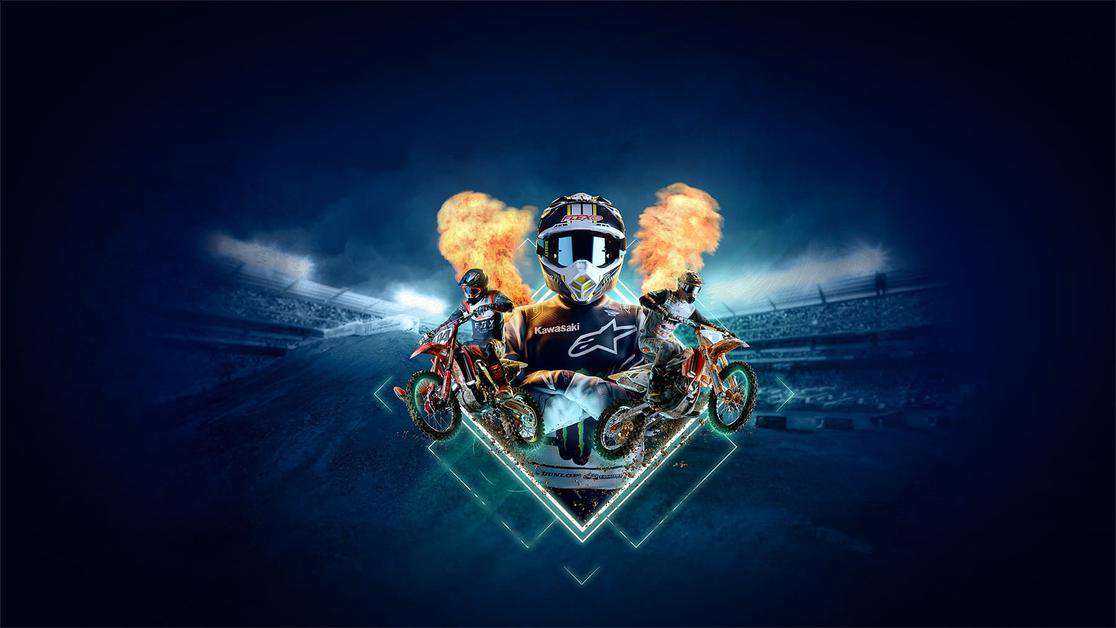 Monster Energy Supercross 4 might sound like a pretty generic game to a casual gamer. However, for sworn motorsport fans it’s a whole virtual life. The brand new addition to the franchise marks the start of a new era for virtual motocross, one that I, as a casual, can’t clearly comprehend. You need to really get into the skin of driving a motorcycle to be able to go far in Monster Supercross: The Official Videogame 4. The learning curve is pretty steep and one that not all drivers can climb at full speed. This is our review for Monster Energy Supercross 4.

It might seem that this review starts off on the wrong foot but it’s only because you need to know a thing or two about motocross in order to be able to really appreciate it. In theory, all you need to do is jump and drift and sway your weight but the experience is so realistic that you cannot take everything in vain. Monster Energy Supercross 4 has both single and multiplayer modes and for the needs of this review I played the single-player career mode.

The bread and butter of Monster Energy Supercross 4 is its gameplay. As such, this will be the area where I’ll mostly touch. Starting off with the career, you can create your own character using a handful of presets, change colors for your driver and bike. In addition, you can choose one bike manufacturer as your bike’s brand but the differences between them are too little to make a big change. 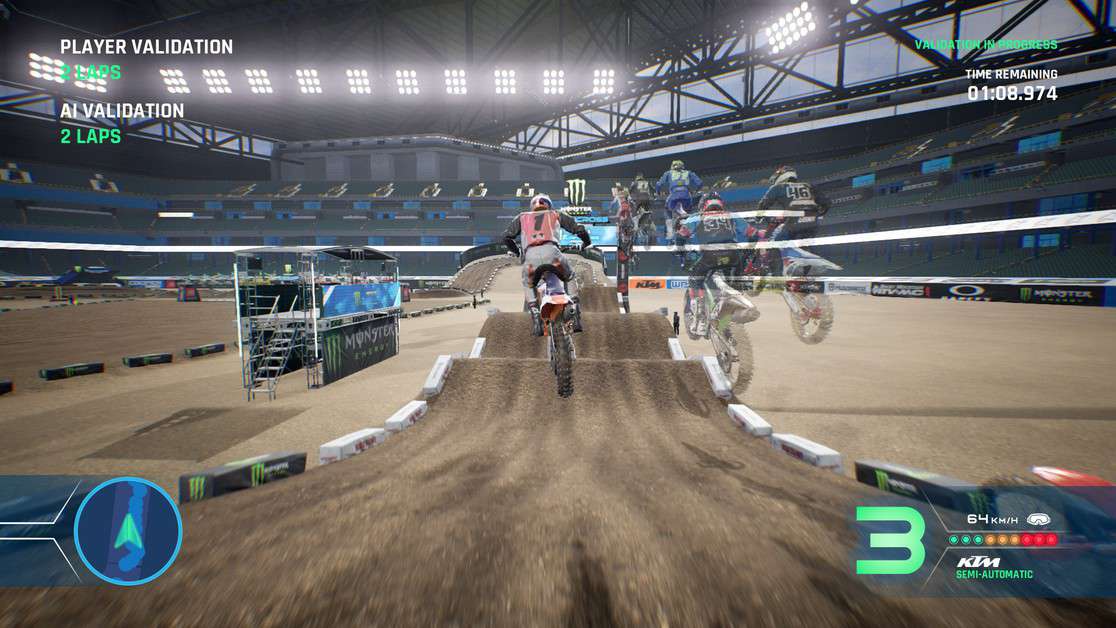 Where you will see a big difference though is at your progression. After each match, you will earn credits (CR) as well as skill points for your drivers. You get CR for every match you compete in and skill points for taking on training challenges. However, both the matches and the training challenges aren’t for the faint-hearted. I found Monster Energy Supercross 4 to be an extremely difficult game while I knew nothing of motocross. Taking control of your weight while on air or in turns can mean the difference between a win and lose and, oh boy, did I have a lot of losses. Even with an easy setting of AI drivers, the difficulty of winning a race is insane. My only verdict is that Monster Supercross is for motocross enthusiasts that have a passion for the sport and not only looking for a motorcycle game.

Where I will stand to criticize Monster Energy Supercross 4 is at the fact that its high difficulty will prove a challenge for franchise fans but it will become a real burden for variety gamers. How long can you go with finishing last in every race you compete in? Don’t get me wrong, the game is an altar for motocross simulation, having you move your weight to stabilize your bike and manage your speed to stay on top. The movement is realistic, the sound is realistic, even the AI is super realistic. It’s just a matter of audiences from this point on. 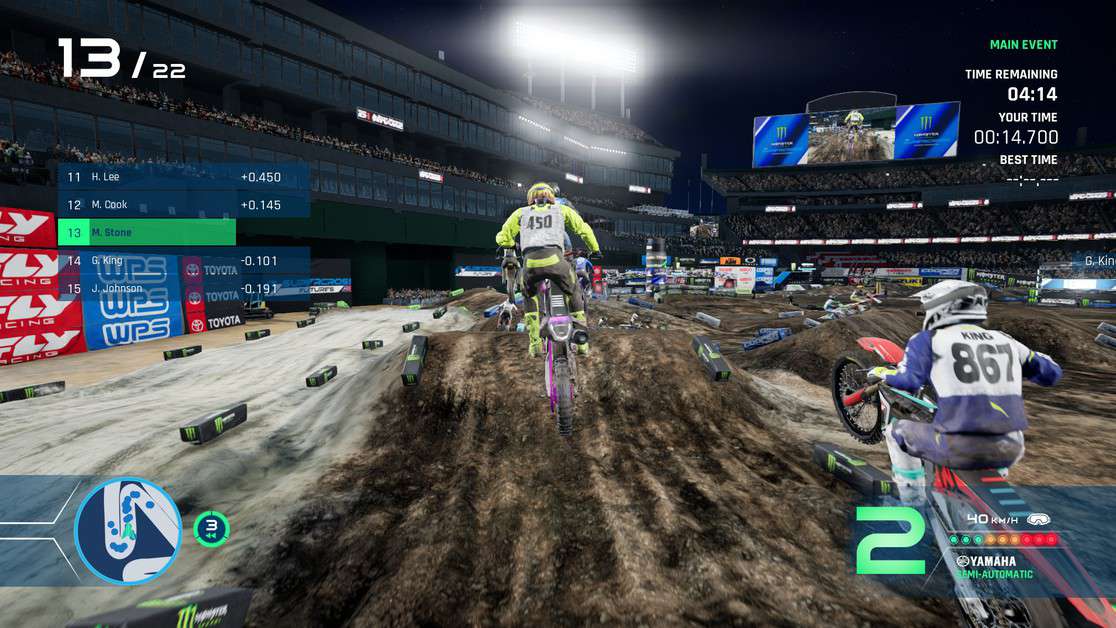 In order to be able to fully grasp the mechanics of this game, you’ll need to either be a real enthusiast of motorcycles or have steel patience. Every mistake is punished and it’s frequent that you’ll find yourself in silly misses that will cost you your place. To tackle that, Monster Energy Supercross 4 includes a rewind feature that lets you rewind on queue a few times in each race. This is a good thing to include but still, it doesn’t make a small difference given how unforgiving the AI is.

Even without the AI and its learning curve though, Monster Energy Supercross 4 has some rough edges in gameplay too, although being extra realistic. I wouldn’t just it that harshly if it wasn’t for the unfairness of matches. The AI starts pushing you from all sides after the start line, you need to have specific speeds to tackle jumps and turns and even the smallest change in speed can result in your bike overturning. This is something that even the rewind feature can fix and I bet it caused issues for seasoned players too.

In terms of progress, Monster Supercross does a great job with the skill point system. As you progress from the Futures league to the Rookie to Pro, you’ll get upgraded bike control, braking, better turns, and more. These upgrades make all the difference in your future matches. On the other hand, I wasn’t so excited about the bike component upgrades. You get a variety of component manufacturers to choose parts from. But! All those components have specific stats that stretch across manufacturers so there’s not a better one to choose from. It’s up to the item tier, where you’ll see a real difference. 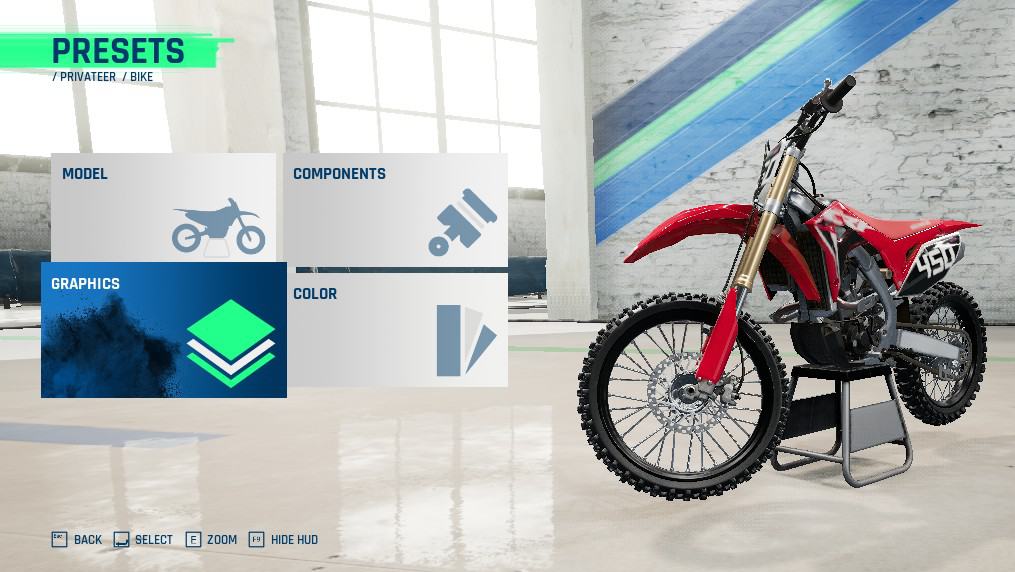 Both the CR and skill point acquisition is a grinding experience. You will need to go on tough races over and over in order to get better both in techniques since you get to learn the game better and in in-game enhancements. However, if you are a seasoned veteran in motocross, you will find the experience fun. It surely scratches an itch.

Where the game shines it’s at its multiplayer segment which, I, unfortunately, couldn’t test. The Compound mode though seems to be the highlight of the game as you and your party can roam freely in an open world area and finally get rid of the racing pit. In addition, Monster Energy Supercross 4 includes a Track Editor mode, where you can create and try your own tracks. The feature is also destined for real enthusiasts since it takes time to create a real track with everything a racer might need. 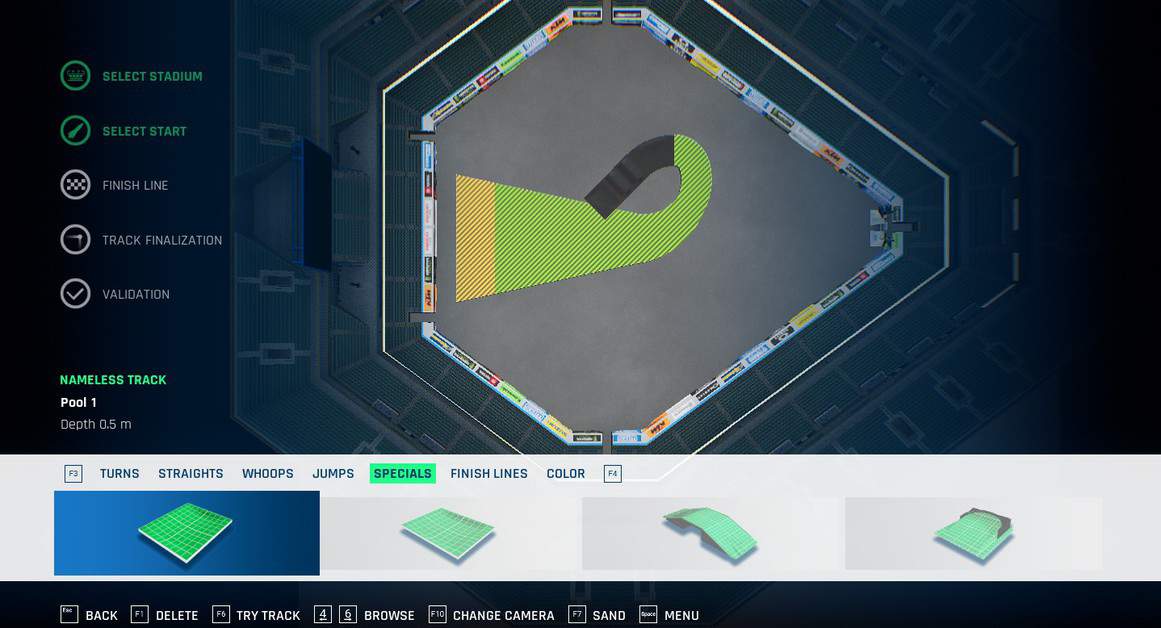 Where I want to give huge props to Milestone, is the sound and graphics department. Monster Energy Supercross 5 looks and sounds amazing. I can’t think of a more realistic motocross experience out there and for that, it has my appreciation. When the races go bad and you want to maybe call it off for the night, the sound of engines and background music lure you in for more. If the developers manage to tweak some of the unfairness its gameplay includes, this could be easily a worth buying game for everyone.

To sum up everything, Monster Energy Supercross 4 is a game destined for motocross lovers and hardcore racing gamers. I think it’s not an understatement to say that with such a steep learning curve, you’ll find yourself aimlessly raging and grinding through a game that wants to give you the most realistic motocross experience out there. In terms of graphics and audio, Supercross 4 is very impressive. However, you won’t have a good time buying it just to pass the time.

Monster Energy Supercross 4 is developed by Milestone and is available on Playstation 4, Xbox One, PC through Steam, Google Stadia, and the Playstation 5 and Xbox Series.

Monster Energy Supercross 4 is not destined for casuals or even variety gamers. The game's steep learning curve and grinding character make it a "go" only for motocross fans.