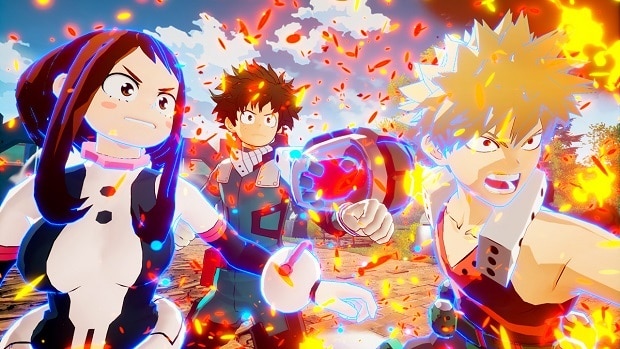 In his quest to stop the outbreak of dark magic, Jin must find utility for all of his six animal transformations as he fights through a perilous land filled with monsters blocking his path. In between, he will come across opportunities in forms of gems that allow him to upgrade his gear. Our Monster Boy and the Cursed Kingdom Gems Locations Guide will show you all the three rarities of gems i.e. Power, Legendary, and Golden.

Gems allow you to upgrade your weapons and armor at the Blacksmith. Here you can focus on allotting enhancements to your gear and make them a fiercer and more menacing version of their previous selves.

The gems come in three rarities i.e. Power, Legendary, and Golden and you will be able to acquire them in the same order as well.

You will be first able to start collecting Power Gems when you make your way to the village as a frog. Each gem is kept in a chest that you will need to unlock.

Some just require interacting with them, while others will require you to complete elaborate puzzles. Below, we have shared all the locations for where you might gather these Gems.

Green Fields
West of Village of Lupia in the region. On a stone ledge held up by short pillars. Use your frog transformation to hop onto the platform and find the gem in the chest.

Crystal Caves
Here, you will need to ground-pound a plant in the center to give you a boost to the jump as the pig. Try to land in a way that the plant pushes you to the top-right corner where you will find the chest on one of the icy platforms.

The Lost Temples
There are two gems located here. The first is during you carry out the boulder chase sequence. While running from the boulder, you will come across a blue chest that you only have enough time to open.

Do not worry, you can open it and get hit by the boulder only to revive again and this time, collect the gem.

The second gem is after you have acquired the ability to transform into a lion. After exiting the dungeon of the Lost Temples, break down some blocks by charging into them as the lion. This will unveil the treasure chest that you can open for the gem.

The Sewers
Descending your way from the lighthouse, you will need to use Frog’s tongue ability to steer yourself with the bows onto the platform holding the chest.

Since it is surrounded by some blockage, shoot fireballs at it by becoming a dragon to unlock the chest and get the gem.

Pirate Shore
In the underwater section where you help the pirates out, use the Frog’s tongue to trigger the explosions from the bombs breaking one of the icy walls that have the chest embedded inside. Swim in over to collect the gem inside it.

In the gloomy region underwater, you will need the Prince Tunic to shed some light so you can see your path. The chest will be lying on a platform above a green light. The third chest can be found by heading to the right of the lighthouse.

Once you have ascended the ladder to take care of the hummingbird with Frog’s tongue, transform into the snake and move into the small passageway to the right that is covered in moss.

Slither your way up and then transform back into the frog to jump onto the moving platform. The chest is situated on the ledge to the top-right of the screen. Use 10 thunder spells to unlock it and get the gem.

Skullrock Beach
In the underwater section and to the southwest, swim your way across the bombs and then through the blocks to come across the chest containing the Power Gem.

The Volcano
Transform into the lion and then dash onto the button to lower the boulder. Lower it further by pushing onto the rocky platforms until the boulder smashes clean through and allows you access to the chest containing the gem.

Castle Prison
In the stealth region of the area, you will find the chest behind one of the penguins on the second level.

Haunted Manor
In the water section, clear out the blocks here with the help of the boulder and then use your magical skills to possess the two tables and stack them one on top of the other.

Similarly, manipulate the spiked boulder as it rolls from the left to the right. Hop onto the tables and keep your balance. Then move over to the chest location that has now been made accessible due to the boulder. Collect the gem.

Castle of Lupia: Right in the middle of the section, evade the spitting attacks of the creature and then move in to unlock the chest for the final Power gem you will collect.

Deadwood Grave
Within the starting area of the graveyard, transform into a dragon and fly to reach the rest. Open it for the gem.

The Volcano
As the lion dashing into the region, you will notice a chest on a platform directly above you.

Now make your way to the chest as quickly as possible, right after you see the torch light up unless you want to be blocked out of the entrance with the lowering of the door. Collect the gem inside.

For the second chest, use the blocks to move over the streams of lava and then form ice blocks. This will allow you to pass safely through the lava waterfall and onto the block that will lead you to the top where the open door lies.

Now make use of the other block and dash into it so that it lies halfway between the lava fall so that you can hop onto it and then over to the door’s entrance to the chest.

The third gem can be found inside a magic chest situated in the Main Room of The Volcano. It will be situated on a stone ledge and you will need to focus 15 magic wind spells to unlock the chest and collect the gem inside.

To the region that contains the cloud, transform into a pig and sniff out the chest. It will be right nearby. Move close to interact and open the chest for the gem.

The final chest is located to the right of the region, where you will need to freeze fire projectiles with your Ice Sword as the lion. At the top, you will find the chest you are looking for.

Hunted Manor: After acquiring the Dragon Talisman (that is after beating the final boss!), head to the left of the region where you will need to adjust the funnel so that it faces to the left. This is done by ground pounding (as the lion) on the button nearby.

Use your fire-breathing ability as the dragon near the funnel to open a passageway. Adjust the funnel again and position it so that it lights up the lantern and causes it to create a portal.

Entering the portal, possess the chandelier using magic to bring it crashing down opening the door to the chest. Collect the gem.

East of the region, you may find another chest as you enter the portal on the top-left of the screen by interacting the with button nearby (ground-pound as the lion).

Possessing the spiked ball, make your way to the elevator and in the way break the block. You will have now revealed the presence of the chest. Interact with it to collect the gem.

Castle of Lupia
In the room with the giant rotatable cemented wall, transform into the Frog and interact with the ‘+’ symbol in the middle of the square using the tongue ability.

You will need to rotate it by 180 degrees so that the chest at the bottom right of the screen becomes accessible. Move over to open the chest and collect the gem.

The Dark Realm
After learning to fly as the dragon, move through the top right opening in the region to reach the area with the multiple laser lights hindering your path. Transform into the human form and dash through these red laser lights.

Now you will need to make your way through the thick blue laser. Wait for it to go behind the rocks, then dash down quickly and across one final red laser to get to the chest and collect your Legendary Gem.

Skullrock Beach
In the underwater section, left of the abandoned ship, you will come across a maze type puzzle comprising of bows to redirect you while you are battling against strong tides.

Use Frog’s tongue and swing yourself via the bow at the right time to reach the chest and get the gem.

Greenfields
On your way to The Lost Temples, you will come across a level in the Greenfields where you will be required to freeze two fireballs that the flower sends your way, while you are flying as a dragon.

Take care of the evil flower, and then transform into a snake so you land on the frozen fireball to the right and use that as the platform to continue forward. Proceeding to the next room, collect the gem from the chest.

The Dark Realm
Head to the room that will help you regain all abilities when it comes to the transformations.

Now move to the area with the rotatable square and adjust it (with Frog’s tongue at the ‘+’ sign) so you are able to gain access to the passageway on the left.

Fly through the lasers by transforming into the dragon and then to the pig for detecting the portal via sniffing.

You will then need to solve a puzzle that associates a chronological order to each spell you need to perform. If you use a pig, then luckily you can reveal these numbers. Otherwise, have this order in mind:

Now, you will need to perform the corresponding spells and open the chest to collect the final Golden spell.