Modern Warfare 3 Vs. Battlefield 3 – A Matter of Sales and Taste 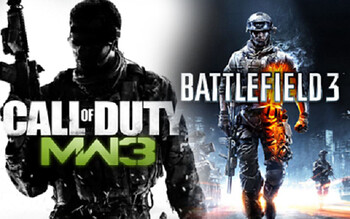 Battlefield 3 is aiming for the first person shooter crown and may win the title as things stand, but most of the analyst believe EA’s premier shooter doesn’t stand a chance against Modern Warfare 3.

While the analysts are playing the prediction game, Activision has released another feature for the huge Call of Duty fan base in the name of Elite social service, which introduces social networking features, more DLC, stat tracking and other features.

While most of the features of Call of Duty Elite will be available for paying subscribers. Analyst and industry people are optimistic that most of the Call of Duty faithful will be willing to pay the extra costs for these extra features when the service is launched alongside Modern Warfare 3.

The opt-in approach is the right one. They had to avoid alienating their core customer, who has come to expect a robust, free multiplayer experience. My guess is $50 – 60 (based on how long a commitment), and I don’t think gamers will be annoyed. I expect them to include 3 map packs and other exclusive content, and nobody will be compelled to subscribe,” Wedbush Securities analyst Michael Pachter told IndustryGamers.

Pachter continued: Ultimately, they will probably offer all older map packs as well. It’s good to keep the brand as sticky as possible, so keeping free multiplayer alongside premium subscription multiplayer is essential.

EEDAR’s Jesse Divnich believes there could be as many as 4 million subscribers to Elite in the first year.

In terms of the services potential, our current surveys and market research indicate that Call of Duty: Elite could achieve 10 to 20% penetration among Call of Duty: Modern Warfare 3 purchasers. This likely translates into about 2 to 4 million subscribers after 12 months and likely 1.5 million subscribers by the end of 2011. We suspect that the subscription price will range in the $4.99 area.

It is critical, however, that CoD MW3 achieves critical acclaim as the bulk of subscribers are likely to come from the core gaming community, where review scores can have incredible influence. While this wouldn’t have been a factor in prior years, as CoD has faced little competition, the release of Battlefield 3 could prove to be a thorn in CoD’s side. If Battlefield 3 outperforms in reviews by a considerable amount (5 points) the core gaming community could shift their annual FPS purchase over to Battlefield 3.

He continued with an example of the same battle between the music titles by the two publishers.

This is no different than Guitar Hero vs. Rock Band, where it was clear that Rock Band was a better game, yet Guitar Hero outsold it 2 to 1. I believe we will likely see the same occur in 2011, where Battlefield 3 will likely be a ‘better’ game, but Call of Duty will still outpace it 2 to 1. However, what is most interesting in the Guitar Hero vs. Rock Band debate is the acceptance and purchases of digital downloads. Simply put, the average Rock Band consumer bought 2.5x more digital content than a Guitar Hero consumer, proving to my theory that the core community drives these digital add-ons.

More important question arise whether the comparatively lesser sales would make an impact on EA. The answer to this is simple, no one sane enough should think, a single game release can severely reduce the market share of Call of Duty games, it would take consistency in quality and time.

But what of the crown of FPS ? we have already referred to many times in the continued debate about these two games. Battlefield 3 would easily win the best shooter award while Modern Warfare 3 remains a cash-cow of Activision atleast for 2011.

Which game should you choose ? it’s rather simple decision and is entirely based on tastes. I will outline the differences between these two games while you should keep in mind, I am rather biased when writing this article. Battlefield 3 has been my long awaited game, I will be upgrading my full rig for the game like most of the people who will opt to buy Battlefield 3.

If you have great PC with great hardware setup, you should go with Battlefield 3, easy decision. Battlefield 3 has dedicated servers, Modern Warfare hasn’t. Most of the Modern Warfare 3 DLCs will be time exclusive Xbox 360, Playstation 3 and then coming late to PCs.
We aren’t sure yet, but you can expect some of the best features of Modern Warfare 3 to be reserved for Call of Duty Elite service.

When it comes to Bobby Kotick, the preferences for the platform is simple. It moves from Xbox 360 to Playstation 3 then finally to PC. It’s just economic decision, no hard feelings.

Battlefield 3 will most likely not have any exclusive DLCs, and they will make their way to all platforms at same time, as has been the case previously.

When it comes to the complexity and possible depth in the multiplayer, gameplay of battlefield has always been complex. Especially, vehicular gameplay and destruction add another dimension to the game. If that’s not enough, you can trust DICE to make the multiplayer experience worth every minute you spend playing.

When it comes to Modern Warfare 3, Activision isn’t type of company that messes around with a successful formula, so you can expect the gameplay to be more of the same, new weapons, new perks, new game modes but the core gameplay elements and how the game plays out remain the same.

Modern Warfare 3 will have small maps and one of the disadvantages of the small maps in a linear gameplay happens to be limited number of choices. Which become very redundant as you play more of the game.

Battlefield 3 multiplayer features complex class system which calls for cooperation between team. You can’t play as a lonewolf, but if you are more of lonewolf, choice is simple, go for Modern Warfare 3.

Another huge difference between the two is the engine, while Modern Warfare 3 is build upon the same old engine and same old formula, Battlefield 3 uses Frostbite 2 to take the game to a whole different level.

Similarly you can find more differences between the two games along the same lines, but in the end, it’s just the matter of taste.