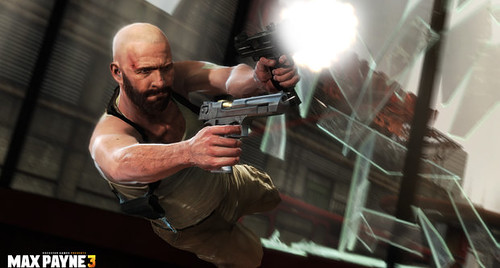 Like its predecessors, Max Payne 3 also has a variety of weapons to choose from. His styling slow-motion segments coupled with the fiery weapons has been the spotlight in the series. The Max Payne 3 weapons used in the game will either be single-wielding or the dual handed (pistols).

Overall, you will be allowed to carry three guns at a time including your primary single handed weapon. Let’s now dissect the arsenal that you will across in Max Payne 3.

PT92
This semi-automatic weapon can commonly be seen on the hands with the members of Commando Sombra, Crachá Preto, and the Tropa Z Factions in Max Payne 3. The weapon is now being used by Max in the game replacing the old usual Beretta.

Desert Eagle
This Israeli gas-operated hand gun is a very popular weapon in many shooting games. The weapon has got higher damage as compared to the other weapons, and you may just love it.

608 Bulls
If you don’t really like pistols, then this high-power revolver (with eight rounds each) can make you feel better. The cowboy feel of the weapon is hard to get rid of.

M1911
The M1911 can arguably be considered as the most common handgun used throughout the world. You will also be using this weapon in Max Payne 3 in both the single-player and the multi-player of the game. You can attach a silencer to reduce its sound.

DE .50
Third generation Full-Auto Glock 17 ate available at several levels at Auto 9mm with one being the starting weapon at start of Chapter 11.

The Glock comes with Glock 18C style compensator ports and a compensated barrel. There is no fire-select mode, and a magazine of 33 rounds.

Glock 17 features a damage same to that of PT92, but a faster fire rate and magazine size. The magazine can be upgraded to hold 42 bullets but magazine.

.38 Revolver
A basic low level revolver gun, mostly found on thugs. First appears in Chapter 2. Model 20 features a higher stopping power than PT92 but has a cartilage of only 6 bullets.

These shorter versions of machine guns with their incredible stopping power and fire rate can be a great source to deal with multiple enemies in close quarter combat.

M10
Known as the Ingram, this small machine pistol can be used in both single and duel modes. It’s stopping being low, but the firing rate compensates for the low damage. You need to be accurate or this weapon can take a complete magazine before taking down an enemy.

Micro 9mm
The SMG looks like a tweaked version of the famous Mini Uzi. The effective range of this gun is just about 100 meters so like other SMGs; you can’t really use it for long-range shooting.

M972
Found relatively uncommon in game, first appearing in Favela levels. The gun has its foregrip and stock removed.

SAF .40
An SMG with a MP5K-PWD style folding stock. A .40 caliber gun which appears in Chapter 13, being a common weapon of UFE paramilitary group.

MPK
The MPK (also known as Heckler & Koch MP5K) is a common SMG used by the gangs in São Paulo. The weapon is larger in size than the other weapons in the same class and can only be wielded in single mode.

The shotguns are always a fun way to express your fury. A bullet or two is usually enough to take out an opponent.

Pump-action shotgun (M500)
You will be able to use the typical pump action styled shotgun in the game. The weapon isn’t that accurate but if the target is quite close to you, you can take him out with a single shot.

Sawn-off Shotgun
If you know its proper use, you can have a great time it. This double-barreled shotgun is quite effective for picking up enemies with single shots. You will have to reload the weapon after every two shots so try not to miss any bullets.

M4 Super 90
It’s another one-shot one-kill semi-automatic weapon. Each magazine carries 12 rounds so you can use it in small rooms and corridors, etc. to get some quick kills.

SPAS-15
SPAS-15 is a modified version of SPAS-12. The shotgun has the typical Pump Action style, and it will let you to take out enemies in a few shots. The weapon, however, is quite heavy, which can affect the mobility of the player.

These weapons are sort of intermediate between the Side Machine Guns and the Light Machine Guns. You can use these rifles to shoot enemies at medium to a long range. Accuracy can be an issue, but if you keep it focused, it can be ignored easily.

Kalashnikov (Ak-47)
The ever reliable AK-47 is back in Max Payne 3. The weapon has been quite high stopping power with a descent fire rate. Accuracy can be a problem, but if you aren’t just showering the bullets, you can control this limitation well.

MD-97 LC
It’s another assault rifle better suited for medium to long-range shooting. You can use this weapon effectively when you want to move from cover to cover, and the enemy is lining up long.

G36
G36 is another common assault rifle commonly used in many shooting games. The weapon has gotten better fire rate than the other weapons, but the stopping power is relatively lower.

FAL
Fal is one of the most common guns found with Brazilian gangsters, policemen and paramilitary units. The weapon has medium range with a bullet capacity of 30.

IMI Gail ARM
The IMI Gail ARM was added in the Painful Memories DLC pack. It has an unlockable red dot sight and features a three round burst shot.

Mini-30
Also used as a sniper, Mini-30 can be found pretty early on in the game, even in the first chapter. The gun as an ammo capacity of 10 bullets.

If you like the stealth style shooting from distance, then snipers are the best weapons you can get. You can blow-off the head of an enemy with a single well placed shot, meters away from the target.

Mini-30
This weapon plays the dual role of the assault as well as the sniper rifle. It has a detachable scope which can be changed depending on the need. The rate of fire of this weapon is higher than the other conventional sniper rifles.

Barrett M107
The M107 is a typical sniper rifle where you usually pick up enemies from single shots. You will have to stay patient though as if you miss too many bullets in haste, your cover can be compromised.

FMP G3S
The rarest rifle in the game, it is found in the hands of ONLY 2 enemies in Chapter 13. It can only be picked up by incapacitating them, making them drop the gun.

IMBLE IA1
The 7.62mm service rifle was added in the DLC Hostage Negotiations, with an unlockable scope.

Rotatory Grenade Launcher
Thus grenade launcher is available in few levels. It has 6 grenade capacity with bad accuracy. The most notable use is during the final chase where player gets to use one with 100 grenade capacity.

As like all grenades, the grenades of the launcher also have flashing lights, making it easier to detect shots.

G9 Grenade Launcher
The launcher was added in the game in Disorderly Conduct DLC.

Found something missing? Contribute away.