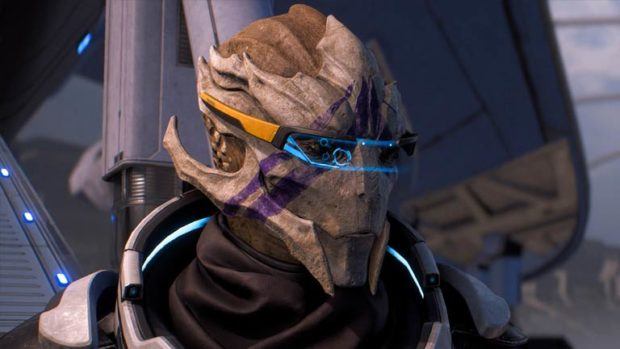 Our Mass Effect Andromeda Vetra Nyx Loyalty Missions Guide will help with all the loyalty missions for Vetra so that you can earn her loyalty.

Completing this loyalty mission not only offers a clear background for our squadmate Vetra but it also offers us another perspective into their character and their personality.

Loyalty missions are an important part of Mass Effect Andromeda as completing these will make sure that your squadmates are efficient in the battlefield and they will trust you.

Means and Ends
This loyalty mission in Mass Effect Andromeda unlocks after the mission debrief aboard the Tempest following obtaining the Kett communication device and returning from Kadara in Chapter 3.

After the prerequisites have been met read the email from Vetra titled “Sid”. Go and speak with Vetra in the supply room.

The two of you call Sid, Vetra’s sister, and discuss an important matter about settlers mission from settlements. Sid wants to rescue them but Vetra wants her to stay on Nexus where she will be safe.

Take the ship to the Remav system, then land on the moon H-047C and bringing Vetra along is recommended. From the landing site on Corytus Plateau, drive the Nomad southwest to the Idriya crater, where you find a lunar base.

Enter the base and then enter the facility. As you enter, you will trigger a trapdoor and you along with your team will be dropped below. Ryder will Press Vetra for an explanation but Vetra does not know anything and Galloway will enter the room.

He admits that Vetra and he used to work for Meriweather and Vetra helped them escape. You need to find a way out of the prison.

Go downstairs and scan the locked door and a mysterious ally will contact you through comms and tells that the door can be opened on their end if you send some power to them.

Go upstairs and scan on the floor until you find the group of cables that aren’t broken. The Cable you require is called “Power Conduit” pick this up and take it downstairs. Use the button to tie in the conduit that powers the door.

The door will open automatically and head to the next room. Hacking the door trips an alarm and you have to hide Galloway and his team.

The mysterious ally warns that if Galloway and his team is spotted they will be killed. Head down the walkway and enter the first room on the right.

Wait there until the timer expires and allow the door to shut. Now, access the security footage on the panel on the right side of the door.

Keep an eye out for the guards, the voice will tell you that if you wait for them to go by, you can catch them off guard.

Take out the enemies and exit the storage and defeat the guards who just passed by on their way into the prison you broke out of.

Once the enemies have been dealt with go back to the storage and talk to Galloway. The mysterious ally is Sid and she was the one who saved Galloway’s group. Vetra will plead Sid to return but she refuses.

Leave the storage room turn right on the catwalk and go up the stairs into the next room. Head through the doorway Sid unlocks across the next catwalk to another locked door.

Use the security monitor to the right of the locked door to peek inside the next room. Here you will have a choice either use the generator to explode and damage some enemies, or open the workshop door in the back of the room to get to some containers with some pretty nice loot. Or you could do nothing.

Push through the mess hall where you will be met with resistance. Defeat them and push forward through the open door at the other end of the mess hall. You will approach a locked menagerie door and to the right of it, there will be a camera.

Enter the room and attack the guards and clear the room. Near the end of the battle, a Fiend will appear, get on the catwalks to limit its mobility. Take out the fiend and exit through the next door. You can either blow the engine, gas the room, disable the Hydra armor, or do nothing.

Gassing the room is recommended, and then open the door just enough to defeat the Hydra from the hallway. Clear the area and reach the open door on the other end of the room.

Sid will go silent, but he replies after a while and suspects that her shuttle has been spotted and goes radio silent.

Tell Vetra the plan is to rush in and help. Go through the next room and take out everyone in your path. Find the security control console and use it to turn the turrets on your side.

The door will unlock, so enter the next chamber and head through the next door and enter the shuttle docking area. Here a cutscene will play in which Meriweather have Sid and has a grenade in her hand. Ask her what she wants and agree to it.

As soon as you drop your weapons shoot Meriweather this will push her back and the grenade will fall. To pull this off, you need to be quick with the command that appears in the lower-right corner. Do this correctly a fight will start and Sid will survive.

Once the battle is over talk to Sid and Sid leaves. No matter how you direct the conversation, the two end up going separate ways, needing time to cool down.

A Moment Planetside
To unlock this loyalty mission in Mass Effect Andromeda you will first have to complete “Means and Ends” mission. You will receive an e-mail from Vetra titled “Kadara”. She says she’s found something on Kadara that she wants to show you.

Go to Kadara and use the Sulfur Springs Forward Station for fast travel. Once there follow the mission marker on top of a boulder overlooking the acid pools.

Talk to Vetra and two of you will go on a rock climbing adventure.

During climbing watch the lower-right corner for the Jump-Jet command prompt. It is probably best to let Vetra win.

That is all for our Mass Effect Andromeda Vetra Nyx Loyalty Missions Guide with tips on how to earn her loyalty.