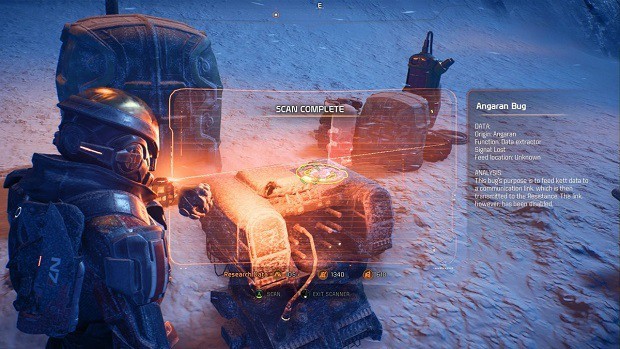 Scanning is back in Mass Effect Andromeda and has received a couple of minor changes. Scanning in the game is divided into two categories i.e. Personal Scanning and Planetary Scanning.

In our Mass Effect Andromeda Scanning Guide, we’ve detailed everything you need to know about planetary & personal scanning.

For more help on Mass Effect Andromeda, check out our Romance & Sex Guide, Side Missions Guide, and Nomad Upgrades Guide.

Personal Scanning in Andromeda is as simple as it can get! You should easily be able to spot a brief prompt on the lower-left of your screen every time there’s something worth-scanning nearby.

Scanning is not only required to complete various tasks & missions but is also required in order to accumulate RD points which are needed to conduct research and craft weapons, armor, augmentations, and upgrades.

Due to this, it’s paramount that you keep your eyes open at all times and scan whenever an opportunity arises.

The game basically allows you to scan a planetary system for possible anomalies by simply moving your cursor around the system. By doing this, you should be able to spot a minor directional arrow on the orange circle.

Now all that remains is to send probes to the anomalies in order to retrieve goods which often comprise of crafting materials, etc.

Below is a list of all the systems where you can go and scan the plants and end up with some nice loot: