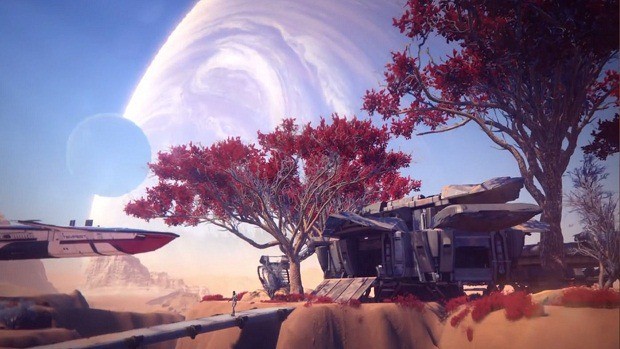 Mass Effect Andromeda Mining Guide to help you learn everything you need to know about Nomad and how to mine resources.

In addition to this, Nomad can also be used to mine resources which are required to craft weapons, armor, upgrades, and augmentations. This guide should help you learn all about Nomad.

In our Mass Effect Andromeda Mining and Nomad Guide, we’ve detailed everything you need to know about using Nomad to mine resources in the game.

Nomad in Mass Effect Andromeda lets you explore the dangerous terrain and is capable of jumping over minor hiccups and launching a speed boost. Apart from this, there’s also a six-wheel drive All-Terrain Mode which essentially lets you scale hills at the cost of speed.

Nomad is Mass Effect Andromeda can be called at any time by activating a Forward Station.

Mining in Mass Effect Andromeda is an important aspect of the game that requires resources. And resources are gathered using Nomad’s mining features. With enough resources, you should be able to develop weapons, armor, upgrades, and augmentations.

Pro Tip: Resources are divided into minerals, biominerals, and tech minerals; but mining only yields minerals.

Before mining, examine the planet to see the kind of minerals you’re most likely to find there.

You can develop new upgrades for Nomad at the Research & Develop Center on the Tempest or other outposts. You need to make sure that you’ve enough research points and resources at your disposal. Some of these upgrades include:

While exploring the galaxy, you’ll come across a whole lot of dangers and environmental hazards. Since exploring and roaming on foot is essentially suicide, it’s recommended that you do so using the Nomad.

However, that is not to say that the Nomad is immune to everything out there. The lack of life support system can deplete Nomad’s shield and eventually damage it. In addition to this, there are animals and enemies who can also dish out crazy amount against it.

When it comes to repairing the damages, the shields recharge automatically over the course of time but the other damages must be repaired at a Forward Station.

This is all we’ve on our Mass Effect Andromeda Mining Tips and Exploration Guide. If there’s anything else you’d like to add, let us know in the comments section below!