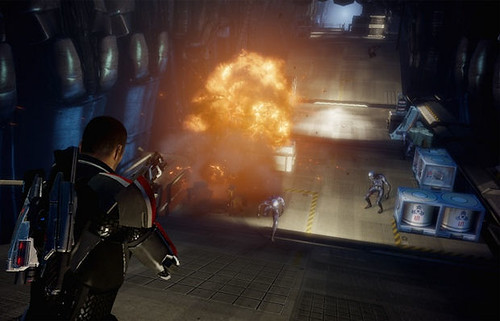 One thing I’ve always loved in Mass Effect is the brilliant amount of available weapons and armor. Okay, maybe it’s not a huge amount in sheer numbers, but it is definitely a quality set of equipment.

The trend continues on in Mass Effect 3, as not only does it contain weapons and armor from the previous two games, but it also adds additional equipment to the arsenal.

What’s even cooler is that BioWare has confirmed that for those of you who just happen to have the ME2 save-game lying around (like myself), the weapons and armor you worked so hard to collect will actually be transferred to ME3 through the save-game, alongside with the obvious other stuff (choices, characters etcetera).

In this guide we’ll go over some of the available weapons and equipment in Mass Effect 3. This may or may not be the final list – we’ll actually have to wait for the game to come out to tell.

For more help on Mass Effect 3, read our Powers and Stat Upgrades, Companions and Troubleshooting Guide.

There will be plenty of Armor types available in Mass Effect 3, including entire sets. Most of the armor from Mass Effect 2 will also make it into to the sequel, alongside other newer ones.

A few Limited Edition armor sets have already been revealed, such as the Reckoning Knight Armor, which will be unlocked by playing the Kingdom of Amalur: Reckoning Demo on EA’s Origin.

Like in the previous ME games, Mass Effect 3 will feature Light, Medium and Heavy Armor types. Heavy Armor will be exclusively available to the Soldier class (after sufficient leveling), while Medium will be available to other class types.

Armor can be upgraded, in terms of their functioning and use of shields, barriers, medigel, and health capacities.

Weapons
Weapons in Mass Effect are categorized in the following manner:

Heavy Pistols:
Heavy Pistols are weapons that are available to all classes in the game. They are relatively slow and mostly suited for medium range, and are especially effective against armor.

However, they are quite ineffective against barriers and shields. Because of this reason, Heavy Pistols are generally treated as backup weapons, in case ammo for the others runs out.

Below is a list of some of the Heavy Pistols that will make it to ME3:

Submachine Guns:
Submachine Guns were introduced first in Mass Effect 2, and since then have served as the primary wielding weapons. They are light-weight weapons with a rapid rate of fire. However, they are much less accurate than pistols because of the excess recoil, and hence are suited best for close to mid-ranged combat.

Sub-machine guns are weak against armor but deal bonus damage to shields and barriers, and hence are preferred as the main weapons for any class type.

Below is a list of some of the Submachine Guns in ME3:

Assault Rifles:
Assault Rifles are fast-firing medium to long-ranged weapons. These weapons are ideal for those classes which provide proficiency in this weapon type. However, they are also quite useful for ranged damage against other weapons as well.

They generally have a slower rate of fire than Submachine Guns, but are much more accurate and have more range.

Below is a list of some of the Assault Rifles in ME3:

Shotguns:
Shotguns are slow firing close-ranged weapons. They become more effective as the target is closer to the player. However, they are almost useless at mid to long range.

Shotguns tend to overheat quickly, and because of that are used as backup weapons when distances become too tight.

Below is a list of some of the Shotguns in ME3:

Sniper Rifles:
Sniper Rifles are slow but hard-hitting extremely long-ranged weapons. The Sniper Rifle is the signature weapon for the Infiltrator class. Due to the powerful but slow nature of Sniper Rifles, they are best used when taking enemies out from a large distance.

Often, it only takes one or two Sniper hits to take down moderate to weak enemies. Sniper Rifles are the only rifle types with a dedicated zoom scope, allowing users to zoom in and take out targets from a distance.

Below is a list of some of the Sniper Rifles in ME3:

Heavy Weapons:
Heavy Weapons are unique weapons that are available to all classes. They hold a specific amount of ammunition in them, and usually deal massive amounts of damage.

In Mass Effect 2, most heavy weapons had to be manufactured within the Normandy at the expense of Elements and other equipment.

Grenades and Mines:
Grenades make a return in Mass Effect 3 but with a slightly different system. Like in Mass Effect 1, there are different types of grenades that can be used with different effects, ranging from cryo to biotic effects.

Omni-Tool and Omni-Blade:
The handy Omni-tool will reappear in Mass Effect 3. However, the Omni-tool is slightly enhanced, and now features an Omni-blade, which is also a holographic extension of the O-tool, but can be used to melee enemies.

Each class will have its own special set of melee attack animations and move with the Omni-blade, ranging from a stabbing motion with the Soldier to a swipe motion for the Sentinel class.

Weapon Modifications:
Weapon Modification reappears in Mass Effect 3. However, this type it is much more versatile, complex and fun. In ME3 the weapons will be highly upgradable as compared to the previous two games, and may enhance weapon damage, scope sights, accuracy, kickback, ammo type, weapon cooling, and improvements in firing speed.

So far, it is only confirmed that all weapon types will be upgradable; there is no confirmation on the upgrading of the Omni-tool or Omni-blade.