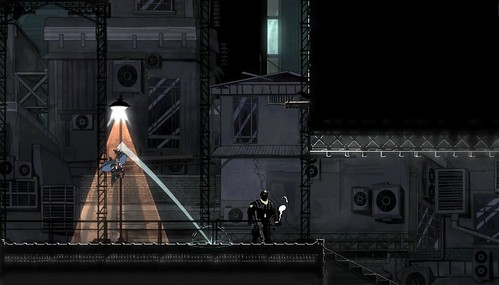 Mark Of The Ninja has scrolls in it, which serve as collectibles during the course of the game. There are three scrolls for each of the twelve levels and the challenge rooms of the game and this Mark Of The Ninja Hidden Scrolls Locations guide will help you find them all.

Follow this guide to find all the hidden scrolls and unlock these two achievements:

Level #1: Scrolls 1-3
Just as soon as you pick up your grappling hook for the first time you will need to swing up to the vent. Once there, you need to go to another vent up to the left. Go through there and in the room, you will find your first scroll.

Once you are instructed to throw a dart at the light to kill the two guards. Jump down head to the door to your left and inside you will find the second scroll above you.

In this level when you are told to sense what’s behind the door instead of going through it, Look for another guard patrolling the room with two lights inside. Kill the guard and the scroll will be at the end of the room.

Level #2 – Scrolls 4-6
You will get your first scroll in this level after you get the firecracker item. When you run into the guard with two doors by him; you are supposed to use a vent to the right and proceed but if you grapple straight up, you will find a gong you can hit.

Once you hit ityou’ll beina secret area where you need tosolve a puzzle. Inthis room, you will find a switch onthe bottom floor and when you press it, itwill release a hatch onthe top level.

After getting the last scroll you will be outside where you have to kill a few guards and dodge a few lights. When you are supposed to go inside of a vent leading you to the 15th floor of the spire, head to the left and kill the guard. You will see the scroll all the way to the left on the second floor.

Right near the exit of the 4th floor of the spire on the ceiling, you should see a vent just to the left of it with one of the fuse boxes you can smash.

Level #3 – Scrolls 7-9
After picking your first locked door, the second floor of that particular building will house your first scroll in this level. You need to pick that lock but watch out for the laser inside. Run in and out as fast as you can.

After getting acquainted with the new enemy with the help of the shield. Hit the gong and you will be in another secret room. Dodge the lights and make your way to the right.

Move up to the right-corner after pulling the lever there. When you get to the top-right corner, flip the switch but do not pull the lever.

Move to the top-left now so you can flip the switch and lever. The scroll should be yours for the taking.

Once you get to the top after climbing the elevator shaft, you should be in an area with four laser systems you have to dodge.

In the middle of the room there is a vent, and you need to go inside it. The scroll is inside a room with two lasers in it. If you have smoke bombs, you can move past the lasers.

Level #4 – Scrolls 10-12
When you are going down a flight of stairs and your companion is following you, you will run into the room with motion sensors and two guards; one of them is shielded. Take them all out and look for the scroll on the bottom left part of the room.

When you are in the room with two motion lasers hit the fuse box and leave the room through the window. Once you do that, immediately jump on the wall outside and start making your way to the top.

There will be another room with two more lasers, but these will kill you if you touch them. Dodge past them and go into the vent on the bottom on the floor to find the scroll.

When you are in the room with the huge chandelier, there is a vent on the left of the room. Go inside, hit the gong and move to the secret area. All you have to do is avoid the lasers while flipping switches to help open up your path. The scroll is up at the top.

Level #5 – Scrolls 13-15
Once you get to the hallway full of motion lasers and a guard at the very end, behind the guard is a vent leading you to a gong and subsequently, a secret room.

After Karajan has taken the elevator up, you will need to go through the elevator shaft into a room with lasers. On the left top-side of the area is the scroll. The laser guarding it follows a pattern so time your run to the scroll accordingly and do it fast.

The third scroll in this level is located in the area where you are trying to kill captain Kelly. You will need to go to a small rope with a fuse-box to open a door.

Don’t go in through the door as it will shut behind you instead go up into one of the three vents above you in that area where the last scroll is in this area. There are a few lasers to dodge, but that will be easy to you by now.

Level #6 – Scrolls 16-18
In this level when you are on a roof next to a tall tree, scale the tree and hop on to the roof on the left. Kill the guard with a searchlight and keep heading left, and you will find a vent to go under. The scroll will be next to the box that is blocking access from below.

Jump down from where the box was blocking, and you will find another box to the left. Shift that block to the right to block the lasers that are shooting up. Take the box to the right and put it next to the other one. Use them to jump up to the scroll.

Once in the catacombs when you have made your way to the ledge with an artifact on its other side. Head to the left and there, you will find another vent leading you to another gong and a secret room.

The best way to solve the puzzle in this secret room and take your scroll is to swing from the ledge to ledge and hang-off them to throw darts at the fuse boxes.

Level #7 – Scrolls 19-21
You’ll come across an area with two tombs; you must push over to go inside the bottom of them. The first one you take to continue with the story, and the second will have the scroll underneath it.

In this level when you are told to ride one of the boxes all the way to the top, instead of doing that, go up by yourself. The third enemy to the left will have a vent behind him, which will lead you to a ……you guessed it, another gong and another secret room.

In this puzzle, you need to ride the box while avoiding the lasers to reach the scroll. The third scroll can be found in a room with two boxes and three levers. In the top right corner, you’ll find an entry point for the scroll. Grapple across the room to find the scroll.

Level #8 – Scrolls 22-24
After meeting with your first elite soldier you will run into a staircase. Underneath the staircase is a vent that leads to a few guards and two elite soldiers. After dealing with them go through another vent on the left to grab a scroll.

When you have to find a banner that can upgrade your equipment pass that there is vent, a gong and a secret room. This one requires you to use dead soldier bodies to get past the guards. Make sure to take them all with you on the way down.

At the very end of the level, you are supposed to grapple up and move a box over to go into the next room. Go down below the small bridge, and take the vent down leading to the last scroll for this level.

Level #9 – Scrolls 25-27
When you start this level, there will be a hallway with lasers that will instantly kill you if you touch them. Go to the next room and head up a vent.

Once inside, move the box a little to the left, that way it isn’t blocking the vent below it. Go back down to that hallway, grapple up quickly and grab the scroll to the left.

After getting the key card there will be a blue door you can open. Go to the top right corner and you will see a vent leading to another secret room. Pull the levers to avoid the lasers, and the scroll is yours.

This last scroll is at the top left corner of the map. You’ll see a sleeping dog in the room; go out on the balcony to the left and climb up to find the scroll.

Level #10 – Scrolls 28-30
One you get past the room with hanging bombs, lok for a small cave full of traps underneath the floor of the next room. Avoid the knives that are thrown at you when you break the chains and the scroll is yours.

After grabbing the tattoo artist head to the next building to the right. Head down to the tunnels in that building and on the second floor, you will find a vent on the ledge on the top-left. There is a gong there leading you to a secret area with levers. Avoid the knives and grab the scroll.

In the top area, between grabbing the tattoo tools and jailer, there is a room you can jump into that has two guards and two sleeping dogs. Once you have dealt with them; you can grab the scroll to the left.

Level #11 – Scrolls 31-33
The room with the two stalker has a scroll in it on the top left corner. Be warned stalkers are very dangerous, so set-off the pot in the middle that is booby trapped, and they’ll come running down to see what the noise was.

When you come to the path of the hills, you can jump down the small bridge in front of you. It will lead you to the challenge room containing the scroll.

Right after you get the second scroll, you’ll jump down to a cave area. Look for the scroll up above the first stalker on the first ledge.

Level #12 – Scrolls 34-36
During the second sub-area when you see the yellow rectangle on the map, head to the right. You’ll have to get close on this as you need the light of the rail-cart to open the path for you.

Fall down to the vent before you get run over, and visit the last challenge room. Use your Mark of Serenity to get past the lasers and pull the switch. The light is your friend here.

When you come across a guard at the exit, kill him and head up the flight of stairs leading to a vent on the second pair and look for the scroll inside.

When you reach the top of the stairs mentioned above instead of going to the building on the right, go all the way up to the left.

At the top part of the building there will be a vent on either side where you can take the last scroll of the game.