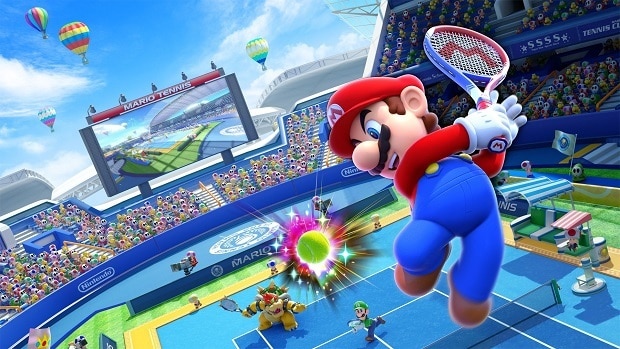 Nintendo Switch users were treated to the perfect tennis game, though with the iconic Nintendo created characters in Mario Tennis Aces. There are a ton of fun mechanics and features that you could get used to, so let us help you in that regard with our Mario Tennis Aces Guide.

On the surface, it may seem like any other tennis game but do not be fooled! There are some cool features that may not be utilized by many players but could seal the deal when it comes to victory. Playing characters from Mario’s world, the Mushroom Cloud, you will have the different type of shots that you can execute with your racket.

The trick shot is more about showmanship than actually improving your chances of winning. It is like a taunt or when you are feeling so confident in a match that you decide to annoy the opponent by this particular shot. Though, interestingly enough, some counters can only be performed with trick shots because of their long range.

Some shots can be countered or returned with what the game calls ‘Zone’ shots. These opportunities occur occasionally and are indicated by stars on a particular position on the court.

Moving your character over these stars and then hitting the ‘R’ shoulder button will send out a powerful, accurate-to-the-inch, and quick shot that is controlled by the analog or motion controls.

The advantage or disadvantage, if you are on the receiving end, of the Zone Shot, is that rackets that counter this shot will lose durability.

Therefore, returning these type of shots three times will result in a normal racket being damaged to point of becoming completely obsolete and thus you will lose the match by default.

You can, however, press the ‘B’ button to return these shots without causing any damage to the racket. This allows you to close the distance using the Zone Speed at the expense of your Energy.

Do note that this will take some precise timing and the correct position. If you are not up to the difficult task of timing you are blocking, then just let the zone shots go. After all, it is better to lose a point rather than having your racket damaged.

Special Shots are powerful quick shots that will consume a lot of the ‘Energy’ bar. Always save these for when you are on a large lead over the opponent or when you are on the brink of damaging your racket completely. These can be returned in the same way as the Zone Shots i.e. by utilizing some of the Energy to perform the return with Zone Speed.

For situations when you would want to play mind games with the opponent, you can use the Drop Shots. These are a special kind of shots which will bounce very little once they hit the ground so that the opponent may not even get the time to charge and return the shot. The best way to utilize is to get the normal rally going, then switching up the tempo with a Drop Shot.

There are three main modes in the game: Adventure, Tournament, and Free Play.

The Adventure Mode is the cinematic Story Mode that acts like a tutorial allowing newcomers to get acquainted with the mechanics of the tennis game.

You will come across many challenges that will aim to improve the accuracy of your serves, your ability to move better on the court, and timing the block on the Special Shots.

The Tournament is also a singleplayer mode where you will have to win matches against the CPU until you bring home the Championship Trophy. This is great if you are looking for something competitive before rolling into the Multiplayer Mode.

Free Play Modes will pit you against local 4-player mode or a 2-player online mode. This is what you have been really working for as your every skill comes into play.

A human opponent is much more difficult to read and to fool, so you will need to play many matches before you could set a firm hand on that racket of ours.

You can pick between 15 different characters to play as outside of Adventure Mode. Each character is unique in terms of personality and playstyle. For example, Mario is an all-rounder while Waluigi has a better defense.

The best way to know which character suits your playstyle is to test all of them out. Try to learn each character’s strengths and weaknesses so that you can use them to your advantage later

The various stages of the game also offer some dynamic opportunities which keep the game interesting and mean you should never lose focus even for an instant. Examples include a stage where you have the Piranha Plant that could eat and throw the ball away at you with the same pace.

Another one is where Mirrows absorb the color of the ball and return it in a different color. Presence of these obstacles presents exciting opportunities and brings more fun to the overall experience.

This is all we have in our Mario Tennis Aces Guide. If there is anything else that you would like to add, let us know in the comments section below!