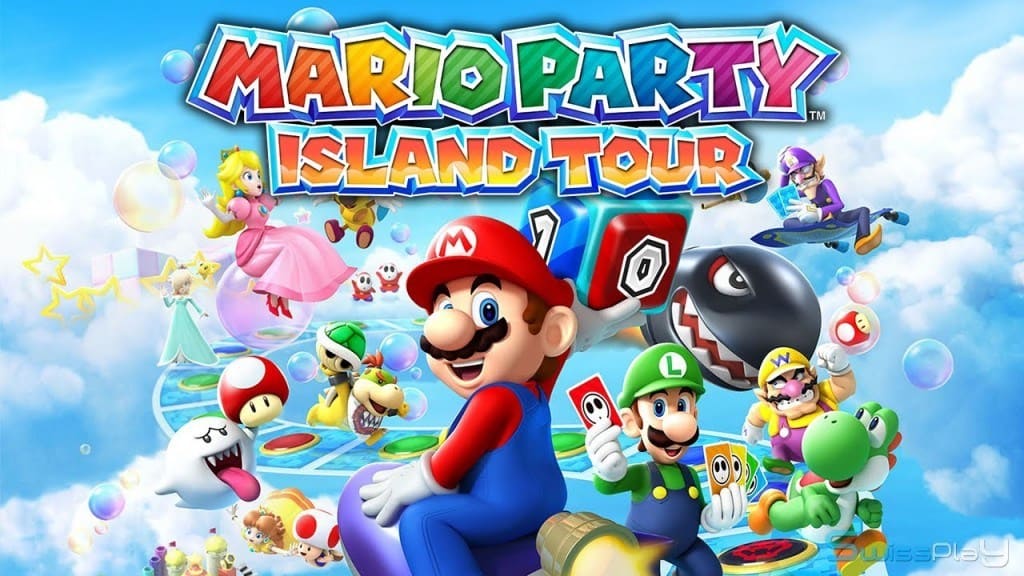 This board has a completion time of 45-60 minutes and is 50 spaces long from start to finish. It’s a fairly straight forward board which is also used in tutorial sequences.

Details and Objective
It relies 4/5 on skill, 3/5 on luck and 5/5 on mini games and the main objective is to simply reach the end of the board.

Minigames
This board has mini games which will begin at round 2 from where every turn begins with a mini game. These mini games determine who gets which Bonus Dice Block.

Strategy
It consists of a challenge area which is around 10 spaces from the start. You’ll be greeted there with three switches to hit. You need to hit one of these to lower the draw bridge, but it is unknown which one lowers it so it’s dependant on luck.

Note: Pressing the wrong switch will make you stop so it’s good to save up some movement speed boosting items for here, just in case.

The 13th and 4th spaces have a ‘?’ which can give you access to the cannon, to shoot you quite a distance ahead of the competition.
At around the 25th space you’ll encounter the Branch Area which will either send you into the Bowser Zone or through the main path at random.

The Bowser Zone can be summarized as a seven space detour back into the main course with a couple of Piranha Plants, Bowser along the way.

At the 35th space you’ll encounter a red “?” it is currently unknown what effect it causes but it is safe to assume that it’s bad that since it gives you a warning against awakening the chain chomp.

That’s most of what there is to this path, other than this it’s pretty straight forward.

Details and Objective
This board is a relatively short board consisting of 15 spaces and its completion time is around 15-30 minutes and as the previous board, its main objective is to reach the end.

The board relies very little on skill (1/5) and is mostly dependant on luck and mini games, 5/5 and 4/5 respectively.

Minigames
This board will toss mini games at you after approximately every three turns, players will receive a movement speed boost depending on how well they do in this mini game.

Strategy
In this board, the Dice Blocks have numbers ranging from 1-5 instead of the traditional 1-6. The 6th space in this board is replaced with a Banzai Bill, if anyone gets this then a Banzai Bill will appear to wreak havoc on either the lower or the upper halves of the area.

Whoever gets hit by Banzai Bill have to go back to the starting point or the halfway point if they’ve past it.

You can avoid this by landing right on the “?” switch at the half way point or by reaching any of the blue spaced caverns. That covers up most of what there is to this board, not much else since it is quite short and caps at 15 spaces.

Details and Objective
This board consists of approximately 38 spaces and has a completion time of around 30-50 minutes. The board is dependant 4/5 on skill, 4/5 on luck and 3/5 on mini-games.

Note: The totals are calculated after everyone reaches the goal so you still have the chance catch up if you ever fall behind

Minigames
There aren’t many mini games in this map other than in the case of Duel Spaces. In this instance players can get an extra amount of mini stars, first gets 3, second gets 2, third gets 1 and fourth gets nothing. These are doubled after a certain passing point into 6, 4 2 and 0 respectively.

Strategy
The board starts out with toad pointing towards the next star stage. These are points that you reach along the path where four characters will be giving you the good Mini-Stars and Bad Mini-Ztars. The path to the first star stage is fairly straightforward so nothing special to mention about it.

You’ll encounter a fork as you move towards the 12th space. There are two ways to go from here, the northern path is one space longer but has a higher chance of getting a switch place space. The other path is shorter and both of these meet up at the 15th space.

You activate another fork as you move towards the 20th space Here, the path is longer to the north by one space, the path north is longer while the path south is shorter and gives two consecutive spaces to alter mini star order. These two paths meet up again at the 24th space.

After this there is the final segment, the bonuses for the duel space mini games are double when you reach this place and you will be notified as such.

There will be another for at the 30th space, the eastern path here is longer but is likely to alter the mini star order while the western path is shorter. You’ll encounter the final star stage at the 37th space.

Details and Objective
This board is another one of the relatively shorter boards of the game. It has a completion time of 10 – 20 minutes and consists of 20 spaces from start to finish. Its main objective is the traditional get to the end as fast as possible.

Minigames
Mini games in this board will begin at round 4 and are held every 3 rounds. These mini games, along with dual spaces also grant boosters which increase the distance you travel.

Strategy
1st place gets three boosters, 2nd gets two, 3rd gets one and fourth gets nothing. As for the duel spaces, everyone contributes a booster and the winner takes it all.

This board features a different Dice Block than the other boards. The Dice Block of this board can roll anything from 0-5 instead of the regular 1-6. Keep in mind that you will do absolutely nothing if you roll a zero, even if you use a booster.

The board is fairly linear, the key things to note are that the spaces 13 and 14 are booster spaces and the spaces 15 and 16 are duel spaces. These duel spaces can earn you up to 3 additional boosters.

The rest of the board is fairly straightforward so that’s all there is to it.

Details and Objective
This board has a completion time varying from 20 – 40 minutes and is mostly reliant on skill (4/5) while having little reliance on luck (1/5) and has a 3/5 reliance on mini-games.

This is another board featuring the traditional objective by getting to the goal as fast as possible but there’s a slight twist that requires you to reach the goal on an exact roll.

Minigames
This board tosses mini-games at you after each turn and the rewards for these mini-games are cards which are alternates to Dice Blocks.

Strategy
Through the second half of the game, special bonus card mini-games appear which have much more significant rewards as well as determining the turn order for the next turn.

The board features three types of magic cards, these are:

The turn order is re-determined through usual means and you get to keep your cards, you are given more if the number of cards you have is less than three. The path to the west has a lot of back spaces while the path to the east has a lot of dash spaces and a Piranha plant here and there.

Details and Objective
This board has a length of 35 spaces from start to finish and has a completion time of 20 – 40 minutes. The objective of this board is a complete opposite of what you’re supposed to do because in this board you have to get to the end the slowest instead of the fastest. It relies 2/5 on skill, 3/5 on luck and 4/5 on mini-games.

This board isn’t initially available and is unlocked by playing all other boards except Shy Guy’s Shuffle City at least once.

Minigames
This board offers mini-games after each round, these mini-games determine the order in which everyone moves and secondly they determine what Dice Block everyone gets.

Strategy
The board is quite difficult as you start out due to the numerous dash spaces scattered around it, while these may seem difficult at first, they eventually die down through the mid-game.

Other than these dash spaces, there’s not much that the board has to offer, there’s a “?” on space 9 which will warp you backwards and another one on space 18 which swap places with another player.

After these ‘?’ spaces there’s nothing special up until the 33rd space which gives you a chance to warp back before fighting Bowser for your life.

That’s all there is to this board, the winner is determined by whoever is the farthest when the game ends.

Share your own tips and strategies with us in the Comments Section below!