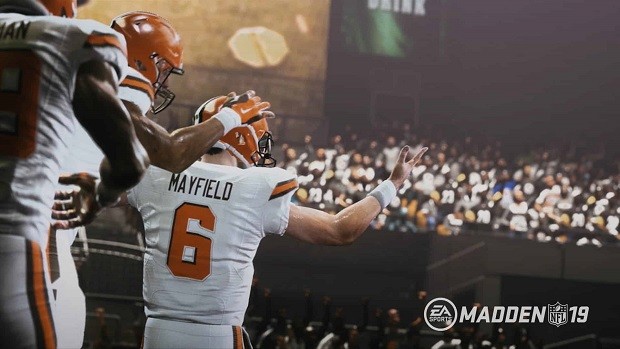 EA Sports’ long-running American Football game series is back with Madden NFL 19 and with it the Story Mode, Longshot that we got in last year’s edition. With an emphasis on choice and consequences, the player can experience one of the multiple endings depending on his decisions throughout the course of the game. See if you can get all of the possible Madden NFL 19 Longshot Endings.

The Longshot’s story continues to follow our protagonists Devin and Colt but in a new sense with Longshot 2: Homecoming. This time around, the action is on both sides of the field, on and off.

There’s a fresh new start to the canon, where we get Devin Cole playing on Cowboys team while Colt Cruise is just starting out his career in music which is off to a great start.

These endings involve different fates for our returning and new characters in Longshot 2.

Coach Jamison, by the end, bites the dust and is honored by the construction of a new stadium in Mathis for the Bullfrogs.

Loretta Cruise realizes the value of her connections to the family and as a result, she continues to join the family in their weekly Bass playing sessions.

For Geese Guzman, he’s given the job to head the project of building the stadium at Mathis and a statue in honor of Coach Jamison.

Earl Coates serves as a spiritual mentor for Mathis Quarterback while Donnie Marks opens up as service for supplying fitness drinks to children.

Carlos Guzman also opens up a platform aimed at helping people follow their goals to head starting a business venture.

Devin Wade may even leave his team, the Cowboys to join up with the Texans. He can also face off against Tom Brady in a match and has the chance to defeat him.

Colt Cruise, the hero, pivots from his musical career into a coach for Mathis Bullfrogs football team. He moves back to his hometown to be closer to his children. Even though he has the potential to coach at NFL level, he gives it up to be together with his family again.

Madden 19 NFL – What’s Next?
After you are done with the game, there are a total of 2 different things that you can do as a reward. Remember that this is not a choice and you can do both of these continuations of the mode simultaneously.

If you want to continue playing as Devin Wade, you can move on to the Franchise Mode and play either as only Devin Wade or as a coach/owner of his team.

If you do not want to continue playing as Devin Wade or are interested in looking at how Colt is doing after his story ends in Longshot 2, you can use him in the Madden Ultimate Team Mode.

This is an online mode which will grant you the player card of the aforementioned player as well as a host of other rewards which will help you get an edge on the rest of the opposition.

Since the teams near the release of the game are not nearly as strong as they end up being, using the Longshot Mode is a great way for you to have a lot of different players of high quality in your team and get a head start so that you can snowball your squad