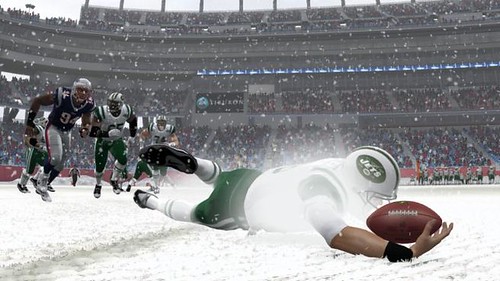 Football is back. Though you could rejoice it with Madden NFL 12 but nothing is like watching a live game, is it ? Madden NFL 12 is quickly approaching us and EA Sports along with ESPN have been busy sharing the player ratings.

Last week, we shared the top-rated rookie players in Madden NFL 12, now it’s time to unveil the very best in the Madden.

So who are they ? find out below as we list down the top five players at every position; be it quarterbacks, running backs, wide receivers, or defensive ends.

Quarter Back (QB) is the captain of all things offensive. He throws the ball, hands off the ball, runs the ball, literally runs the offense of the team.

Running back is used primarily for the running plays, though he can also block.

When Quarter Back throws the ball, Wide Receivers of different types receive it. They are the primary receivers of the ball thrown by Quarter Backs, so very important in your offense play.

Defensive Ends are your tacklers. They block the passes, close holes and blitz.

Linebackers play the defensive role in both run and pass defense. They are a defensive version of tight end.

We will update this list with top rated players at remaining position as soon as EA/ESPN reveals them. Check back again.