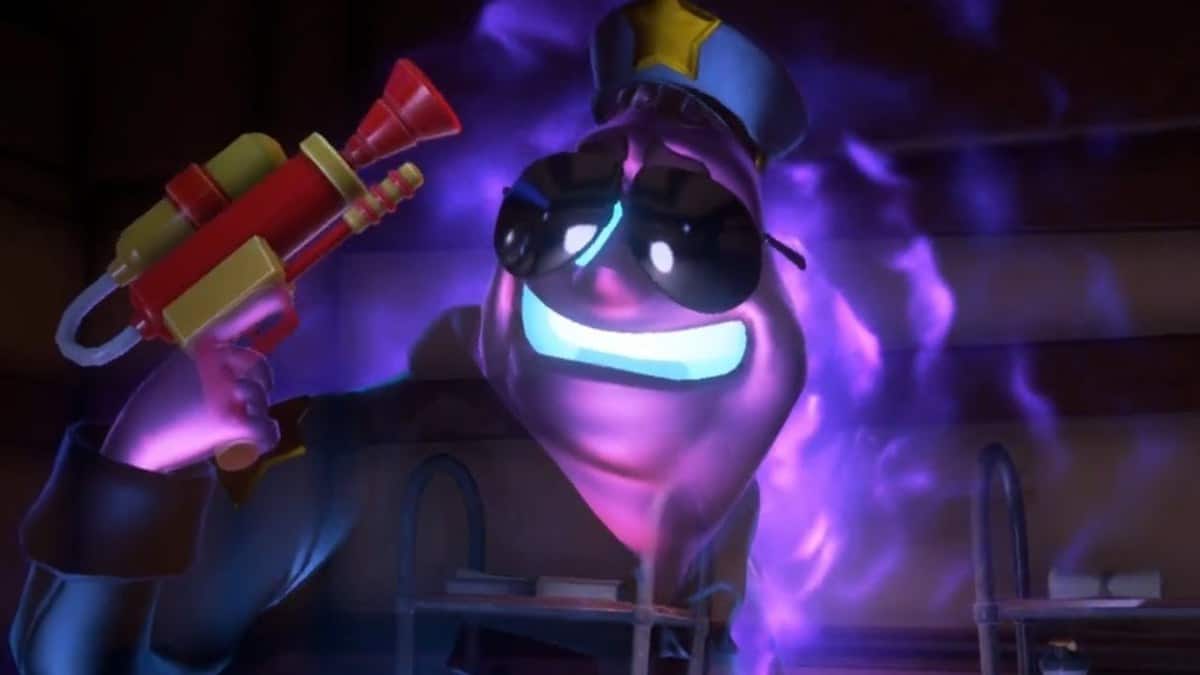 The 3F boss you’ll face in Luigi’s Mansion 3 – Kruller the Security Guard is quite an interesting one. With his hip shades, no-nonsense demeanor, and a propensity to bust any trespassers, Kruller’s the type of guard who’s had one too many donuts but regardless of that, he takes his job very seriously!

All things considered, Kruller isn’t a particularly difficult boss. The key to beating him is essentially making full use of Gooigi – your Green clone will be the one to help you take down Kruller. Use him effectively and the battle will be a cinch; don’t use him at all and the fight is downright impossible.

Kruller’s weapon of choice is a water pistol and will sequester himself behind a fenced door. Use Gooigi to get through the fence and starting chasing Kruller, a ghost with 250 HP. Kruller’s water gun may prove itself to be Gooigi’s worst nightmare… it’s capable of completely melting him away. Before sending Gooigi into the fenced room, have Luigi hide behind Kruller’s desk, so that he doesn’t get mixed in the crosshairs.

You’ll need to blind Kruller with the flashlight, however, his sunglasses will prove themselves to be quite the hindrance. Use the vacuum to get them off his face, though this may take some time; just keep at it until they’re gone (he will get new ones eventually so be sure to act quickly after getting them off).

Firing any projectiles at Kruller won’t do you any good as he’ll just bounce them off with his blubbery gut. Once Kruller’s sunglasses are off, he’ll make desperate attempts to roll away from you, just making a general effort to keep his distance from you as he looks for another pair of glasses. You’re attempting to get close to him to stun him with your flashlight.

Once you’ve got him stunned, use the vacuum to slam him onto the ground. That’ll do a considerable amount of damage, though you’ll have to do it a few more times to take him down for good. That’s all there is to it!

To reiterate: send Gooigi after him, avoid all his water pistol shots, use the vacuum to get his sunglasses off, chase after him and use the flashlight to stun him, and slam him onto the ground whenever you get the chance. Simple, though there is an element of challenge, I can’t see anyone having trouble overcoming it, especially when you have this guide to help you out.