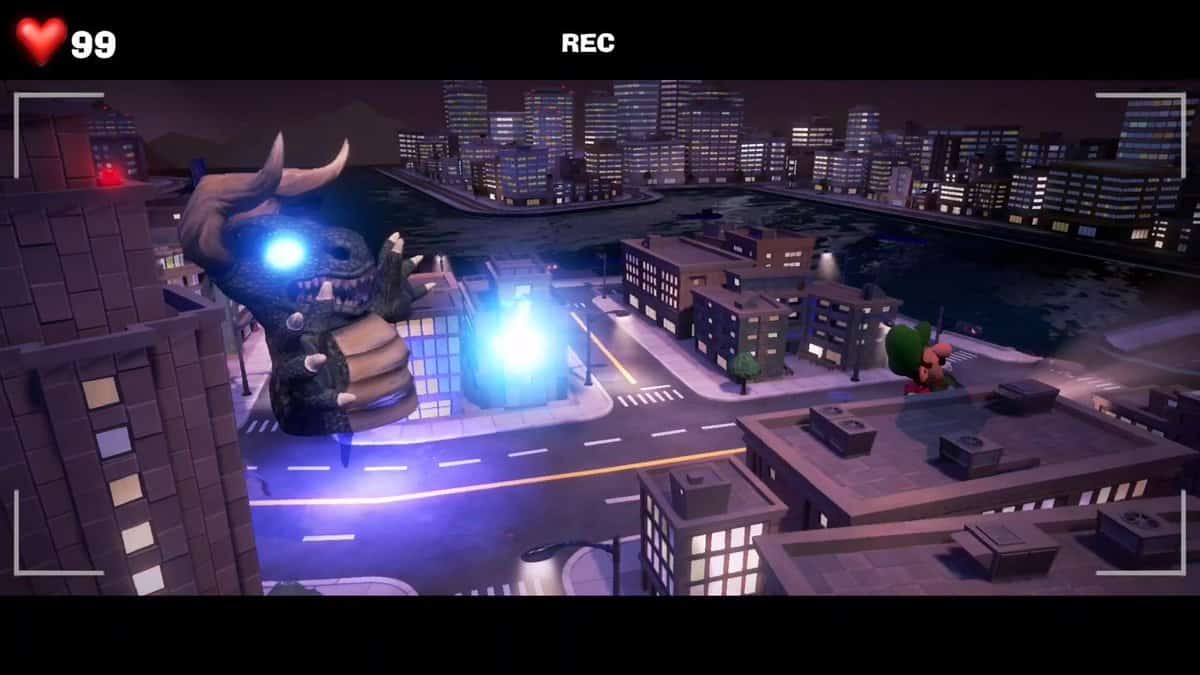 In the Paranormal Productions studio of Luigi’s Mansion 3, you’re going to be regaled with all sorts of cinematic memorabilia, references, comical jabs at film stereotypes, and… the ghost of a Toho inspired monster. The Kaiju boss of this level – a Godzilla inspired Ghost – will put up quite a fight, but this Luigi’s Mansion 3 guide will help you deal with it swiftly and efficiently.

You’ll be able to confront the creature after finding and handing over the red megaphone to the ghostly director. After doing so, you’ll be escorted to a miniature set of a city, reminiscent of the sets used for the Toho Kaiju films. Here, you’ll come face-to-face with a ghost donning a Kaiju outfit.

The fun thing about this set piece is that the environment can be destroyed. All the miniature buildings and edifices are destructible, and can actually be used to aid you in combat.

The Kaiju has several attacks, all distinguished from one another through unique visual cues. The most basic attack is when the Kaiju swipes its claws at you; it’ll only do so when Luigi invades its personal space – keep your distance, there’s no need for you to get close.

At the start of the battle, the game will give you a very strong hint as to how to proceed with the battle. The Kaiju will shoot out a blue orb, it will do considerable damage if it hits you. Use your vacuum to push it back towards the Kaiju, who will retaliate by blowing air at the orb. The first orb will hit the Kaiju, but all subsequent orbs may prove to be a challenge.

If you see the Kaiju’s eyes glow orange, he is getting ready to spit out fireballs; just a single hit will take a sizable chunk out of your total HP. Use the miniature buildings as cover or simply run around and dodge the attacks.

When the Kaiju’s eyes glow green, that’s when you have to be ready for combat. It will send out an orb similar to the one at the start of the battle. However, unlike that first time, using your vacuum to blow it towards the Kaiju will not work; the Kaiju’s breath is too strong and it will prove too great, even for your vacuum. Eventually, it will reach you.

The way to combat this is to call forth your double/clone and have him use its vacuum in tandem. The power of both your vacuums will push the orb back and will ultimately hit the Kaiju. You’ll need to repeat this process a few times before you get to the grand finale. In the meanwhile, make sure you don’t get too close or get hit by any of its fireballs.

At the very end of the confrontation, the Kaiju will make a last-ditch effort. The final orb it shoots out will determine the victor. Using the same tactic as before, you’ll need to vacuum with all your might – you’ll be prompted to press the ‘A’ button repeatedly to push the orb back and take the Kaiju down.

However, as would be expected from the film studio, there is a twist! The Kaiju suit is knocked off, and now you have to beat the ghost underneath. Don’t worry, this is an exceptionally easier task. Make sure not to get hit by the game and use your vacuum to suck it up and knock it out for good!