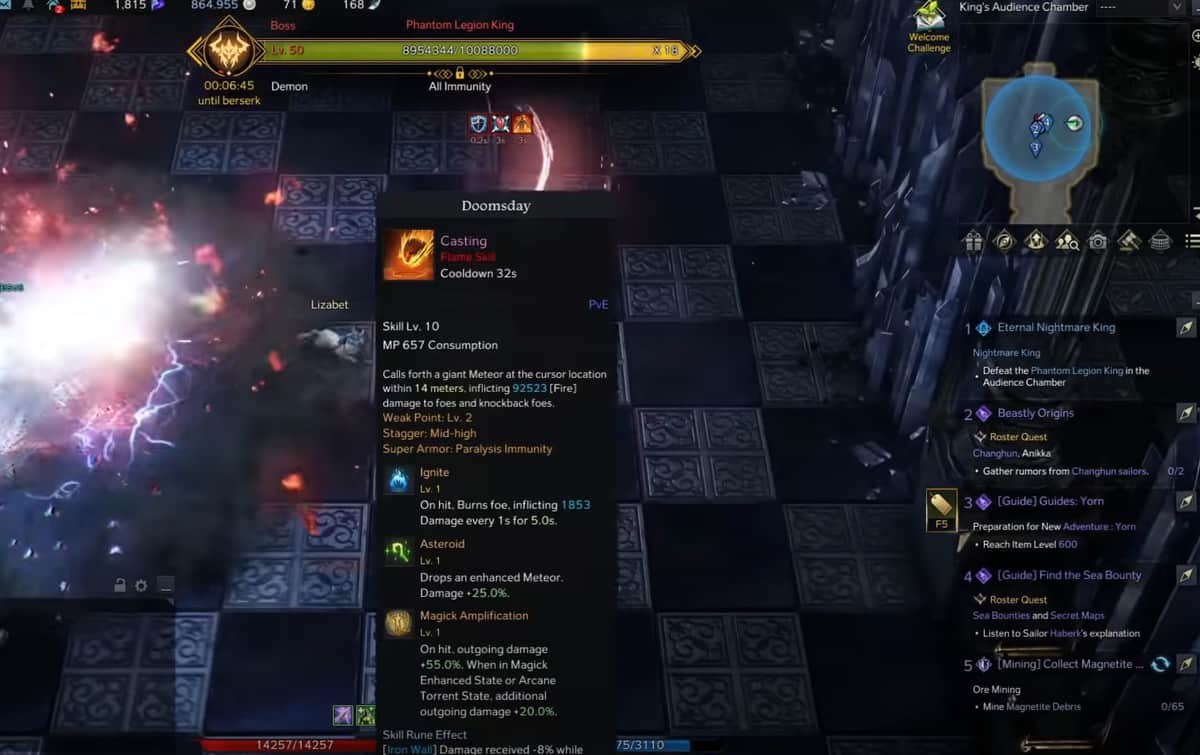 To help you out with completing the “Hall of the Twisted Warlord” Abyss Dungeon in Lost Ark, we’ve prepared this guide where we’ll be showing you the easiest way to beat this dungeon.

After you complete the Waiting and Leaving quest in the Northern Vern region (from the Blue World storyline), you’ll unlock Abyss Dungeons in Lost Ark.

Hall of the Twisted Warlord is an Abyss Dungeon in Lost Ark that requires your character to be level 50 with an item level of 460. It is the first 460 item-level dungeon in the game.

To access this dungeon, you can either go up to the shrine in the main city or simply just use the group finder. The dungeon is located in the Phantom Palace.

Before we jump into any details about this dungeon, you need to note that the Hall of the Twisted Warlord dungeon requires to be in a party of 4 players. So you need to team up with your friends before you can conquer this dungeon.

You’ll encounter two boss fights in the Hall of the Twisted Warlord dungeon in Lost Ark. Below, we’ll walk you through the exact strategy you need to win against each boss in the dungeon easily.

In the first boss fight of the dungeon, you’ll actually be going up against two bosses at once. These two bosses are the Legion Rook and Legion Bishop, and they have some very interesting mechanics that you need to know before you begin fighting them.

The first mechanic you need to know about these bosses is that if one of the bosses dies, the other one will go into an enraged mode, becoming much more powerful.

The second mechanic you need to know is their party wipe mechanic. A few moments after you start the boss fight, you’ll notice on your mini-map that you and your teammates have a blue aura around them.

However, one of your teammates will not have such an aura. Therefore, the Legion Rook will target the person who does not have a blue aura.

The Legion Rook will launch a projectile towards said player, which has the power to wipe out the party. To make life even more miserable for the player, the blue aura of the other players will push them around as they try to dodge the projectile.

This projectile will be fired out twice during this boss fight. When the Rook fires it out for the second time, the Bishop will surround itself with Towers to become safeguarded.

How to Defeat Legion Rook and Legion Bishop

Now that you know all of the mechanics of the first set of bosses, let’s go over the strategy you need to use to take them down.

Because of their first mechanic, killing one boss makes the other enraged. The most important thing you need to do throughout this fight is to try and kill the bosses at (nearly) the same time.

If you focus on a single boss at a time and kill it early on, this will leave you fighting against an enraged boss for a painfully long time.

But if you try to deal equal damage to both bosses during the fight, eventually taking them down at (nearly) the same time, you won’t have to deal with their enraged mode at all.

The key for this fight are big AoE attacks. You need to group both bosses in the middle of the arena and blast them with AoE attacks to deal equal damage.

When you get a message from Azena, it’ll indicate that the Legion Rook’s party wipe mechanic is incoming. Countering this mechanic is surprisingly simple.

When the projectiles are fired out, the Bishop will stand in the middle of the arena while the Rook will run away to a corner.

You need to have the targeted player stand in line with the Rook and the Bishop. If the player does so properly, the projectile will hit the Bishop instead of the player, dealing great damage.

Ensure that the other three players are standing far away from the targeted players so their auras don’t push them off of their position.

When this mechanic is triggered for the second time, the Bishop will be surrounded by towers. Make sure to immediately take down the towers so you can use the same strategy again.

When you bring the Phantom Legion King down to x15 and x5 health bars, respectively, it will move to the middle of the arena and spawn 4 Phantom Swords.

Each Phantom Sword will target a single player. When a player touches a sword, the entire team will get a stackable status effect that lasts for 2 seconds. If this status effect stacks twice on the team, the whole team will be wiped.

But that’s not all. As this is happening, the Legion King will present a stagger check while it charges up a great attack. If you’re unable to clear the stagger check, the party will be wiped.

How to Defeat Phantom Legion King

When you get the Legion King to x15 and x5 health bars, respectively, it’ll send out 4 Phantom Swords for its party wipe mechanic.

Only two have to be taken out of the four swords to avoid getting wiped. After taking the two swords, use any skill with high Stagger to quickly stagger the boss.

When the swords are sent out for the second time, you don’t need to do anything different. Follow the same strategy and you’ll easily take down the Legion King.

You’ll receive the following rewards once you complete the Hall of the Twisted Warlord Abyss Dungeon.