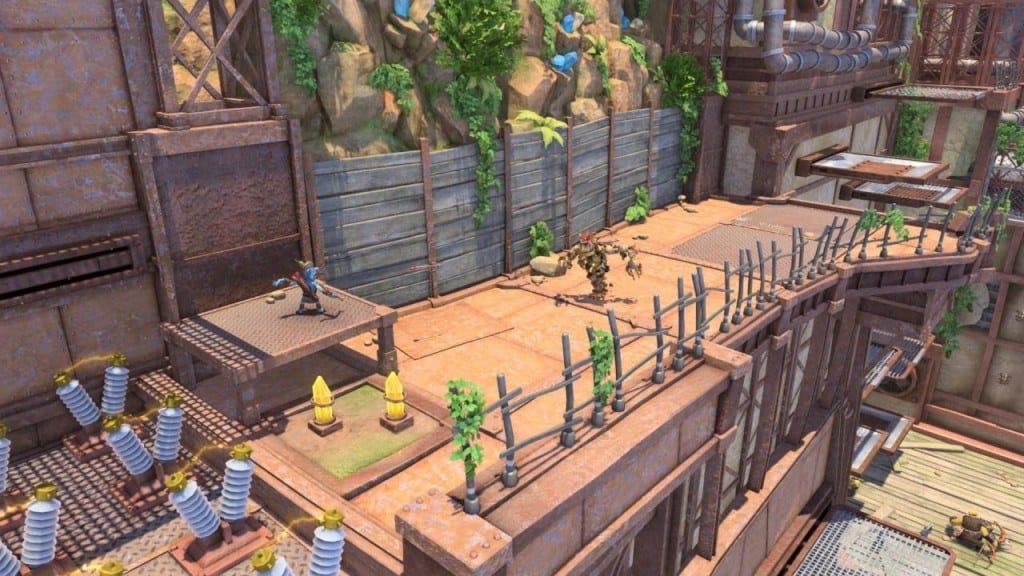 Time Attack can be unlocked by beating the game on any difficulty setting.

After completing the game, the mode can be accessed under the ‘Extra Content’ menu. There are a total of 13 Time Attack stages and in this guide, I will be covering basic tips and strategies to help you attain Five Stars in each of the stages.

Time Attack Stage #1
In order to receive 5-star rating on this chapter, you will need to get a multi-kill using a Super Power and must not take damage.

Before entering the parking lot, you will come across three gigantic robots on whom you would be able to use a Super Power and get a multi-kill. As for the damage, the whole chapter is pretty straight forward, you just need to make sure that you don’t get hit by the cars that robots throws at you.

Time Attack Stage #2
Just as the chapter starts, make sure to evade all the bugs by either jumping before they explode or using different objects like rocks and fallen trees to restrict their access. You will encounter another set of bugs after hopping of the ledge.

Once you start climbing up the mountain, it is time to use your Super Powers to get a multi-kill. You might take some damage at this point but no need to worry about it. And finally, evade the arrows to complete the mission with a 5-star rating.

Time Attack Stage #3
You basically need to finish it as fast as possible. After you make your way through the first pink gate, make sure to use your Super Powers to get a multi-kill; just before heading through the second pink gate. Other than that, this chapter is quite straightforward.

Time Attack Stage #4
This one again is a pretty straightforward chapter. However, you need to make sure that you first take out the robot who could jump on you and you will die instantly. As for your multi-kill, use your Super Power on the three robots standing above the large staircase.

Time Attack Stage #5
This one requires you not to take any damage throughout the chapter and hitting three out of four Golems with a Super Power.

Make sure to evade the arrows using the double jump and as soon as the Golems appear, use your Super Power to take out the three Golems at once. The remaining Golem will deploy shock-waves which can be evaded by jumping over them.

After taking out the final Golem, enter the green zone to finish the stage.

Time Attack Stage #6
Your primary focus should be completing the stage without taking any damage.

Before entering the small archway, make sure to use your Super Power to take out a bunch of enemies. However, you should consider them grouping them together before using the power. Also, keep an eye on the robots with their glowing attacks as they would be able to kill you with only a single hit.

Time Attack Stage #7
This stage is somewhat flexible in terms of the damage you can take. However, you will have to use your Super Power twice to get a multi-kill of total 6 kills. Your first multi-kill should be in the area where you will encounter the first big mech.

You need to make sure that you do enough damage to the big guy before using the Super Power.

Continue along the path and after descending stairs, you will encounter another couples of small robots and a bigger mech. Once again, do enough damage to the big guy and try trapping him against the wall before using the Super Power.

Just before heading through the final gate, use your Super Power once again and go through the green zone to complete the chapter.

Time Attack Stage #9
To get 5-stars on this stage, you need to make sure to use your Super Powers twice and take no damage so as to make up for lost time. The chainsaw kind of thingy at the beginning of the chapter can be evaded fairly easily if you just circle around it and then take it out.

Time Attack Stage #10
Taking damage is not an issue here so it is not that hard. The strategy that worked well for me was taking out the enemies with throwing attacks, first. You should consider using your Super Power at the last wave where the Golem appears. This part is usually quite hard to complete without using the Super Power.

Time Attack Stage #11
There are two ways of completing it; either you can use your Super Power to get a multi-kill or not take any damage throughout the whole chapter. Also note that hitting the lava at the very end of the chapter will affect your 5-star progression so make sure to avoid that.

People have reported some sort of glitch near the gates which tend to break; so make sure to pass them carefully or you may have to restart the chapter.

Time Attack Stage #13
Just as the chapter starts, take out the first guy and take cover near the Yellow Crystal and wait until the second guy’s laser ends and then take him out too. As for the guys on the raised platform, wait until they remove their shield and then attack them. Drop down and take out the two gigantic robots with relative ease.

The next two guys can be taken out by getting near them via gap on the left side of the oil spill. Finally, for the guys shooting green bullets, you may want to stay in the center and advance at the same time.

There is a chance that you will not have enough Yellow Crystal to use your Super Power. Even if you do, make sure to deliver a few hits before using them to make sure you kill them in your first go.

This level can be pretty hard and frustrating and might take a few tries before you complete it.