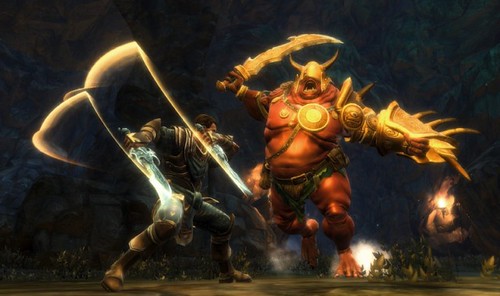 The PC version of Kingdoms of Amalur: Reckoning is quite well made I have to say, as it performs decently and has little hardware demands. However, like almost every other game, it does have room for further improvements.

If someone is actually facing technical difficulties such as crashes and freezes in the game, then they should refer to our Reckoning Crashes and Freezes fixes guide. For those simply looking to tweak what is already supposedly a stable game, this guide will try to cover every essential tweak that is in demand.

For more help on Kingdoms of Amalur, read our Character Builds, Moves and Crafting Guide.

First off, let’s have a look at some preliminary graphics tweaks:

Field of Vision Fix
Many have complained about the FOV in this game. A nice FoV fix is available using the Widescreen Fixer’ utility, which can be downloaded here.

Adjusting Level of Detail
ATI Tray Tools gives you a great way of actually noticeably improving the level of detail in the game. You can adjust the level of detail to a negative value (preferably -2.0) and set the anisotropic filtering to 16x FROM the Tray Tools. Why do this? Well, let’s just say that the in-game options aren’t sufficient enough.

FXAA Injector
The FXAA Injector is a nifty tool originally intended for Skyrim, but can also be used with Reckoning to (and other Directx 9 games) to add significant amounts of detail to them, making them look way better than what the standard options would allow.

You can get this injector from here.

Save File Management
Save files in Kingdom of Amalur are quite a pain to manage, to say the least. This is because of the complexity of the profiling system, which creates a bit of an annoyance when transferring from one PC to another or managing through Steam/Origin accounts.

If you wish to transfer your save files to another computer, you will have to make sure the the profiles are identically named.

If you feel that that is not a possibility, then you must change the name of each save file in such a manner that the game recognizes (by re-using an existing save file’s name).

The ‘personal.ini’ of Reckoning is fairly simplified, and gives a few but essential options to fiddle around with for your needs.

Now, let’s have a look at the variables in this ini file one by one:

Language
Pretty self-explanatory. English is the default; if you have any other language pack available and prefer to use that, you can change it as desired.

Audio_language
The default for audio_language is ‘SameAsTextLanguage’, and really should remain as such for any kind of fully language pack.

I barely know anyone who uses these (some, however, prefer the inverted y-axis), so it’s best to leave it as it is.

CamInvertMouseWheel
Its default value is 1, and it has inverted the front/back movement of the mouse wheel relative to the camera. This is the default system in Reckoning – if you wish to change it, simply change the value to 0.

CamTransitionTime
The default value of this is 50, and there is no real reason to change it in any way.

CamMouseSensitivity
This is the Camera sensitivity with respect to the mouse. Default value is .22500001, and really requires no changing whatsoever.

CamMovementSensitivity
The default value for movement sensitivity is 100. If you are used to lower sensitivities, you might want to adjust it to meet your needs. Be sure of your changes though, as too much will make a drastic reduction/enhancement in sensitivity.

CamWheelSensitivity
This is the sensitivity of the Camera with respect to the wheel of the mouse. There is really no need to change this, unless you feel uncomfortable with the zoom in/out speed of the wheel.

Display Width, Display Height
This is basically just your resolution. The rule of thumb is to play at your monitor’s native resolution, unless you are facing troubles with frame rates, in which you can lower the resolution.

Display Fullscreen
Another self-explanatory variable. If you wish to play in windowed mode, you can set the value to 0.

Display Vsync
Many would actually want to disable this by setting the value to 0. Vsync basically synchronizes the frame-rate with your monitor’s set vertical refresh rate. So, for a 60Hz refresh rate monitor, your frame-rates in the game will be capped at 60.

This has its advantages; it prevents virtual screen tearing. However, the tearing is barely tangible most of the times, and that is why people prefer higher frame rates if they know they can.

RuntimeInternalShaderVersion
Has to do with the Shader Version, and really shouldn’t be fiddled around with.

ShowSubtitles
This really depends on your preference. If you find subtitles disturbing, keep this on 0. If you are like, and prefer double-checking what you hear, then 1 is the value for you.

First off, if you have every video parameters maximized and are playing at the native resolution, and yet are still facing frame-rate issues; you would want to slightly alter the Full Screen Anti-aliasing.

If that doesn’t work, your next go is the resolution, and if that isn’t satisfying you either, then you need to sit down for a while and read on.

Let’s talk Shader Complexity – It’s fairly self-explanatory, minimizing this parameter will obviously minimize the shader quality of the game world, and you’ll notice a darker and blander tinge to the game than before. It doesn’t make the game look terrible, so you might want to give it a try to boost your frame-rates.

Second is Post-Processing. This is a real performance hog in most games, and makes everything look shinier and heavenly. It really is quite a must-have for those who can afford it; but those who can’t might want to turn it off, sacrificing the shiny shimmering bit of everything they see.

Third are the Shadows Options. Personally for me, these are the first to go down after AA and resolution. Reducing the Shadow options will reduce the softness of the shadows, and should give you a few additional FPS.

Well, that’s pretty much it as far as tweaks are concerned. If you have any more in your mind, please feel free to share them with us by commenting below.