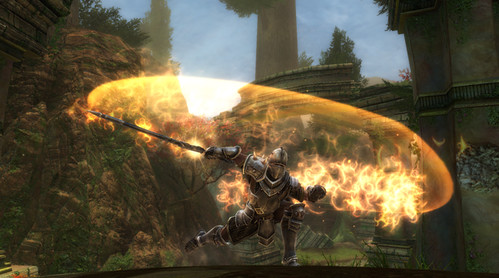 Kingdoms of Amalur Moves are special abilities you unlock while leveling up your character. These moves can be chained into combos to fight difficult enemies as they increase your chance of survival when executed perfectly.

You can cancel any combo or move by double tapping a button, if things don’t go as you expected because a failed move or combo can leave you vulnerable to your enemies in Reckoning.

These moves are associated with your weapon of choice, and as you level up your character, you will unlock more powerful moves. You will be unlocking them simultaneously for different weapons based on your Character Build.

Following are the moves you can unlock for different weapons in Kingdoms of Amalur Reckoning:

Longsword
Upheavel (Attack, Pause, Attack)
A long-sword attack which will throw the enemy into air.

Comet Strike (Hold Attack)
A Longsword attack that slashes your sword into the enemies. REQUIRES Brutal Weaponry I

Minotaur Rush (Hold Attack)
Hold the attack button to perform a heavy hammer-attack onto the enemies. REQUIRES Brutal Weaponry I

Crushing Blow (Parry, Attack)
Lift the hammer and attack your enemy to smash him down after a timed parry. REQUIRES Brutal Weaponry IV

Greatswords
Whirlwind (Hold Attack)
Hold down the attack button to unleash a flurry of attacks. REQUIRES Brutal Weaponry I

Guillotine (Block + Attack)
Block and attack to hit the enemy with a couple of strong slams. REQUIRES Brutal Weaponry II

Gravedigger (Dodge, Attack)
Dodge and use the Greatsword so you can perform a leaping ground strike. REQUIRES Brutal Weaponry III

Gut Thrust (Parry, Attack)
Use the sword after a timed parry to impale and throw the target. REQUIRES Brutal Weaponry IV

em>Shadow Strike (Hold Attack)
Hold the attack button and strike to perform an attack; it can be chained up to 5 attacks. REQUIRES Precise Weaponry I

Crossfire (Attack, Pause, Attack)
A combination of stabs and slices once you attack after a delay, if performed correctly you may get a Critical Hit. REQUIRES Precise Weaponry II

Punishment (Parry, Attack)
A series of rapid strikes if you attack after a timed parry. REQUIRES Precise Weaponry IV

Backstab (Attack)
If the enemy is unaware, then you can stab him from the back. REQUIRES Assassin’s Art

Charged Shot (Hold Attack)
If you hold and charge the bow, then the attack damage will be better.

Arrows Storm (Block + Attack)
Use the longbow to attack while you’re blocking for firing a couple of arrows onto your enemy. REQUIRES Arrow Storm

Twisted Claw (Hold Attack)
Spiral through your enemies by holding the button and release it after a time. REQUIRES Precise Weaponry I

Mage’s Vortex (Block+Attack)
Some of the enemies will be drawn into a central location, in front of you, if you attack after blocking. REQUIRES Arcane Weaponry II

Warding Blast (Block + Attack)
A launching projectile will be sent towards your enemy if you attack while blocking. REQUIRES Arcane Weaponry II

Chakrams
Maelstorm (Hold Attack)
Spin the Chakrams for hitting the nearby enemies by holding and releasing it after a time. REQUIRES Arcane Weaponry I

Elemental Escape (Attack, Pause, Attack)
Damage the enemies and step out of the danger by this delayed Chakrams attack. REQUIRES Arcane Weaponry III

Orbital Blades (Dodge, Attack)
Dodge and use the Chakrams to launch the enemy into the air. REQUIRES Arcane Weaponry IV

Parry (Block)
Block the enemy’s strike before it hits you to Parry it.

Shield Bash (Block + Hold Interact)
Bash your enemies by holding the interact button while blocking to bash your enemies. Requires the Skillfull Defense of Level 5

Go to next page for abilities and brief guide on how to create combos in Kingdoms of Amalur: Reckoning.

Following are the abilities you can unlock in Kingdoms of Amalur Reckoning:

Might
Quake (Attack x3)
Chain up a total of 3 casts so you can cause more damage to the enemies and stun them.

Battle Frenzy (Attack – Toggle)
Berserker rage, the damage is increased as you move on to thrashing the enemies.

Harpoon (Attack)
A harpoon attack to drag small size enemies towards you, if large then you’ll be pulled towards them.

War Cry (Attack)
It will weaken your enemies for greater damages.

Wrath (Attack x6)
Jump and glide to throw the nearby enemies into the air and then strike them down with force, the damage can be increased by the repetition.

Envenomed Edge (Attack – Toggle)
Apply this poison to your weapons (swords and arrowheads) so they can cause a greater or weaken your enemies.

Frost Trap (Attack)
A frost tap that will cause freezing damage to the nearby enemies, when exploded.

Smoke Bomb (Attack)
It’s a bomb which can stun your enemies by deploying a smokescreen; it can be upgraded with poison damage too.

Shadow Flare (Attack, Pause, Attack)
Deploy this magic to disorient your foes, you can throw a volley of blades by pressing the attack button again.

Lunge (Attack)
Simply run to the back of your enemy in a blazing speed.

Storm Bolt (Attack)
Fire a stream of electrical energy which can stun the enemies and cause Lightning, Shocking Damage.

Tempest (Hold Attack)
Hold the button to charge the Storm Bolt and summon a stream of lightning to cause damage to enemies.

Sphere of Protection (Attack – Toggle)
It will protect you so you take a lesser amount of damage, while active. It can be further upgraded.

Ice Barrage (Attack)
Ice masses with sharp edges will be sent into the air to strike your enemies with force.

Winter’s Embrace (Hold Attack)
Keep on holding the Ice Barrage’s button so you create a cloud of ice shards which has a longer duration.

Healing Surge (Hold Attack)
Hold the button to create a greater amount of healing energy, or tap it to restore a little.

Summon Faer Gorta (Attack – Toggle)
Summon a minion who would help you in your battle, its skills can be upgraded.

Mark of Flame (Hold Attack)
Mark different enemies by tapping the button, and then explode them by holding the button.

Meteor (Attack)
A meteor attack from the sky is deployed onto the enemies for a reasonable damage.

Element Rage (Attack x3)
Fire, Lightning and Ice elements combine together to cause a massive chain-attack.

How To Unlock These Moves and Abilities

Following is a brief overview of how you can unlock these abilities in Kingdoms of Amalur Reckoning:

Tier 1 Moves
The Tier 1 moves are unlocked from the Brutal, Arcane and Precise Weapon 1-4, on the left side of the ability tree. Most of these combos are followed by a break, dodge, parry, charge/hold or a block.

The T1 combos are not as powerful as the magical abilities are, but if you apply the status effects, they are quite good.

The weapons may get applied with some other abilities (depending on their sockets), like the freezing ability which will freeze the enemies too. The T1 moves can be followed with another T1 or T2 move.

Tier 2 Moves
The Tier 2 moves are the ones which are related to your magical abilities. They are stronger than the T1 moves and will consume your Mana as well. The T2 moves are usually assigned to the hot-key pad; these are: Wrath, Mark of Flame, Shadow Flare etc.

Note: If you get hit while using your T2 moves will result in getting you stunned, you will not be able to dodge or block for a limited time. The T2 moves can be changed into a T1 move as well.

Launchers
The launchers are used to throw/lift your enemies into the air so you can perform a T1/T2 combo chain. Most of these will require you to have a pause between the attacks, but some may require dodging as well.

How To Create Combos

Combos are usually a chain of different commands (attacks). You combine attacks and chain then up in a sequence to cause a greater damage with a stylish attack onto your enemy.

Most of the combos are easy to perform so you don’t have to keep on smashing the buttons. Some of the powerful combos can even kill your greatest fears.

Combos are fast, and they’ll maximize the amount of damage you can cause with the abilities/skills you currently hold. Some of them may stun your enemy so you can use your slow but powerful attacks easily.

How To Chain Attacks To Create a Combo
All of the combos work in a chain; you will have to pair up different combination of attacks to build a combo. Example: Daggers have to be chained up in a combo of six inputs, hit the attack button six times to unleash a combo (at the 6th animation).

You may change the combo at any stage but the last (finisher) one. There are different ways to stop the combo; you may turn it into Dodge, Block, Parry, Charge/Hold or a Blink. You can do these actions during any of the combo stages but not after the last one is initiated.