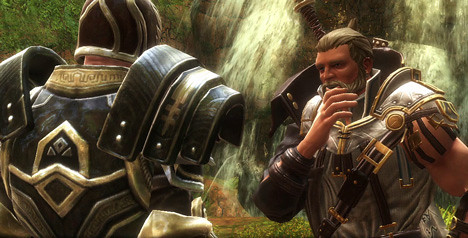 Warsworn are the warriors for hire in Kingdom of Amalur. Unlike Mercenaries, they are very expensive and known for their superior battle tactics and valor. To know about the Kingdoms of Amalur Warsworn quests for this faction, read on below.

The recent war in Faelands has been good for business from the Warsworn perspective and it’s also an opportunity to discover the truth of their glorified history.

Following is a complete quest-line of the House of Warsworn in Kingdom of Amalur. You can unlock two Twist of Fates at the end depending on your choice.

How To Join Warsworn Faction
Gohart Inn, Ost Odura will give you the starting mission “The Commendation”. Once you’ve completed it you can do the other missions followed by The Road Patrol.

The Commendation
As mentioned above, trigger the mission by going to the Gohart Inn (Odarath) and talking to Ost Odura. He will ask you to defeat the Krast brothers and get their daggers. Stay focused and avoid everything other than your main targets. Once you’ve the daggers, run to the Gorhart Inn and talk to Ost Odura without attracting any attention.

The Road Patrol
Ost Odura will ask you for this after you have completed The Commendation. Go to Shieldring Keep, Eastern Odarath. You will get a new task by the keep warden i.e to go and meet the Warsworn ally in Glendara and help him save the cart. Wyl is in the healer’s hut; meet him and go towards the north-side bridge.

You will have to battle a Niskaru Bloodletter, it’s strong and fast. If you cannot fight it then let Ost Odura fight it while you engage it from a range.

If you aren’t ready, you can always let your companions/followers do all the work. Speak to Ost Odura once Niskaru is dead and he will lead you to Brigand Hall Caverns for the next quest.

The Heart of Sibun
Speak to Ost Odura at the entrance of Brigand Hall Caverns (Lorca-Rane) to trigger this mission. You have to invade a dungeon in this quest.

The enemies are strong so you will have to be ready, make sure you level up your characters and buff up its attributes before you attempt this.

Level 15-17 character is recommended for this quest and improve your skills equally while leveling up (including the Detect Hidden Skill). The dungeon has a lot of traps so you will have to be careful.

The enemies in the dungeon are the Niskaru’s again, kill them and keep moving forward until you reach their master. The boss is weak against ice and freezing attacks.

Head into the depths of the brigand cave, destroy all the marchmages, kill the Niskaru and then clear the Dokkalfar Fahrlangi tunnels.

You will have to face a large Niskaru before you can take the Heart of Sibun and head back to the Shiledring Keep to complete the quest.

Lock and Key
Note: You will not be able to buy the Prismere Lockpicks from the merchang in Tirin’s Rest once you’ve accepted or completed this mission.

Return the heart of Sibun at the Shieldring Keep to trigger the quest. Go to Helmgard (Tala-Rane) and the Warsworn leader will send you to The Vault. You will be now accompanied by another NPC who would help you in your battles, so get inside and start cleaning.

There is a secret room in the Vault which can only be seen if you are Detect Hidden Level 4 or higher. Once you’re done here, head towards the Helmgard Keep and you will learn that Gwyn has been accused of assisting Fahrlangi cultists.

She is in the Warsworn’s area, go and talk to her about the key and her parents. Show the vault key to the Castellan and then to the gnome locksmith, who is at Tirin’s Rest for the key forgeries.

There is a secret lab at the backside of the locksmith. Head inside and attack the three Fahrlangi enemies, and search for the gnome once you’re free. When you have the required information, go back to Helmgard Keep and meet Castellan.

The House of No Doors
After completing Lock and Key, speak with Livia (you arrested her in the last quest). She will explain her actions and give you a new target. Head out to the Tywili Coast, near the southern road to Acatha/Galafor and look there. When you find Elbin, speak to him to start the next part of the quest.

Get ready, Elbin and his soldiers will attack but keep your focus at Elbin. He will surrender once you have wounded him and tell you what you want to know.

If you have discovered Rathir, fast travel back for the next part of the quest. When you reach there, head west into Customs House. Look for Grill in northeastern room and try to persuade.

There is nothing challenging here, get some easy kills if you want, avoid if you want. When you reach the last room, prepare yourself for a challenging fight. There is a Mage, 2 melee NPCs and the Boss in this room.

Use your Reckoning and try to take out the boss first, followed by Mage and finally, Melee attackers. Head southwest to meet Gwyn afterwards to complete the quest.

The Isle of Eamonn
Follow Lord Besin to Eamonn Isle. Seek the help of Captain Gonthorn on the Rathir Quays before Tine Delfric acts on Gwyn’s words.

First, find Gonthrom and then search the Island and Fortress. Defeat the mages and examine the mural, and finally, return to Shieldring to complete the quest.

The Mystic Hammer
Your job is to retrieve the Mystic Hammer which can be found in Eagonn’s tomb. To find the whereabouts, you will have to speak with Tine Delfric. Retrieve the hammer from the tomb and travel to Ironfast Keep.

Talk to Gwyn Anwy and after that, go to Hall of Firstworn. Pass the fate-barrier. In order to pass the Fate-barrier, go into fate-shift mode and walk up to the door. If you don’t have to full fate-shift build, hold both triggers and it should work.

Enter the Sacred Passage to re-forge the Mystic Hammer and finally, speak with Gwyn Anwy to finish the quest.

The Mountain Prison
In this quest, you are tasked to defeat Anru Besin who can be found in the prison of Niskaru Lord Khamazandu, in the Cloudcrest Mountain, on the southern edge of the Hollowlands. Travel to Cloudcrest and enter the mountain range. Climb to the mountain peak and you will come across Khamazandu’s Crown.

You need to destroy all those pillars. You can do that by equipping Mystic Hammer you retrieved in the last quest. Encounter Anru Besin and defeat him after that.

When you are given ‘Make me your instrument/That will never happen’ choice, if you choose thumbs up, you can unlock Khamazandu’s Gift quest.

If you choose thumbs down instead, go speak to Gwyn Anwy and after that, return to Hall of the Firstsword. Finally, speak to Tine Delfric to finish the quest.

You will unlock Truesworn Twist of Fate at the end of this quest – +1 to Might Abilities, +10% Chance to Critical Hit vs. Niskaru, +6% Stun Duration.

Khamazandu’s Gift ‘Quest’
If you choose thumbs up option in ‘The Mountain Prison’, you will unlock this quest. Choose to become an instrument of Lord Khamazandu and to prove your loyalty to the cause, you must kill Gwyn Anwy, who can be found on the pass below.

You will unlock Forsworn Twist of Fate at the end of this quest – +10% Physical Damage, +1 to Might Abilities, +%5 Fire Damage.

Found anything missing ? contribute away!